Rich People are Fleeing New York, But Not Because of the Coronavirus 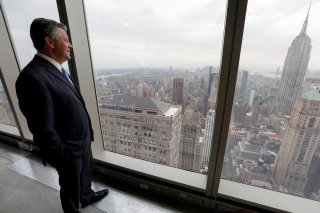 Three years ago, Italy introduced an attractive tax regime designed to attract the super-rich, who only have to pay an annual flat tax of €100,000. In its first year, the tax had only ninety-nine beneficiaries, a number that has since more than quadrupled. In the 2019 tax year, the most recent for which figures are available, 421 super-rich individuals have succumbed to Italy’s alluring tax policy and transferred their residences to Italy.

The flat tax, more correctly a fixed tax, is applicable for up to a maximum of fifteen years and replaces personal income tax (known in Italy as Irpef tax) on income earned abroad, which helps to explain why it should be so attractive to those who have assets and businesses outside Italy. In 2019, the 421 super-rich beneficiaries of the new tax regime contributed at least €42 million to Italy’s tax coffers—plus an unknown amount from family members. Of course, that is not a lot, but Italy never introduced its fixed tax to generate significant direct tax revenues. Far more, the tax is designed to attract the super-rich because they spend more on luxury goods, which has a positive impact on value-added tax (VAT). Politicians also hope that the first wave of super-rich beneficiaries will attract even more rich people to the country, with all the benefits that entails. Perhaps the most important aspect of the new tax regime is its psychological effect—and this is often overlooked. Once a country proves itself hospitable or inhospitable, word soon spreads among the super-rich community.

Take Germany, for example. Many rich people are not so much bothered by the tax burden as they are by the hostile social atmosphere. The media and political speeches constantly portray the rich in a negative light. In 2015, Germany opened its doors wide to poor people from all over the world, but the rich remain unwelcome. Over the last few years, frequent media reports have stated that several thousand millionaires leave Germany every year. Many, for example, move to Switzerland. And, if Germany’s three main left-wing parties, the SPD, Greens and Die Linke, were to win this autumn’s general election, then there would certainly be many more.

New York Is Alienating the Rich

Even in New York, the city with the most dollar billionaires in the world in 2020, the political tide has turned on the rich. One example of the recent shift can be seen in New York City’s housing policy, which increasingly regulates the market. Left-wing Democrats such as New York’s Rep. Alexandria Ocasio-Cortez, who brands herself as a socialist, are leading a campaign against the rich. The coronavirus pandemic has also seen the rich held up as scapegoats. A variety of U.S. media outlets have regularly been running furious and sensationalist stories about the “exodus” of rich people leaving New York to escape the coronavirus.

But there is much more to the story of rich people fleeing New York than the coronavirus. The Financial Times recently published an op-ed under the headline “Big money ditches New York, moves family to Palm Beach,” which noted that the center of gravity of the hedge fund, private equity and family office world has been shifting to Florida. More specifically, it has been relocating to Palm Beach and West Palm Beach. “The move by the industry had already started,” an unnamed Palm Beach investor claimed in the op-ed. Admittedly, the departure is not something the money managers want to publicize. For example, when Elliott Management announced its West Palm Beach office expansion, the firm stressed that it would keep space in New York and open some space in Greenwich, Connecticut. The op-ed also quotes an anonymous wealthy hedge fund manager as saying, “We do not want to draw attention to our top people moving. But after the end of March, anyone from portfolio manager above will have their electronic key cards disabled for the New York office.”

Paradoxically, one reason that the rich have departed New York in such great numbers is Trump’s tax reform, which was generally very positive (in general and also for the rich), but which also had a downside for New Yorkers. Before the reform, taxpayers were able to deduct the very high state taxes in New York from their federal taxes. That is no longer allowed under Trump’s reforms. New York’s richest residents have borne the brunt of the city’s high taxes, so it is perhaps not all that surprising that they have increasingly reacted by relocating to the sunny and more tax-friendly states of Florida or Texas. And the extent of the exodus is not only evident from tax statistics, but also from other indicators. At Palm Beach Day Academy, one of Florida’s most exclusive private schools, for example, applications were up by 124 percent during the peak pandemic period from March to September 2020. Most notably, almost half of the school’s new students were from New York City and its surrounding suburbs.