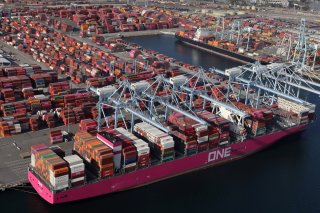 Before World War I, the United States relied on a combination of U.S.-flagged vessels and foreign vessels to conduct trade across the Atlantic, in U.S. coastal waters, and across our inland waterways. As the Great War approached, allied and enemy countries alike withdrew their vessels from U.S. commerce to aid their own war efforts. Our potential adversaries also wanted to hamstring the U.S. economically by disrupting maritime trade.

To prevent such a crisis from occurring again, following the War, Congress enacted the Merchant Marine Act of 1920, commonly known as The Jones Act. The Act dealt with cabotage, a term defined as “trade or navigation in coastal waters, or the exclusive right of a country to operate the traffic within its territory.”

The Jones Act sought to ensure that only American-flagged and American-operated ships conducted trade within the sovereign coastal and inland waterways of the United States. It was hoped that the act would ensure the security of trade within the United States and create a supply of merchant marine vessels, as well as trained mariners, that could be readily tapped in the event of another conflict.

The Jones Act proved effective. Two decades later, over two hundred thousand Merchant Mariners and hundreds of commercial ships served in World War II. They made a vital contribution to our victory over the Axis powers.

Seventy-five years of post–World War II peace between the great maritime powers seems to have obscured for some U.S. political and business leaders—the original reason for the Jones Act. They argue that the Act stifles competition in the shipping sector and, thus, increases costs for American consumers. The Government Accountability Office investigated the effect of the Act on consumers, and it found the impact to be negligible.

Unfortunately, the world remains a dangerous place and the original purpose of the Jones Act is still relevant. For example, we saw the impact of a cyber-attack on the Colonial Pipeline last month. Foreign hackers in an adversary nation infiltrated the Pipeline’s system and blocked the major gasoline artery of the entire East Coast. This attack led seventeen governors to declare states of emergency.

Now imagine a future without the Jones Act, where Chinese-flagged vessels all controlled, in whole or in part, by the Chinese Communist Party—were able to freely dock at our domestic ports, cruise our coastlines, and travel up and down our inland waterways. From the St. Lawrence Seaway in the Great Lakes right through our heartland on the Mississippi River, the Chinese Communist Party would have virtually unrestricted access to essential American economic arteries. That access would position our adversaries to do far greater damage to American infrastructure than the pipeline hackers ever imagined.

Moreover, the American merchant marine and civilian shipping industry would be virtually eliminated by state-subsidized Chinese vessels, just like our manufacturing and industrial base were severely damaged by predatory Chinese practices over the past two decades. And critically, the reserve of merchant mariners and civilian cargo ships we require in the event of conflict would be significantly eroded.

During my tenure as U.S. National Security Advisor, I saw numerous indications that the frightening picture described above could become a reality without sound public policies. In addition to maintaining our military advantage in the emerging great-power competitions of the twenty-first century, America must nurture a robust and resilient industrial base connected by our critical maritime arteries. The Jones Act is a critical tool in that effort and must be preserved and strengthened for the decades ahead.