A Ron DeSantis-Kristi Noem 2024 GOP Ticket: A Problem for Biden? 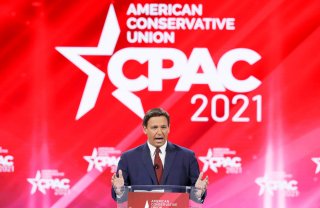 Ever since Florida Gov. Ron DeSantis’s strong appearance at the Conservative Political Action Conference (CPAC) last week, the governor has seen bold support from conservatives and pundits alike, pushing him closer to bear Donald Trump’s political mantle and toward a potential presidential bid.

DeSantis opened the conference in his home state, where he boasted his record on handling the coronavirus pandemic, saying “Florida got it right and the lockdown states got it wrong.” The governor later found himself as a top potential contender for a 2024 presidential run in a CPAC straw poll, as he placed right behind Trump.

“While the media tends to think first of senators as leading contenders for presidential nominations, the fact is that governors have had a stronger track record. That's especially true for Republicans—the last Republican president who served in the Senate was Richard Nixon. So it makes sense to look at current Republican governors for their next ticket,” Jonathan Krasno, a political science professor at Binghamton University, said.

A recent survey from Mason-Dixon Polling & Strategy revealed that DeSantis garnered an approval rating of 53 percent among Florida voters, an eight-point increase from the same poll in July. Another Florida poll showed him rallying 64 percent of support in a hypothetical three-way race against Florida GOP Sens. Marco Rubio and Rick Scott in a 2024 presidential primary, as all three are speculated to run.

But DeSantis’s popularity blossomed before his CPAC speech largely due to his response to the pandemic, where he took a hands-off approach by not shutting down the Sunshine State and by not implementing a statewide mask mandate, a strategy that earned extensive Republican Party grassroots support. Though, Florida did suffer heavy blows during the public health crisis, as it hovered as a hotspot for new coronavirus cases per day and has experienced more than thirty thousand deaths from the deadly disease.

Even with these alarming statistics, DeSantis and Republican supporters have defended his strategy by emphasizing his priority to restore the economy.

“If you are working hard to earn a living, we got your back in the state of Florida,” DeSantis said during an address on Tuesday.

The governor has also championed his vaccine rollout since the state has administered more than five million doses as of Wednesday.

“We are prioritizing our senior citizens for vaccinations,” DeSantis said. “Florida is putting seniors first because it is the best strategy to save lives and is the best way to honor our elders from whom we draw inspiration.”

And beyond a successful coronavirus response that has crafted him a firm Republican ledge, DeSantis has been a staunch supporter of Trump, defending his claims of voter fraud and the rejection of the 2020 election results. The former president still holds an iron-like grip over the GOP, so echoing Trump’s ideology would put DeSantis in a strong spot heading into the 2024 presidential primaries, as it’s likely that the MAGA coalition, as well as Trump-associated party members, would back the governor’s candidacy.

Before taking a look into the 2024 presidential election, however, DeSantis still hasn’t indicated whether he’s running for reelection in 2022. But if he does decide to run for another term, a victory would nearly guarantee an uplift to his White House candidacy.

“One key issue will be DeSantis’s reelection. If he focuses on a presidential campaign and ignores his reelection bid, then he could be in trouble,” Dr. Steven Tauber, a political science professor at the University of South Florida, said.

Tauber also noted that DeSantis “barely won the first time,” considering he beat his Democratic opponent by less than one percent in a historically swing state. “If he loses reelection, or even barely squeaks by, then his presidential stock will drop.”

But if he does decide to run for president, who would join his ticket as vice president?

Perhaps a lawmaker with similar ideological beliefs who is also widely interested in higher office, but doesn’t have the national name recognition to garner a White House win in 2024.

South Dakota Gov. Kristi Noem (R), an ardent Trump loyalist and anti-certifier of the 2020 election results, has brewed considerable popularity in recent months, due to her removed approach to handling the pandemic and close ties to the Trump family.

“Both DeSantis and Noem have gained prominence for what critics describe as their Covid denial and what admirers describe as their determination to keep their states open. So both are selling the same product, but DeSantis has the advantage of coming from an extremely important swing state while Noem's state is a tiny GOP stronghold,” Krasno said. “If both were candidates for the nomination, he'd have to be considered the stronger of the two because of his state and the huge amount of fundraising he could do there.”

Noem scored a key speaking spot at the Republican National Convention in January, as well as at CPAC over the weekend. She also will get to mingle with Republican donors this weekend at Trump’s Palm Beach resort, Mar-a-Lago, for a fundraiser for her reelection campaign, an event that will be hosted by Donald Trump Jr. and his girlfriend, Kimberly Guilfoyle.

“Noem also is promising and represents a different emphasis within the Republican Party, recruiting women and minority candidates,” Kirby Goidel, a political science professor at Texas A&M University, said. “Those efforts paid off in the 2020 congressional races. Her drawback is she is the governor of a small conservative state, so the question would be what sort of appeal might she have to a larger and more politically diverse electorate? But this is treating her more like a presidential nominee. As a VP pick, this would matter much less and the presence of a woman with governing on the ticket would be helpful.”

In the CPAC straw poll that took Trump out of the mix of 2024 presidential candidates, Noem finished second, with 11 percent, behind DeSantis, who earned 43 percent of support. The duo is clearly a popular match among avid Trump supporters, as they were the only speculated candidates that earned double-digit support when the former president wasn’t included in the roster.

“Were they to join forces on a single DeSantis-Noem ticket, it would seem to me to be as close to Trump as the Republicans would likely be able to get without actually having a Trump on the ticket,” Krasno said. “There's not a lot of evidence to suggest that voters who turned out for the former president in 2016 and 2020 will be satisfied by anything less than Donald Trump Sr. on the ballot, but since neither is a Washington insider like any senator would be they can continue to play some of the same outsider notes that served Trump so well.”

Tauber, however, surfaced some uphill battles the two may face that are largely dependent upon President Joe Biden’s popularity in 2024.

“If President Biden heads to reelection still popular, then I do not see that ticket doing well. They will win the Trump base, but they won't expand much beyond it. They will struggle in the suburbs,” Tauber said. “Both have been controversial dealing with COVID. South Dakota is among the top ten states for death rates, whereas Florida is in the middle.”

He added that if Biden isn’t as popular, “they might fare better.” It’s important to note that the president has not yet announced his plans for a second White House term.

But if DeSantis does ultimately decide to inherit Trump’s leadership over the GOP alongside Noem, he can label himself as the governor who stomped on the chimes that Florida was a swing state, since Trump won its support by nearly four percentage points, the widest margin since former President George W. Bush in 2004.

“The biggest question is where is Trump? If Trump does run, I would guess DeSantis is likely out because they'll appeal to the same voters. Regardless, I think both he and Noem will be in the conversation,” Goidel said.