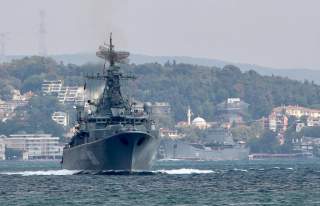 Since the Kursk submarine tragedy back in 2000, the Russian Navy has enjoyed a string of almost uninterrupted successes. It has been hard at work reconstituting its undersea prowess, fielding reasonably effective new generations of quiet nuclear submarines (both SSBN and SSGN), while topping off with a rather potent quotient of diesel submarines too. Showing a certain new spring in its step, the Russian Navy has been putting more ships to sea for longer periods. That achievement was only slightly marred by the not particularly glorious sortie of the Admiral Kuznetsov into the Mediterranean during late 2016.

Yet, on the whole the Russian Navy has provided the Kremlin with credible combat and deterrent power in the many, recent small wars along Russia’s volatile southwest flank, from Georgia to Ukraine to Syria. In particular, the Russian Navy has demonstrated its rather long reach in Syria by employing a steady barrage of land-attack Kalibr cruise missiles from a variety of naval platforms, including submarines. While the Russian Coast Guard was the primary actor in the November 2018 Kerch Strait Crisis, Russia’s formidable Black Sea Fleet has ensured that NATO military counter-measures in that sea area remain generally unpalatable. Then, there are significant naval efforts to support Russia’s new emphasis on the Arctic, including the new navy icebreaker Ilya Muromets that is now on regular duty. Finally, the Russian Navy has also contributed to the list of new “superweapons” with the revolutionary Poseidon—a nuclear-powered unmanned underwater vehicle (UUV) that can deliver a thermonuclear warhead against an adversary’s port, thus bypassing missile defenses.

To be sure, President Vladimir Putin has demonstrated a certain fondness for Russia’s fleet. But there actually could be substantial disquiet among Russian naval strategists, at least if an early April unsigned Russian-language article published in the military magazine Military Review [Военное Обозрение] is indicative. This quite detailed analysis focuses on the surface fleet, but implies that the force is in considerable disarray. Knowing as we do that Russian defense expenditures amount to less than a paltry 10 percent of total NATO defense spending, it would be quite reasonable for Russian strategists to simply demand more resources to meet requirements. That is actually not the approach taken by this author and this is clear from the story’s title: “Money for the fleet was there. Even that was wasted [Деньги на флот были. Их даже потратили].” That this spicy Russian-language article was not signed may be partially explained by the fact that it does not pull any punches in directly criticizing the Kremlin’s approach to naval strategy.

A single illustrative picture appears in the article and a brief caption explains that it shows a naval pier at the Kronstadt Naval Base outside of St. Petersburg. The problem readily apparent in the photo neatly summarizes the entire analysis. It shows six corvettes and light frigates side-by-side. Of these six vessels, “none of the warships are identical [Ни одного одинакового корабля],” and most are completely dissimilar. Thus, the author decries a system that fails to properly evaluate naval strategic challenges and is all too inclined to fritter away the admiralty’s resources on risky designs to satisfy greedy and narrow-minded shipyard directors. Economic and also combat efficiency both suffer, as a result. The author points his finger at “corruption,” as well as “the poor education of the senior political-military leadership [Безграмотность высшего военно-политического руководства].”

The analysis is not entirely pessimistic about Russia’s surface fleet. The author praises the type 11356 Admiral Grigorovich frigate (three units completed) as a “much needed step for the fleet” that “afforded some kind of forces to the Black Sea Fleet [позволило иметь хоть какие-то силы на Черноморском флоте].” Another frigate class, the type 22350 Admiral Gorshkov-class (one completed and three in build), also rates as possessing “high combat value [высокую боевую ценность].” Likewise, the Steregushchiy-class corvette, type 20380 (six completed and four in build) comes in for praise and the author suggests even that production of this vessel should be substantially increased.

On the other hand, he claims several other naval surface projects have resulted in major failures. Thus, he calls the project 20386 a significant “harm” for the country and suggests “most likely, [it] will never be built.” The author is perhaps harshest on the type 23361 Buyan-class corvette (seven units completed and five in build). Noting that they are reasonably effective as missile-wielding platforms, he decries that they are built for only one purpose and are not suitable for significant offshore missions. It is explained, moreover, that these vessels are completely lacking in air defense and in anti-submarine warfare capabilities. “Even the noisiest and oldest submarine could sink [this corvette] in significant numbers [даже самая захудалая и древняя подлодка может потопить их в таком количестве]. Likewise, “a meeting with a helicopter, armed with anti-ship missile, could also be fatal [встреча с вертолётом, вооружённым ПКР для этого корабля также смертельна].” Here, the author makes the interesting observation that Washington’s decision to leave the Intermediate-Range Nuclear Forces (INF) Treaty has also altered the value of this corvette, since “soon cruise missiles will be mounted on automobile frames [Скоро крылатые ракеты можно будет ставить на автомобильные шасси].”

After the “expensive fiasco” outlined in the previous paragraph, the next light frigate type 22800 Karakurt-class (one finished, one in trials, nine in build and seven more under contract) is said to be only in a marginally better status. This vessel is reported to have better seakeeping qualities, but also is similarly criticized for completely lacking anti-submarine warfare (ASW) armaments. The author contends that this ship’s value is also diminished by the demise of the INF accord. However, the biggest complaint about this particular program is that “it is incomprehensible, [but] the diesel [engines] will not be given over in the necessary numbers [непонятно, дизеля в нужном количестве …. давать не будет].”

Noting that for almost all the shipbuilding programs listed above, there is “not precise data [нет точных данных] on expenditures,” it is concluded that over half a trillion rubles have been spent on developing small surface combatants for the Russian Navy with quite imperfect results. The analysis does not offer an analogous review of Russia’s submarine programs, but the author saves some of his most bitter criticism for the much discussed Poseidon (Status-6) doomsday nuclear UUV system. Here, he complains that already the equivalent of billions of U.S. dollars have been spent on the program, but “there is not yet a single working torpedo prototype [что ни одной работоспособной торпеды ещё нет].” At the end of the essay, this author seems to take direct aim at the Russian president, when suggesting that instead of a balanced fleet, the Russian admiralty is stuck with “pictures and cartoons of mega-torpedoes, apparently the most expensive pictures and cartoons in the world [картинки и мультфильмы с ядерной мегаторпедой, по всей видимости, самые дорогие картинки и мультфильмы в мире].”

In the final analysis, this author offers a harsh rendering: “we observe wild disorder and wavering, throwing from project to project and the endless use of budgets by greedy commanders of the shipbuilding industry, as a result of which, instead of at least some kind of fleet, the country has a cluster of incomprehensible ships build for uncertain tasks… [мы наблюдаем дикие разброд и шатания, метания от проекта к проекту и бесконечные освоения бюджетов жадными командирами судопрома, в результате которых вместо хоть какого-то флота страна имеет скопище непонятно каких кораблей, построенных для непонятно каких задач].” Perhaps the author could feel better about Russia’s small surface fleet if he compared it to the American Littoral Combat Ship program that has also confronted numerous challenges. For an example to both Washington and Moscow, Beijing has notably wielded a successful and seemingly efficient parallel program of both frigates (Type 054) and corvettes (Type 056), and China appears to be reaping the strategic benefits.

For Western readers, this summary of a rather candid Russian naval analysis certainly implies that the Russian military is stretched to the bone in order to cover its present defense commitments. The obvious focus on small, surface combatants (vice larger surface ships), does imply a defensive strategic orientation that goes against much hype regarding an imminent “Russian threat.” This window into Russia’s military industrial complex suggests that Russian strategists are anxious and scrambling to prepare adequate military capabilities. Some Western planners may take heart at seeing an “adversary” sweat, but a stressed opponent is not necessarily a good thing in the nuclear age and arms races are generally a lose-lose proposition. Most assuredly, we would all (including Russia) be significantly better off with a step-by-step lowering of tensions in Eastern Europe.