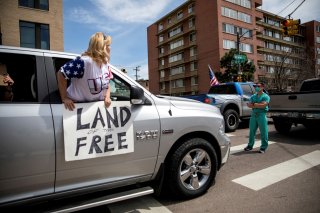 In an effort to contain the coronavirus, many governors are relying on emergency powers to issue orders requiring self-quarantining, restricting business activity, banning gatherings, and limiting mobility across entire regions. These shutdowns have eviscerated more than thirty million jobs, threatened countless businesses with insolvency, and disrupted core civic activities.

Many private citizens and some state legislators have had enough. They’re challenging the validity of these orders on the grounds that they violate both separation of powers principles and due process.

Regardless of how these shutdown orders fare in court, legislators should act now to more clearly define emergency powers and quarantine laws.

This fundamental division of power is being sorely tested at the moment. In many states, legislatures have granted governors broad emergency powers designed to enhance public safety. While most such laws have been utilized to deliver aid to areas impacted by natural disasters, such as hurricanes, blizzards, earthquakes, and floods, they are clearly designed to be temporary. The application of such laws to deal with the current pandemic—resulting in stay-at-home orders, the shutdown of so-called nonessential business, and the curtailment of other civil liberties such as an American citizen’s ability to associate with others in large gatherings—is certainly stretching the limits of what “temporary” means in this context.

Governors are also issuing broad stay-at-home orders by relying upon a nontraditional interpretation of their quarantine powers. In Michigan, for instance, the statutory code explicitly says that quarantine requirements may not apply to entire “classes of people.” Yet, the governor’s order applies to all residents of the state, regardless of whether they have a reasonable likelihood of transmitting the coronavirus.

Importantly, many governor's executive orders have the “force and weight of law.” Violating these “temporary” edicts can result in civil fines and criminal penalties, including incarceration.

This is serious business. Handing a governor the ability to define what conduct constitutes a violation, establish the penalties—including criminal penalties—for such violations and then pursue those who engage in that conduct with nary a peep from the legislature is an affront to the separation of powers principles.

The arbitrary and heavy-handed application of these orders is stoking unrest and economic collapse. These emergency edicts often seem divorced from rationality.

For instance, shutdown orders typically levy commercial restrictions based on whether the business is classified as “essential” or “nonessential” instead of imposing restrictions based on standardized risk parameters. In many locales, liquor stores or marijuana dispensaries are deemed essential and remain open, while shoe and clothing stores are deemed non-essential and remain closed.

Restrictions on religious and other social gatherings are likewise baffling. Shopping at Costco with five hundred others is permitted; attending an outdoor concert or religious service with social distancing precautions is not.

Yes, some exigent circumstances may warrant a governor’s application of emergency powers without first seeking legislative approval. The necessity for unilateral executive action fades, however, as deliberative bodies are able to convene, fully review the situation, and decide whether the governor’s exercise of emergency powers was or is still warranted under the circumstances.

Three months into the coronavirus pandemic and some governors continue to brush aside the constitutional dichotomy between legislative and executive functions. The time to reassess things has certainly arrived.

With this in mind, state legislatures should review (and possibly revise) their statutory grants of emergency powers that accompany their communicable disease laws in light of the changing conditions and the extraordinary executive actions taken throughout the coronavirus pandemic. The emergency powers granted to a governor to combat a pandemic should be clearly defined and limited. They should also be subject to constant oversight and periodic review. Any such declaration and related restrictions should expire within a set amount of time unless the legislature affirmatively grants an extension.

The law should also make clear that a governor lacks the authority to unilaterally quarantine or isolate groups of people unless it is known that they are exposed to someone confirmed to have the communicable disease. Only those with the illness or reasonably likely to be infected can be forced to isolate. Any broader quarantine order applied to the entire state or municipality should be affirmatively approved by the legislature and periodically reviewed.

The health threat from coronavirus may have peaked. However, the threat to America’s economic prosperity and constitutional liberties posed by emergency declarations will remain elevated without action by state legislators. Future economic damage, societal unrest, and litigation can be avoided by replacing vague statutory language with clear parameters for emergency powers and ensuring full expiration of emergency powers without affirmative legislative approval. A full accounting of the emergency measures taken should be made while the turmoil is still fresh in everyone’s minds.

Yes, the actions of many elected officials were taken in good faith, and we realize that hindsight is twenty-twenty. But we also know that this pandemic may continue for a while and there may be future pandemics. Now is the time to take stock of what has happened. If not, as Sir Winston Churchill once said, “Those who fail to learn from history are condemned to repeat it.”

Joel Griffith is a research fellow specializing in financial regulations at The Heritage Foundation (heritage.org). John G. Malcolm is Vice President of Heritage’s Institute for Constitutional Government, and Director of its Meese Center for Legal & Judicial Studies.