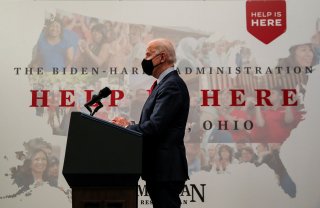 It’s a familiar Washington ritual: A few weeks or even just a few days after a new U.S. president takes office, the self-proclaimed experts start deconstructing the foreign-policy “doctrine” of the new White House occupant—the assumption being that these foreign policy decisions are powered by certain intelligent design, promoted by the best and the brightest, and eventually embraced by the Leader of the Free World.

Now, given the challenge the United States is facing from China, when it has become so chic to talk in foreign policy circles about the new cold war, adding to the chatter about the doctrine “thing,” is the raising of the specter of the almost mythical Long Telegram. This is the telegram that George Kennan sent in 1946, which supposedly drew the outlines of the coming global confrontation with the Soviet Union and gave birth to the Truman Doctrine.

Never mind that there are one-thousand-and-one reasons why no one should compare the Soviet Union in 1945 to China in 2021, or that Kennan himself ended up being a leading critic of the Cold War strategy.

The bad news for political scientists and presidential speechwriters is that much of what happens in the foreign-policy arena under U.S. presidents, including important decisions, amounts to ad hoc responses to outside events at home and abroad. They are driven by personal and political considerations and lack a coherent design. They are in essence in most cases reactive and not deliberative and involve what we may describe as “muddling through,” an evolutionary process that results in outcomes that were not necessarily planned or expected, those “unintended consequences.”

From that perspective, Washington’s military intervention in Southeast Asia in the 1960s and 1970s was very much an outcome of that kind of evolutionary process under which presidents were drawn gradually, pressured by a succession of crises—and sometimes without any serious planning—into a regional military conflagration with enormous costs in lives and dollars to the American people, not to mention the costs to U.S. diplomatic credibility. No president had designed the Vietnam War, although the term “U.S. military intervention in Southeast Asia” is more appropriate, but many presidents were sucked into that war.

In general, adding “doctrine” to the name of a president assumes that he made a series of decisions and statements that amounted to a coherent foreign policy and reflected a certain view of the international system.

But even Harry Truman’s tough approach toward the Soviet Union should not be seen in retrospect as the making of a doctrine. Instead, it marked the beginning of a long and complex evolution of American grand strategy during the Cold War, “grand strategy” being the “purposeful employment of all instruments of power available to a security community,” according to the venerable British military historian B. H. Liddell Hart.

Hence “containment” was the central component of American grand strategy during the Cold War, and the coherence and consistency of each of the presidential doctrines reflected their reliance on that grand strategy as well as their interpretation of it.

Containment rested on the assumption that Washington would provide support for other nations imperiled by Soviet communism. In a way, most of the presidential “doctrines” that followed—like those named after former presidents Dwight Eisenhower, Richard Nixon, Jimmy Carter, and Ronald Reagan were variations on a theme, responding to the perceived Soviet threat during the Cold War.

But since the end of the Cold War, Republican and Democratic presidents, Congress, and the rest of Washington have been unable to devise a coherent U.S. grand strategy to replace the one that was pursued during a confrontation with the Soviet Union.

The absence of a grand strategy explains why none of the four post–Cold War presidents have been able to draw the outlines of a consistent foreign-policy “doctrine.” Instead, Washington under these presidents has been pursuing a series of not-so-new ad hoc responses to foreign threats and crises.

The main goal of these four presidents has been to maintain the global status quo and allow the United States to sustain its global primacy by selecting the most cost-effective way to contain potential challengers to U.S. primacy.

Under President George W. Bush there was an attempt to design a new grand strategy in response to the 9/11 terrorist attacks, including by embracing pre-emptive action and democracy promotion.

But that exercise in strategy building proved to be too costly, and Bush eventually retreated back to the same kind of non-doctrine pursued earlier by former presidents George H. W. Bush and Bill Clinton and later by Barack Obama: one of muddling through, adapting to a very complicated international system where problems are not susceptible to black-and-white solutions and neat answers, or doctrines.

From that perspective, all the talk about President Donald Trump attempting to wreck the international order reflected the exaggerated fears of his interventionist critics and the unfulfilled hopes of his anti-interventionist supporters.

When it came to pursuing foreign policy as opposed to the bombastic rhetoric, both Obama and Trump have adjusted to the post-Iraq-War consensus of ending regime change and democracy promotion in the Middle East and refraining to being dragged into new military adventures in the region, which excluded any plan to do an another Iraq War, this time in Iran.

If anything, in their own separate ways both Obama and Trump, and now followed by President Joe Biden, have supported the idea of shifting America’s geostrategic focus from the Middle East to the Indo-Pacific region and the need to take steps to respond to the challenges posed by China.

If the neoconservative intellectuals and operators who have attempted to exploit the 9/11 attacks to create the foundations of a post–Cold War strategy, then that involved U.S. control of the Greater Middle East, today’s powerful contingency of China-hawks are trying to do the same. They are taking advantage of the growing tensions with Beijing over numerous economic and military issues, to force on Washington their preferred grand strategy: A new Cold War, this time with China.

In retrospect, it’s clear today that Washington could have responded to the 9/11 attacks and the threat of terrorism through a series of pragmatic responses that didn’t require the launching of the costly and disastrous Iraq War. The Biden administration would do well to reject the advice of those who are trying to draw the United States into a cold, and perhaps eventually a hot, war with China. Continuing to muddle through may not sound very exciting, but it remains the most cost-effective way in dealing with China and other global challenges.