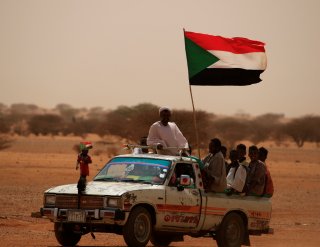 KHARTOUM — Sudan is in crisis. Omar Hassan Ahmad al-Bashir, Sudan’s former dictator, was deposed in 2019. The transitional government that followed Bashir included representatives of the military and civil society. However, the power-sharing arrangement collapsed and security officials took control. Sudan has not had a government for more than a year. Conflict is resurgent in Darfur and other war-torn regions such as South Kordofan and Blue Nile State. Meanwhile, Russia is taking advantage of the chaos to plunder the country’s mineral wealth, extracting gold to support its war machine.

Without a government, the vacuum was filled by bad actors such as the Wagner Group, a private Russian mercenary force headed by Yevgeny Prigozhin, who admits to supporting malign influence operations against U.S. elections. The Wagner Group has exploited Sudan’s gold resources and fomented conflict between ethnic groups.

The day that Russia invaded Ukraine, Hemeti happened to be in Moscow with a trade delegation. However, Hemeti acknowledges that the Russia trip was a mistake and now seeks closer cooperation with the United States.

Whatever mistakes were made, Washington should now engage security officials in a dialogue in service of peace and progress in Sudan.

During my meetings in Khartoum earlier this month, Hemeti endorsed a new civilian constitution for Sudan and the holding of national elections in 2023. He insists that civilian groups—the Forces for Freedom and Change (FFC) and the Resistance Committees—must be a part of Sudan’s future democratic government, warning that any agreement without their participation will fail and exacerbate conflict in the country.

Moreover, Hemeti criticized Islamists associated with Bashir, deploring their efforts to infiltrate the state bureaucracy and change the character of Sudan by institutionalizing Islamism.

Hemeti supports a national program of transitional justice, insisting that security personnel, including members of the Rapid Support Forces (RSF), which allegedly committed crimes against the Sudanese people, should be investigated and held accountable. He also backs a system of truth-telling that draws on Sudan’s traditions and international best practices in order to advance sustainable peace, healing, and national reconciliation.

All my Sudanese interlocutors lament divisions in Sudanese society. They recognized that dialogue is critical to build consensus for the country’s political transition.

However, the generals must be judged by what they do—not what they say.

Burhan and Hemeti should support a single military under civilian control. Additionally, security officials who committed crimes against the Sudanese people should be prosecuted. We are still waiting to hear from the commission investigating the events of June 3, 2021, when civilian protesters were killed and their bodies dumped into the Nile River.

If security officials can overcome their differences, civil society will coalesce around a plan to restore civilian rule. The FFC and the Neighborhood Resistance Committees have fundamental disagreements, with differences of personality compounded by divergences over Sudan’s constitution. The FFC believes that the 2019 constitution should be upgraded, while the Sudan Bar Association has redrafted the constitution entirely to start from scratch. Their different approaches must be reconciled.

Violent conflict in Darfur and Sudan’s peripheries is resurgent. The 2020 Juba Agreement calls for reorganizing the security forces and the army, providing a roadmap for transitional justice, including compensation and reparations, as well as a formula for ethnic groups to participate in Sudan’s political transition. Groups in eastern Sudan that did not sign the deal should be engaged as part of a broader effort to revitalize the agreement.

The Sudanese are divided, but they agree on the need for a more proactive role by the United States. They want the Biden administration to help mediate between segments of the security sector, civil society factions, and the military and civil society.

Importantly, a new government needs a clear position towards Russia. Specifically, Russian president Vladimir Putin’s plan for a naval air base on the Red Sea must be thwarted.

The United States wants to end the crisis that has plagued Sudan for decades. Washington is the largest provider of humanitarian assistance to Sudan, but open-ended relief is not sustainable.

Additionally, the United States has a national security interest in helping the Sudanese resolve their differences and form a civilian-led government. Stability in Sudan would have a ripple effect across the Horn of Africa, impacting war-torn countries such as Ethiopia and Libya. Absent effective engagement by the United States, Russia is waiting in the wings to intensify its economic exploitation and malign anti-democratic activities.

David L. Phillips is the Director of the Program on Peacebuilding and Human Rights at Columbia University. He visited Khartoum from November 1-7, 2022.