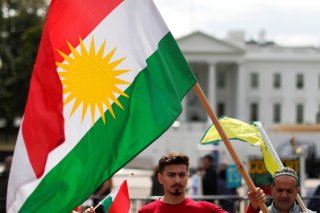 Mazlum Kobane led North and East Syria to a resounding victory over ISIS. Now, the Kurdish commander is asking his partners in that fight for support in a diplomatic feat no less ambitious: ending Turkey’s decades-long war against its armed Kurdish resistance movement, a conflict that threatens to destroy everything North and East Syria has built.

Kobane now serves as commander-in-chief of the Syrian Democratic Forces (SDF), the coalition of Kurdish, Arab, and Syriac armed groups that liberated more Syrian territory from ISIS than any other actor in the conflict. As state armies crumbled and major Syrian and Iraqi cities fell under ISIS control in 2014, he was among the leaders of a spectacular resistance.

The fighters in his command—at that time, the People’s Protection Units (YPG)—ensured safe passage to Syria for Yezidi refugees fleeing genocide in Iraq’s Sinjar province and successfully defended the besieged Syrian Kurdish border town of Kobane. That won them international support from the newly-assembled counter-ISIS Coalition, which continues to this day.

Yet the common history of North and East Syria leaves out one essential fact: fighting the jihadist group was neither the YPG’s original aim nor even its main purpose. The YPG, and later the SDF, were established to defend the people of the region and the experiment in self-determination that they began in the earliest days of the Syrian crisis.

The appearance of ISIS was an existential threat to the people and the project alike. It was also an enemy North and East Syria shared with regional and global powers. But today, the main threat to the region and its ambitious goals has a seat at the UN and backers in Western capitals.

A newly expansionist and militarist Turkey, under the leadership of far-right President Recep Tayyip Erdogan, has made the Kurdish people its first targets at home and abroad.

A failed coup attempt in July 2016 spurred a second crackdown—this time targeting not just Kurds but all opponents of Erdogan’s rule. Turkey now ranks among the top three countries in the world that have seen the greatest democratic decline over the past decade.

These compounding crises may now be catching up with Erdogan’s government. The ruling Justice and Development Party (AKP) is falling in the polls. The Turkish economy continues to deteriorate, sparking public discontent.

With Erdogan threatening a new military operation in Syria in a last-ditch effort to bolster nationalist support, the SDF, the Autonomous Administration of North and East Syria (AANES), and the two million people who live in their territory have been caught right at the center of a brewing authoritarian storm.

“The Kurdish question in Turkey does impact our areas,” Kobane says, straightforward and measured, in a rare interview from a military base on the ground in North and East Syria. “No matter where Kurds are, Kurds’ problems are all interconnected and tied to each other.”

One reason why this is true is simple geography: The Syrian-Turkish border is a recent imposition, only about a century old. The Kurdish communities torn apart and forced to become Syrians and Turks have not forgotten this fact.

“Some Kurdish cities were divided into two,” he explains. “We can see this at the border now—there’s a Kurdish city, the railway goes through the center of it, and divides it into two cities... there are tribal ties, community ties, between the Kurds in these two regions.”

And from that geographic fact follows a political one: “The Turkish state has always been an enemy of the Kurds. So when they are attacking Kurds in Turkey, they attack Kurds here too.”

“When the conflict in Turkey between the Kurds who are fighting for their rights and the Turkish state escalates, the Turkish state becomes angry. They start attacking Kurds on this side of the border,” Kobane continues, referring to the invasion and occupation of Afrin in 2018 and Ras al-Ain in 2019.

These attacks destroyed relative calm and stability in both regions. Afrin was previously untouched by the Syrian war, coming under Kurdish control in 2011. Ras al-Ain was the site of an early YPG victory over Jabhat al-Nusra, the Syrian branch of Al Qaeda, in 2013.

In both regions, the AANES’ unique participatory political structures had flourished. Multiple languages were recognized and used in education. Religious diversity was celebrated. More women served in government and defense forces than in any opposition or government-held region of the country.

But the Turkish occupation changed everything. Hundreds of thousands of people—not only Kurds, but also Yezidis, Syriacs, Armenians, and other non-Arab and non-Muslim communities that had coexisted under the AANES—have fled their homes in terror. Turkish-backed jihadist militias, some of which include former members of ISIS, now loot homes and agricultural land, kidnap and torture civilians for profit, and resort to violent infighting over their ill-gotten spoils of war. The abuse and harassment of women are so prevalent that many refuse to leave their homes out of fear.

Turkish leaders justify this catastrophe by claiming that they are targeting the PKK—the same pretext they use to target civilian Kurdish opposition at home. In one particularly revealing case, dozens of Kurdish politicians from the pro-peace People’s Democratic Party (HDP) are currently facing terrorism charges for protesting the ISIS onslaught against Syrian Kurds in 2014.

In such a political environment, Kobane says it will be “very difficult” for Turkey to have good relationships with North and East Syria. Yet at the same time, he sees one clear way out.

“If the international community pressures Turkey to announce a ceasefire, seek de-escalation, and start a peaceful process again, to go back to the negotiating table again and start a dialogue with the Kurds to resolve their problems in Turkey—I think this is one of the options available for the resolution of Turkey’s Kurdish question.”

Asked whether he believes this is something the United States, with its diplomatic relationships with both Turkey and Syrian Kurds, can do, Kobane’s view is clear.

“Of course, that’s what we believe. To be more specific, we think only the United States can resolve this problem, for some of the reasons you mentioned also—the United States works with them, and with us.”

What Kobane asks for would be a marked change in American policy towards Turkey’s Kurdish question.

The United States did little to engage in the last peace process, and even less when Erdogan plunged his country back into war. In the 1990s, when the conflict was at its height, the United States provided Turkey with record levels of arms and military aid. To this day, Turkey’s entire stock of combat aircraft is American in origin.

Turkey has used its U.S.-origin weaponry to commit grave human rights violations against Kurds and other minorities, including the razing of nearly 4,000 villages, the displacement of millions of civilians, and airstrikes on known civilian targets.

By contrast, the PKK is now best known for its key role in the fight against ISIS. Unlike Turkey, whose security forces targeted Kurdish and Armenian protestors just blocks from the White House in 2017, the group has never carried out any act of violence on U.S. soil.

Despite this, the United States still lists the PKK as a terrorist organization. In 2018, the State Department put out multi-million-dollar counterterrorism bounties for three of its leaders, in a move criticized by Kurdish communities and their allies worldwide.

There are now signs, however, that bringing an end to Turkey’s longest endless war—and reexamining the destabilizing U.S. role in prolonging it—has registered as a common-sense policy.

Congress is taking the lead, with new legislation condemning the imprisonment of pro-peace activists and politicians in Turkey and calling for peace and democracy in the country. Members working to block the sale of F-16 jets and drone parts to Turkey have cited concerns about the use of this technology against Kurdish communities across the region. The 2019 final report of the Syria Study Group said the United States should “encourage the resumption of Turkey-PKK peace talks, which hold the best possibility of leading to a détente between Turkey and the SDF.”

For their part, the PKK has stated that they would not oppose a shift in the American position on their struggle.

“We have often brought up the influence of the U.S. over the Turkish state and the role that it could play in a democratic solution to the Kurdish question,” Kurdistan Communities Union (KCK) Co-Chair Cemil Bayik said in a May interview with ANF News. “If [the U.S.] plays a role to prevent the massacre of the Kurds, why would we reject that?”