Taiwan Delivers for the Democracy Summit 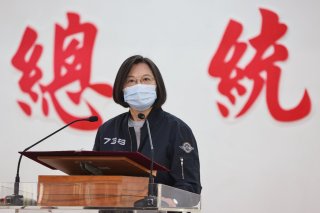 The clarion call from the Summit for Democracy that President Joe Biden convened last week was that democracy delivers and is worth defending. There are few better examples of the summit’s mantras than the island democracy of Taiwan.

Taiwan’s path toward democracy shows why it is a natural and indispensable part of this burgeoning democratic community. In addition to a bottom-up struggle by democrats and civil society within the island during martial law that pushed for greater freedom, the island’s democratization was also a top-down process initiated by certain political elites who recognized the need to democratize to shore up the government’s legitimacy.

Many nations in Asia only emerged from the shackles of authoritarianism in the 1980s and 1990s. In this context, Taiwan’s case stands out even more for the fact that Taiwan’s democracy is consolidating in a region that now faces a significant backsliding of democracy.

Taiwan’s digital minister, Audrey Tang—a minister without a portfolio—delivered the national statement and described the journey of Taiwan’s democratic development. Tang underscored that the fight for democracy at home did not stop after the island democratized. Now the government, along with the people, are fighting again to preserve its democracy in the face of China’s growing authoritarian influence.

While not inevitable, this trend perhaps could have been foreseen by the rise of authoritarian powers that ironically have benefited materially from the free and open order. The authoritarians’ growing material wealth and increasing military power have given these leaders greater confidence to assert their longstanding revanchist claims. Moreover, authoritarian leaders are utilizing sharp power to undermine democracies, casting into doubt the democratic model while reinforcing the legitimacy of its authoritarian system and those of other authoritarian leaders. The confluence of Chinese and Russian interests in undermining U.S. influence stands out as the case in point. This convergence of interests, and a shared disdain for the U.S. presence in their respective spheres of influence between Beijing and Moscow, started long before the Biden administration put forward the idea for the summit—and began in earnest in the early period of President Xi Jinping’s tenure.

While Tang and Ambassador Hsiao Bi-khim are excellent representatives of Taiwan, Taipei still had to settle for a double standard—all other states had their presidents participate. The bureaucratic snafu with the reported censoring of a map in Tang’s online presentation that color-coded areas according to their level of open civic space and so sensibly showed Taiwan in a separate color from that of China was frustrating since it could not reasonably be conceived as a violation of nuanced U.S. policy. Nevertheless, these issues do not materially diminish the substance of the occasion.

Indeed, Taipei’s inclusion is an important breakthrough that warrants closer attention for its broader implications. Foremost, it is a recognition that existing international institutions lack the capacity to address the unique challenges facing democracies now and that there is a need to broaden the coalition and focus on substantive cooperation. In this context, Taiwan—having been restricted from participating in the ministerial levels of the Community of Democracies, an affiliate of the United Nations—must be a critical and formal partner in any efforts to push back against growing authoritarianism in the international order. International institutions can no longer ignore the representatives of the duly elected leaders of a country that stands on the frontline of democracies and autocracies. Indeed, Taiwan is the democratic canary in the coal mine.

China launched a propaganda blitz against the Summit for Democracy. While it is laughable to think that any country should care why China, a totalitarian regime, is objecting to a gathering of democracies, it is perhaps no surprise that Beijing did. If Beijing is ever to truly become a world-class power, as Xi has clearly laid out in his vision for the “great rejuvenation of the Chinese nation,” it must translate its growing power on the international stage into soft power. The Chinese Communist Party needs to do so for its governance model to gain greater international appeal and recognition. The Summit for Democracy is a resounding rejection of Beijing’s and Russia’s authoritarian model, and more importantly, it is a celebration of Taiwan’s democratic model.

As Beijing squeezes Taiwan’s international space and obstructs any efforts to meaningfully include it in the international community, opening new doors for Taiwan is increasingly critical for peace and stability in the Taiwan Strait. U.S. assistant secretary of state for East Asian and Pacific Affairs, Daniel Kritenbrink, stated this clearly in his recent testimony to Congress: “Maintaining Taiwan’s international space is fundamental to preserving the cross-Strait status quo and denying the PRC the political conditions it views as being conducive for coerced unification on Beijing’s terms.”

Democracies are not perfect, and Taiwan is not an exception. Yet, just as the democracies have the inherent capacity to change course and right past wrongs, by working together, democracies can protect their shared values against the rising tide of authoritarianism.

While the first Summit for Democracy had its share of drawbacks, the Biden administration should be applauded for taking the bold step in convening the first of what the administration said will be more summits. Arguably the more important and harder process now begins: building and strengthening this coalition of democracies with concrete action.

It’s about time Taiwan had a seat at the table that it rightfully earned. Now it’s time for democracies to get to work and really deliver.

Russell Hsiao is the executive director of GTI, senior fellow at The Jamestown Foundation, and adjunct fellow at Pacific Forum.