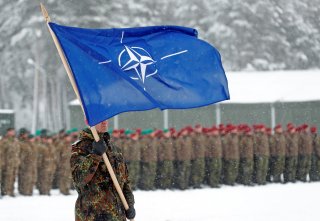 As we approach what will be a pivotal election, it seems that the issue du jour gripping the think tank establishment—after the all-pervasive question of great-power competition, is the future direction of the trans-Atlantic relationship and the health of the Euro-Atlantic community. All sorts of proposals are now circulating on both sides of the Atlantic for how to refresh and renew the Atlantic community, whether under the parameters of a second-term Donald Trump/Mike Pence or a first-term Joe Biden/Kamala Harris administration.

Many of these reports take as their intellectual starting point the supposition that Russia and China are revisionist powers, seeking to alter, amend or even, in some cases, overturn the international order that emerged under American tutelage after the Berlin Wall fell thirty-one years ago. Weakening the bonds of amity and unity among the Euro-Atlantic nations will encourage Russian revisionism, and so to stop Russian revisionism (and to prevent China from becoming a greater factor in European affairs), the Atlantic nations must rediscover a shared sense of solidarity and common action.

The strategic logic is impeccable, but what is missing from many of these analyses and proposals is the crucial question of domestic political support. There is no escaping the reality that over the last decade, as Russian (and Chinese) revisionism has increased, U.S. willingness to take on the brunt of the burden has not. Yes, per the Chicago Council’s 2019 analysis on Americans “rejecting retreat,” 78 percent of Americans concur the United States should maintain or increase its commitment to NATO, and a strong majority of Americans, across party lines, maintain that NATO is “essential” to U.S. security. Yet levels of support fall when Americans are asked about concrete steps, such as responding militarily to a hypothetical Russian incursion into the territory of a NATO ally; the Eurasia Group Foundation found a nearly even split among respondents as to whether to support or eschew military action. Americans are grappling with the issue, as the recent 2020 Munich Security Conference report summarized, that the United States is “now both less able to be a guarantor of the international order and less willing to make overproportionate contributions” to sustain it—including in the Euro-Atlantic area.

It is understandable that for countries, which border Russia, Moscow’s efforts to extend its influence would be of concern to the general public, not just the strategic elite. However, combating Russian revisionism, as a tag line, carries less emotive weight for Americans. Indeed, as Tatiana Serafin, co-host of the Carnegie Council’s podcast The Doorstep, has observed, stories dealing with the coronavirus pandemic or the fate of the Tik-Tok app rate much higher as issues of concern to Americans, especially younger generations. And within those stories, concerns about the safety of personal information or the reliability of supply chains for critical goods—such as personal protective equipment—command a good deal of attention.

What ails the Atlantic alliance is not a lack of capabilities or resources—after all, the Euro-Atlantic basin holds eight hundred million people, a combined $20 trillion in gross domestic product and several of the world’s leading military powers—but the political commitment to use them. Rejuvenating the Atlantic community requires recasting the alliance away from Lord Hastings Ismay’s classic formulation (keeping the Americans in, the Russians out and the Germans down) in favor of a positive agenda that makes the continuation of the Euro-Atlantic bond worthwhile to the average citizen—and, increasingly, to citizens who have no memory of the Cold War.

What would such a positive, post-pandemic agenda, to use the formulation of Ali Wyne, look like?

First, we should build on concerns that emerged during the coronavirus pandemic about overdependence on China for medical supplies, pharmaceuticals and protective equipment. We have a moment when we can push to ensure that all critical goods and services are sourced from supply chains that stay within the alliance or alliance partners. This should be accompanied by a commitment to harmonize the domestic legislations of the alliance members to redefine and expand national security exemptions in international trade regulations, and to expand into a “Buy NATO” provision for essential goods and services. Alliance members should also think through tax incentives and grants for necessary infrastructure construction. Politically, this could be pitched as a “Euro-Atlantic alliance generating jobs” program.

The second focus should be to recast the Atlantic community as a technological and biological sciences partnership. The coronavirus will not be the last pandemic we will face and we want to be ready for the next one. This could be described as a “Euro-Atlantic alliance keeps you healthy” approach. In other areas, partners should be working together not only on 5G technology but 6G; and for securing cyberspace for the democracies to reduce the ability of authoritarian powers from using “sharp power” to divide their societies.

Finally, as I have advocated in these pages, I cannot overemphasize the importance of shifting the focus of the NATO alliance towards the Article 3 commitments that each member undertakes for self-help in terms of defense, and to continue to encourage partners to develop and strengthen the resilience of the different flanks. Advances in defense technology allow partners to develop and enhance the porcupine defense capabilities of the alliance, to deter any aggressor—including coping with Russian probes. Defanging the “alliance of freeloaders” argument in favor of an approach that stresses “partners helping themselves.” This means moving beyond what is becoming a stale argument about 2 percent of GDP spending in favor of getting countries to spend on actual capabilities, particularly those which can enable NATO members to hold their own and aid their immediate neighbors, without always having to immediately turn to the American cavalry coming over the hill.

Vague platitudes about American leadership are no longer sufficient to sustain public support. If, however, Americans see the trans-Atlantic community as vital to their personal health, then their paychecks, even the security of their smartphones,  can build a new foundation for the Euro-Atlantic community to endure to the mid-twenty-first century.