These Soft-Power Problems Will Test the Biden Administration 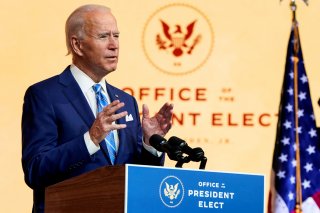 With Joe Biden’s election, and his recent appointments of an experienced, national security team, Atlanticists hope that America’s relations with Europe should return to “normal,” and that multilateral diplomacy with American leadership will flourish again between the Atlantic partners. It will be best if those hopes do not rise too high as frictions caused by fundamental changes in global power will not go away along with the Trump administration. The evolutionary process in which NATO Europe will sooner or later have to assume more of the primary responsibility for its military defense, which may somewhat slow in a Biden administration, but that process will not be stopped, much less reversed. The readjustment of U.S. military resources away from Europe toward the United States and Asia, begun by the Obama and Trump administrations, will inexorably continue.

The popular view is that Trump badly damaged relations with partners and now those relationships must be repaired so that traditional notions of American leadership in close, positive cooperation with European allies are restored. The reality, however, is more nuanced. Relations during the Trump administration with old-line NATO allies, such as France, Germany, the Benelux countries, Spain, Italy, and Scandinavian states, did deteriorate. These, in particular, were all countries that had most benefited since World War II from the U.S. military commitment to defend Western Europe against conventional invasion by the Soviet Union, now a far weakened Russia. Not surprisingly, those allies, particularly Germany, are not happy over the prospect of eventually having to assume more primary responsibility for their own defense, increasing their defense budgets to the detriment of other social and economic spending programs. They would prefer to see things stay just as they have for the last seventy-five years under U.S. military leadership.

On the other hand, newer NATO allies in Eastern Europe, particularly Poland and the Baltic states, have appreciated the support that has been shown by the Trump administration for their security in the face of resurgent Russian ambitions. That appreciation grew even stronger as those countries watched Brussels diplomats botch negotiations with Ukraine over EU associate status, stemming from demands over-improving Ukraine’s governance. Those negotiating issues set off a chain of destabilizing events in Ukraine’s domestic politics that eventually led to a government collapse and ultimately opened the door to Russia’s annexation of Crimea. It also left a dismembered country saddled with a frozen civil war in eastern Donbass that has cost so far over thirteen thousand lives. Ukraine has paid a high price for its EU association membership. The West has also paid a stiff price, notably a sharp deterioration in relations with Russia. Brussels’s aggressive use of soft power left the United States holding the military bag, leaving it to supply the bulk of military assistance and leadership to Ukraine to help counter Russian fomented strife in Donbass. Thanks to the EU’s clumsy handling of associate status with Ukraine, overall relations between Washington, European allies and Moscow have been vastly complicated with sanctions and a return to a Cold-War-era-type atmosphere. Trump administration policies cannot be primarily blamed for any of this, and it has been American leadership in the NATO alliance that has been forced to lead the response.

The EU mishandling of Ukraine's associate status is not the only example of its destabilizing diplomacy in the region. When Recep Erdogan was originally elected prime minister in 2003, his first priority was to gain Turkey’s admission into the European Union as a full member.  He declared that “Turkey [was] very much ready to be part of the European Union family.”  Such a move would not only have benefitted Turkey, it would have been a major step forward in Western cohesion, joining a country of over eighty-four million, NATO’s second-largest military power, and the world’s thirteenth largest economy (purchasing power parity), with the core of Western Europe. That combination would also have served huge symbolic value, showing that a Muslim culture could be embraced into full economic and strategic military partnership with a secular/Christian West. None of this was to be. Notwithstanding an array of liberalizing steps taken by Istanbul to try to address EU demands including women’s rights and capital punishment, negotiations dragged on for years. The last two nails in the coffin were Merkel’s 2017 flat declaration that Turkey should not be an EU member, and then Macron’s insulting assertion in 2018 that at best Turkey might be allowed to gain at most some kind of second-tier partnership, not full membership. The rest is history. Erdogan and Turkey have turned their back on the West and embarked on a centrifugal, rollerball foreign policy that has created a myriad of problems for the West ranging from Syria and Libya, to the Russian S-400 missile system, to promotion of the Muslim Brotherhood, to Nagorno Karabakh, to dangerous clashes with Greece over Cyrus and energy exploration rights in the Mediterranean Sea, including even confrontations between Turkish and French warships.

The opportunity now exists for the Biden administration to work constructively with European allies to temper the EU’s use of soft power so that its initiatives are less threatening and disruptive to stability in the region. For starters, Washington should stress that Brussels’ differences with Hungary and Poland should not be allowed to spin out of control to the point where the governance of either country is fundamentally destabilized, similar to what happened to Ukraine over EU associate membership.

The more overarching issue, however, calling for U.S. multilateral leadership in a Biden administration, should be Turkey. The incoming administration must prioritize a patient, long term, diplomatic initiative to repair relations between Western allies and Ankara.   The United States obviously has its own issues with Erdogan’s autocracy, but these pale in comparison to the longstanding challenges between Ankara and its secular/Christian Western European neighbors, going back historically to the Ottoman era. The new administration should resist the temptation to increase pressures on Ankara over the S-400 dispute, human rights, rule of law, and Iran sanctions-busting by Turkish state lender Halkbank. Brussels needs to be encouraged to pick up the pieces and reassess how it can build a roadmap that can realistically lead to Turkey’s full EU membership. Critical to this puzzle will be the need to give head of state-level attention to the differences between Greece and Turkey. The issues of Cyprus and Mediterranean exploration rights have been allowed to fester dangerously for decades.  Without satisfactory progress on these problems, there is no path forward for the true integration of Turkey into the West. Reducing conflict between Greece and Turkey should take as much or more immediate precedence for NATO allies and the EU as issues in the Middle East and Asia.

The real challenges for the United States with its Western European allies have been overshadowed over the last four years by the controversy over NATO burden-sharing. That problem will inevitably take care of itself with European allies forced by new realities to pick up the slack. The tougher issue that the Atlantic partners must tackle with more focus is diplomatic. Washington must help its allies rein in their repeated use of soft power in ways that have caused destabilization in the region and adversely impacted relations between the United States and Russia. Western Europe needs better diplomacy in its own backyard, bringing Turkey into the fold, and no longer creating messes for the United States to clean up.