The Transatlantic Alliance and the Western Balkans 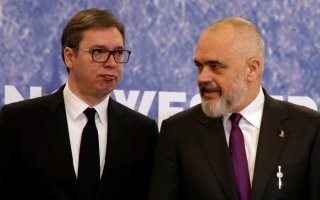 The “return” of the United States in Europe is good news for the transatlantic alliance; it’s the strongest foundation on which the West’s security and prosperity are built. “The transatlantic alliance is at an inflection point” President Joe Biden pointed out in his speech at the virtual Munich Security Conference last month, as challenges that America faces today are more difficult to handle in a new era of great power competition. The West has a unique opportunity to open a new chapter in strengthening transatlantic relations, as the new U.S. administration offers an opportunity to work together to overcome current challenges and frictions and thus renew the transatlantic alliance. In a confidence-strengthening exercise on both sides of the Atlantic, consultations, coordination and cooperation will take priority in addressing common security challenges.

Urgent issues on the table range from joint transatlantic approaches to China and Russia, common tactics on re-engagement to Iran, and responses to climate change, NATO, and the coronavirus pandemic. In this framework, bilateral relations between Germany and the United States have the potential to define the future character and substance of transatlantic relations. In this framework, several German representatives from academia, military, and politics, in their paper More Ambition, Please developed five core demands for a new agreement between Germany and the United States “with the aim to reinforce the role of the United States in Europe, and to develop a new transatlantic set of tasks. The new consensus focuses on five core policy areas: China, NATO, the coronavirus pandemic, climate, technology, and trade. A sixth should be added to this list: the Western Balkans, to reach “the goal of Europe whole and free and at peace.” The Western Balkans is part of the other five core areas, of course, but its unique role (of Europe, but not yet in Europe) singles it out for attention.

That said, the Western Balkans is not in great shape, as it is suffering the worst economic downturn in the last twenty years. The coronavirus pandemic has taken a terrible toll on the physical, social, and economic health of the region. Economic divergence with Western Europe is increasing. Ten years ago, the average income per capita of the region made up 15 percent of the EU average per capita. Today, makes up only 14 percent, with $6,000 per capita average income. While governments have adopted emergency measures and economic support packages, the scale of challenges has certainly exceeded their national capacities to respond. Countries of the region are critically disadvantaged compared to the EU countries in their ability to deal with the converging economic and economic crises, as they lack funds and capabilities. This situation will impact the pace of economic, democratic, and social reforms that are critical for EU integration.

The current EU integration process has stalled. The pandemic has made things worse, highlighting the shortcomings of EU policy towards the Western Balkans, as well as the latter’s economic and political divergence from EU standards, as the crisis of 2020 has favored strongmen who draw increasingly on Chinese and Russian models of authoritarian capitalism. But once again, rather than seeing the Western Balkan candidacies for EU membership as yet another in a long list of EU problems, the transatlantic community can instead harness Western Balkan interests and experience to address its own future. By doing so, it will give new and badly needed relevance to the attractiveness of EU membership in a new era, and by extension, that of a strengthened West.

European integration and transatlantic cooperation are linked inextricably—two sides of the same coin. This is also the center of gravity for the future of the Western Balkans. In the aftermath of World War II, the presence and engagement of the United States as a European power, ensured peace and stability in the European continent and created the conditions for European integration and prosperity. In the 1990s, the role of the United States was indispensable for bringing peace in the Balkans after the bloody dissolution of former Yugoslavia. Today, the “open questions in the Balkans” and the Euro-Atlantic integration of the region can only be achieved through a transatlantic approach.

Biden’s long relationship with the Balkans should ease the path to restoring transatlanticism and rebooting joint efforts in the Euro-Atlantic integration of the region. The new transatlantic approach towards the Western Balkans should focus on core democratic values. Considering the many challenges the United States and the EU are facing in the new era of great-power competition, success in the Western Balkans is not only a very achievable task, but also a Litmus test for the future of European integration. A transatlantic joint strategy, with German-American relations as the backbone of the alliance, should focus on key areas: Euro-Atlantic integration of the region, resolution of bilateral issues, resilience, China, and economic development and energy security.

Let’s look at a couple of examples. Now that Europe and America are on talking terms again, it should be easy (institutionally at least) to come up with a common agenda for the pressing problem of Kosovo and Serbia. The mechanism—an EU lead under its experienced negotiator Miroslav Lajcak, with close cooperation with American diplomacy—can and must get beyond the scattered approach of recent years. That means expanding Lajcak’s scope to include not only knotty bilateral issues between the two countries, but outlining for Belgrade and Pristina how their cooperation in public health, education and partnership in high tech, digital governance, and green technology can bring them into the conversation of the rest of the Atlantic world. To do so will require attention to such issues as corruption and rule of law, but not just because the west preaches this to the aspirants, but because without tackling these problems Kosovo and Serbia won’t be realistic partners in the new post-coronavirus economy and political development.

A variation on this theme applies to Bosnia as well. For decades now, Europeans and Americans have talked about how the structures established at Dayton don’t meet the needs of the people there. Rather than continuing the current management-of-crisis, this might be an area where Germany and America could take the lead, perhaps again with an empowered German envoy (former Federal Minister and Member of the German Bundestag Christian Schmidt) working closely with transatlantic support. What are Germany and America talking about? Trade, digital issues, economic reform—offer to bring the Bosnian leadership into these global debates, and if the structure of the Bosnian leadership isn’t capable of responding, then look for those who are, whether in universities, civil society, or local political leaders.

China: Make the Western Balkans Allies in the Transatlantic Effort

Another priority topic for Europe and America is China. The rise of China represents significant challenges for the transatlantic community, and as such is very high in the priorities list to define a joint transatlantic strategy to focus on economic, security, and technology.

In the Western Balkans, Chinese increased activities through trade, investment, debt for equity, but also through educational and media activities have solidified its position in the region, including support for its regional policy objectives, silence (or defense) of human-right abuses, international legal violations, and mercantilist economic behaviors. Thus any coordinated EU-U.S. approach towards China should include the Western Balkans, including the transatlantic partnership on screening of FDI that should be extended beyond the EU, to allow for better optics on China’s investment and influence strategy through its BRI and “17+1” platforms.

We should not continue to see the Western Balkans as a prize that one side or the other will win.  Rather, the huge advantage of a common western approach is that we can bring the Western Balkans into our evolving strategy on China. In other words, treat the Western Balkan countries as partners in this and they may just respond by acting as partners. A stronger transatlantic engagement is needed to build resilience in the region towards Chinese influence and counter the propaganda narratives, especially to support the democratic dimension. The bottom line: make the Western Balkans allies, not objects, in this effort.