Transatlantic Awakening: Why Europe and China are Creating a Comprehensive Agreement on Investment 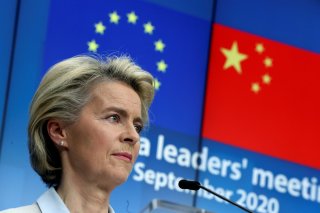 After seven years of negotiations and thirty-five rounds of talks, you might say that the new EU-China Comprehensive Agreement on Investment (CAI) looks to be the best gift the EU could give to China or more accurately speaking the Chinese Communist Party (CCP).

The agreement is about market access for European companies to the Chinese market. The key goals and objectives focused on the liberalization of investment, elimination of quantitative restrictions, rules against the forced transfer of technology, new obligations about the behavior of Chinese State-Owned Enterprises (SOEs), better transparency rules for subsidies, and other commitments related to sustainable development. In principle, if everything goes as planned, then what is there not to like?

In Europe, the CAI deal would appear as a pragmatic step forward in regulating the shifting paradigm in investment relations with China and promoting reciprocity when it comes to market access. This reciprocity is critical for Europe. In less than a decade, Chinese foreign direct investment (FDI) in the EU increased approximately fifty times (from less than USD $840 million in 2008 to USD $42 billion in 2016). This increase in investments has been significant and has strong implications when it comes to China’s economic and geopolitical influence in Europe. According to data from MERICS, the stock of cumulative Chinese FDI in Europe is USD $195 billion (including the UK). But, if contracts implemented from Chinese companies in Europe are added, the numbers are definitely higher: reaching USD 298 billion, based on data of the American Enterprise Institute. According to the EU Commission, EU cumulative investment in China amounts to USD $170 billion.

Perhaps the most important question not being discussed is the ideological foundations of parties to the deal, the EU and China. Two parties with opposing ideologies. Hopeful vs. unapologetic. To belong to the EU, countries must pursue a values ideology that agrees to values supporting human dignity, human rights, freedom, democracy, equality, and rule of law. The CCP is a one-party totalitarian government that rules China. According to President Xi Jinping’s report at the 19th National Congress of the Communist Party of China, as reported by China Daily in 2017, “We have strengthened Party leadership over ideological work and explored new ground in advancing Party related theories. The importance of Marxism as a guiding ideology is better appreciated. Socialism with Chinese characteristics and the Chinese Dream have been embraced by our people.” In this regard, the CAI is in reality a deal between the EU and the CCP.  Semantics some would say, but this is an important point that must factor into every decision.

Another way to look at the CAI deal would be to ask why did Beijing decided to make these concessions to the EU? Could it be out of fear of losing investment opportunities in Europe, especially in the economically devastated buyers’ market resulting from the coronavirus pandemic? A “déjà vu” of 2009, but this time much bigger. The investment screening mechanisms now in place across the EU have put regulators in a much better position to increase scrutiny and intervene in foreign takeovers to protect European assets and technology (framework for screening of FDI became fully operational in October 2020). Add to it the unfavorable opinion about China that has soared over the past year resulting from the CCP’s handling of the coronavirus pandemic. In Germany alone, 78% of the responses show that the public has lost faith in Xi. Also, the pandemic demonstrated the EU’s vulnerability to disruption of supply chains and the strategic dependence on Chinese exports. With western countries now considering “near shoring” opportunities for their companies, can Beijing really afford having western companies leave China?

Equally important, is not losing sight of the fact that western investment will provide the CCP with much needed technical knowhow in a range of industries it still needs to develop in order to fully reach its strategic objectives of “technological autonomy” in line with its goal of “Made in China 2025.” Building up technological competencies and reducing dependence on foreign technology is at the heart of Chinese self-reliance industrial strategies and policies and its mercantilist expansion abroad.

In spite of the fact that Chinese equity investment in Europe has decreased (dropping to USD $14 billion in 2019, likely a result of better investment screening mechanisms and tighter administrative controls in Europe and financial constraints in China), Chinese R&D collaboration with companies, academic institutions, but also governments in the EU have significantly increased.

While the aim of the CAI is to level the playing field, increase transparency, and prevent the forced transfer of technology, it surely will be only a modest step in promoting reciprocity. If we have learned anything from the past, is that Beijing has always demonstrated resistance when it comes to meeting or implementing the standards and regulations of free market economies.

If ratified, then the CAI will be a de facto recognition that it is acceptable to conduct a wide range of business activity with a totalitarian communist government that has proven itself capable of violating human rights with exacting precision and no apology. The CCP has embraced a surveillance policy of near-total control of its population using sophisticated surveillance systems, internet monitoring and influence capabilities that violate the most basic and fundamental human rights. From heavy-handed responses to demonstrators in Hong Kong, the incarceration of Uyghurs for political indoctrination, to prosecuting medical professionals voicing concerns about the coronavirus pandemic. The CCP’s policy promoting its nine-dash line aimed at extending its territorial claim to much of the South China Sea and its border issues with India are clear examples of its provocative and bellicose attitude.

There are simply too many examples of the CCP’s flaunting the rules-based international order to ignore or explain away. More importantly, these transgressions have occurred while the CAI was being negotiated. This begs the question of whether the EU proponents of the CAI are being Naïve and mirror imaging EU values onto the CCP with the hope that they will come around. Essentially, this rewards the CCP and encourages its bad behavior. Furthermore, even in the language of the European Commission’s press reports celebrating and explaining the deal, the words are carefully phrased almost suggesting a subliminal recognition that holding China accountable is less than a certainty.

What could be the unintended consequences of a ratified CAI? First, it is not a done deal yet. Although it was agreed to in principle, the text has not yet been finalized. It will still need to undergo a legal review before it is submitted for approval to the EU Council. If approved by the EU Council (heads of governments of 27 member states), then the earliest it could be ratified by the European Parliament would be in 2022. The timing of the CAI’s endorsement on the eve of the new U.S. administration taking office is curious. Perhaps it will serve as a push factor for the new U.S. administration to promote the importance of a transatlantic alternative to the CAI.  The timing is right for governments on both sides of the Atlantic to focus on repairing cracks in the transatlantic relationship and making the transatlantic trade the model for the global community—one based on rule of law.

Joseph Vann is a professor of national security studies at the George C. Marshall European Center for Security Studies.

The views presented are those of the speaker (or author) and do not necessarily represent the views of U.S. Defense Department or its Components.