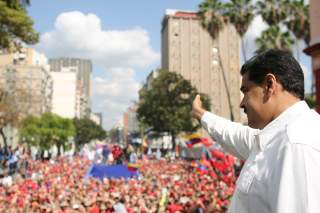 WASHINGTON — The Trump administration doubled down Monday on its remarkably hawkish line on Venezuela.

Secretary of State of Mike Pompeo gathered reporters for an unusual, unscheduled early evening press conference at State headquarters in Foggy Bottom, and just before midnight, ordered the evacuation of the American embassy in Caracas.

“The U.S. will withdraw all remaining personnel from [U.S. embassy Venezuela] this week,” Pompeo said. “This decision reflects the deteriorating situation in [Venezuela] as well as the conclusion that the presence of U.S. diplomatic staff at the embassy has become a constraint on U.S. policy.”

Speaking to reporters Monday, the secretary lambasted the regime of Nicolas Maduro, but above all, emphasized the centrality of Cuba, Washington’s bete noire in the region. Experts on the region frequently cast Venezuela as a client state of Havana. Pompeo on Monday sought to turn the narrative of an overreaching United States on its head.

In analysis that drew eyebrows, Pompeo argued that nations, namely China and Russia, who support the Venezuelan regime are, “by their very nature,” engaging in the type of foreign interventionism they accuse the United States of initiating.

“Cuba is the true imperialist power in Venezuela,” the secretary said.  “The Cuban government . . . provides political cover for Maduro and his henchman . . . It’s Cuba that has trained Venezuelan secret police in torture tactics, domestic spying techniques, and mechanisms of repression.”

Pompeo is frequently contrasted with his predecessor, Rex W. Tillerson. Yet on Venezuela, Pompeo has practiced continuity. Tillerson, when it came to Latin America, was a get-tough oilman who even got in hot water for defending the Monroe Doctrine, the centuries-old policy of U.S. carte blanche in the Americas.

Like all of his other predecessors, Pompeo has been more careful than the rest of his administration about going political. Yet longtime observers of the seventh floor couldn’t help but notice the nation’s chief diplomat in lock-step with a president who is incessantly raising the spectre of socialism in his re-election bid. Pompeo battered the “communists in Havana” and assailed the “overwavering solidarity” of Washington’s socialist enemies in the region.

Said Pompeo: “So, when there’s no electricity, thank the marvels of modern, Cuban-led engineering. When there’s no water, thank the excellent hydrologists from Cuba. When there’s no food, thank the Cuban communist overlords.” Longtime Latin America hawk Frank Gaffney, who has met personally with the president in recent months and remains a dominant fixture in hard-right circles, on Tuesday blasted “the communist dictator still illegitimately clinging to power.”

Puffery aside, Venezuela risks the dark. “We are witnessing in real time a slow motion national suicide,” Eric Farnsworth, a former Clinton administration official and expert on the region at AS/COA, told me. “U.S. pulling out remaining embassy personnel by end of the week. It's a prudential step to protect them. Chaos is building . . . Bad news.”

For realists, American military intervention should be off the table, and Trump administration declarations to the contrary make most uneasy—as do comparisons by the Senate’s de facto point man on the country, Marco Rubio, of the U.S. effort in Venezuela to the ruinous campaign in Libya he also championed, earlier this decade. A former senior administration official told me that Rubio has been pushing for a knives-out approach on Caracas since Trump’s inauguration in 2017. That same official cast Pompeo, then CIA director, as more pragmatic, calling him “excellent.”

The administration, in some respects, sees the matter at hand as bigger than Havana. The national-security strategy painstakingly constructed by former National Security Advisor H. R. McMaster has been thrown in the trash by his successor John Bolton, who favors a leaner approach. Yet, here too, there is underemphasized continuity between principals in this most convulsive of administrations. McMaster hammered the concept of a return of great-power competition. Pompeo, still allied with Bolton, Monday warned Moscow and Beijing, vis-a-vis Venezuela, to mind their own business.

And the administration apparatus as a whole (including former White House chief strategist Steve Bannon) is attempting a pivot to Bolsonaro’s Brasilia. Pompeo lieutenant Paula Dobriansky wrote in an op-ed that was published in the Miami Herald on Tuesday that the United States and Brazil, which under Jair Bolsonaro is inveterately anti-Maduro, form a formidable axis of the region’s two largest democracies: “This growing U.S.-Brazil partnership disproves the canard that President Trump is an alliance-phobic isolationist and presents considerable opportunities for America.”

Still, raw politics can’t be avoided. Trump once effectively joined with his primary opponent Rand Paul in openness to detente in the region, even on Cuba; he all but reversed himself by the general election, the primacy of Florida to Republican power all too clear. A once scattershot administration strategy is increasingly coming into view. The vice president, Mike Pence, emphasized to a group of Venezuelan exiles in Florida last month that “all options” are, indeed, on the table.