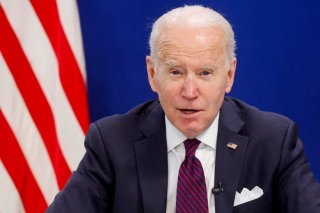 White House spokesman Jen Psaki began her briefing on January 20 with “happy anniversary.” Of the many people thinking to themselves, “Do we really have three more years of this?” chief among them were those who worry about America’s position in a dangerous world.

Today, Russia dominates world news at the expense of feckless Joe Biden, but the full story of the last year is one of far more comprehensive national decline on the world stage.

Topping the list is Biden’s stunning loss in Afghanistan, which was the biggest blow to American power since at least the fall of Saigon to communists in 1975. However, the year also included Biden and his aides repeatedly begging the Islamist regime that runs Iran for a nuclear deal. Like the last such deal in the Obama-Biden administration, a new one is certain to enshrine rather than abolish the mullah’s nuclear weapons program. Biden is already letting Iran get away with selling oil to China.

Biden took other steps to make Islamism great again. Early in his first year, he gave money and political encouragement to the Palestinians, whose Iranian-backed Hamas overlords launched a missile war on Israel. Biden hasn’t provided for restocking the weapons Israel expended to defend itself.

Biden browbeat Saudi Arabia and other Arabian Gulf states to be nicer to Iranian-backed Houthi insurgents in Yemen, who just responded with a deadly missile attack on oil facilities in the United Arab Emirates.

Most dangerously, Biden has been weak on China. He said we would come to Taiwan’s defense if China attacked that nation. But if Beijing believed that promise, it would have made a much bigger stink. Instead, China looks at the U.S. military, unable to win a war but with leaders who want to explore “white rage,” sees the U.S. Navy and other branches of the armed services shrinking in the Western Pacific, and happily bides its time.

When asked by a reporter if he would press the question of whether China created Covid-19, Biden just grinned, implying that addressing Beijing’s culpability in the deaths of nearly 900,000 Americans was beneath him and an impediment to discussing things like climate change.

China’s friends who run North Korea are back to testing ballistic missiles, the best of which can hit the United States.

Contrast this situation under former President Donald Trump, especially by his last year before Biden. Trump had put tariffs on about half of the items we import from China and enacted strict export controls on the most sophisticated semiconductors made with U.S. technology—a fundamental shift from the previous decades in which our elite thought communist-run China would become a partner.

North Korea was at the negotiating table and had stopped testing nuclear weapons and long-range missiles.

While the improved relations with Moscow that Trump desired were made impossible by the hysteria surrounding the Russia collusion hoax, Russian president Vladimir Putin undertook none of the provocations against Ukraine that have occurred under weak Biden.

Trump accomplished all of this without acceding to the national security establishment’s desire to get into more wars in the Middle East or elsewhere.

At the heart of these accomplishments was better leadership at the end of the Trump administration, especially Robert O’Brien in the role of national security advisor and Mike Pompeo as secretary of state.

O’Brien was Trump’s fourth advisor, following a string of disappointing choices. He took a view that was unfortunately rare in the Trump administration: that his job was to implement the president’s views and agenda, not stymie them in order to calm the foreign policy establishment.

This achievement was all the more remarkable given that O’Brien inherited a national security staff at the White House saturated with bureaucrats promoting their own agenda. Examples included Fiona Hill, the British-accented Europe expert who opposed Trump’s attempts to deal with Putin and later testified against him in the sham impeachment; and Alexander Vindman, the Ukrainian-born army officer who outrageously said that policy was established by the “inter-agency process” rather than set by the president whom we elect.

Pompeo faced similar challenges at the State Department. He also outmaneuvered bureaucrats working against the president by ignoring them and pulling important issues directly in the secretary’s suite.

Neither men, nor Trump, ever had the benefit of a cooperative Pentagon. Trump’s first secretary of defense, Jim Mattis, was an enthusiast for the fighting in Middle East backwaters that Trump wanted to curtail. His second, Mike Esper, was dominated by generals who opposed Trump politically. Trump’s White House had to work around the Pentagon to get the results the president wanted.

Unfortunately, under Biden, the foreign policy establishment is back in charge. The results are now obvious after just one year. We have been humiliated and are suffering the consequences of American decline—with three full years left to go. Let’s hope the next administration looks more like the last year of Trump than the first year of Biden.

Christian Whiton was a State Department senior advisor in the Trump and Bush administrations. He is a senior fellow at the Center for the National Interest and edits “Super Macro” on Substack.