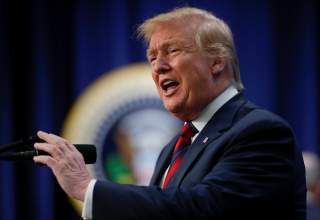 Yemen is a small and impoverished outpost on the Arabian peninsula.

Its relative geopolitical insignificance inspires a series of tu quoque arguments surrounding the Saudi-U.S. coalition’s activities in the country. If the country matters so little, why should foreign policy realists expend significant political capital—as they have—trying to stop said activities? But by the same token, if Yemen matters so little, why should Washington allow itself to be led by the nose by its junior partners in Riyadh and Abu Dhabi?

The reality is that Yemen is a metapolitical battle, which was renewed again Tuesday night by President Donald Trump’s veto of a congressional rebuke of his administration. The White House’s position was inherited from the Obama team. Chances are good—with a United States mired in debt, and populist forces galore unleashed in recent elections—that a debate (primacy vs. restraint) will define a generation of foreign policy thinking, as Stephen Wertheim pointed out recently in the New York Times. Yemen is part of that story.

As neoconservative reporter Eli Lake wrote earlier this month: “When combined with the growing number of Democratic presidential candidates pledging to rejoin the 2015 Iran nuclear deal, this vote shows a party ready to embrace neutrality in the conflict for the future of the Middle East.” The horror.

Candidate Trump once all but pledged such neutrality—inspiring terror in the Republican establishment. But such heterodox suggestions thrilled an anti-establishment political coalition that seized power in 2016. Candidate Trump loved Wikileaks; President Trump doesn’t know who Julian Assange is. Such broad-minded pivots, in moderation, may be prudent—but not at the risk of a political coalition.

Successive White Houses have pledged to deeply reform America’s war on terror; it's the follow-through that’s underwhelmed. With Bernie Sanders and a resurgent left running strong in the Democratic primary, the president risks having the antiwar vote, such as it is, stolen out from underneath him.

Until recently, the president was more able to play coy on his actual political priorities—but the strong-arming of Assange combined with Tuesday’s rare veto have some asking what exactly they voted for.

“KAG!”—a former White House official told me he has taken to referring to “Keep America Great,” the 2020 unofficial campaign slogan, sarcastically. A former senior administration official tells me Wednesday that a coup de grace could be coming: Nikki Haley, a neoconservative, on the 2020 ticket in place of the already-conventional Mike Pence.

For some realists, it’s paradise lost. “The Saudi-UAE campaign harms U.S. interests,” Benjamin H. Friedman of Defense Priorities said. “It prolongs and exacerbates a civil war that has increased Al-Qaeda in the Arabian Peninsula’s presence there” and “needlessly breeds new enemies and resentment toward the U.S.”

Strategic neutrality is a fine course: “U.S. interests in the Middle East are limited,” says Friedman. The goal should be: “Preventing the emergence of a regional hegemon, preventing large-scale disruptions to the global oil supply, and eliminating transnational terrorists who directly threaten the United States.”

The administration-consulting Security Studies Group (SSG)—which also claims the realist mantle, and rejects neoconservatism—thinks the United States needs to take sides. The outfit smells a media conspiracy, which is the kill switch of political issues for the Trump White House, and media allies like Breitbart News—which has, interestingly, largely opposed U.S. involvement in Yemen. But says SSG’s David Reaboi: “Muslim states that embrace political Islam and anti-Americanism like Turkey, Qatar and Iran, are seen as relatively sympathetic warriors against a western global hegemon.”

As the administration remains persistently understaffed, plucky outfits like SSG, and the more experienced Foundation for the Defense of Democracies (FDD) and Center for Security Policy (CSP) remain ex officio parts of Trump’s political apparatus.

A presidency has never been more ripe for capture.