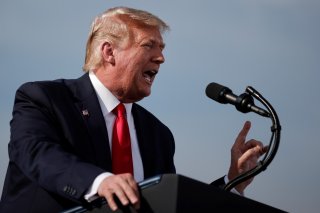 Editor's Note: The following is an excerpt from The Eleventh Hour in 2020 America: How America's Foreign Policy Got Jacked Up - And How The Next Administration Can Fix It.

Look, there’s just no good way to say this: American foreign policy for more than two decades has been an unqualified failure. If substantive changes are not made—soon—in how we engage with the world, we risk suffering catastrophic loss. The good news, however, is that there is yet time to turn things around with sober, rational, and realistic policies.

Some may consider the claim the U.S. could suffer a catastrophic loss an alarmist view. Sure, some will agree, Washington could do a better job in some areas, but it’s a stretch to suggest the risk of failure is that high. It is precisely because such views are so prevalent that I wrote the book The Eleventh Hour in 2020 America: how America’s foreign policy got jacked up – and how the next Administration can fix it: the stakes really are that high, and the risk of failure is that real.

Whether Donald Trump wins a second term on November 3 or Joe Biden is voted into office, it will be crucial that the Administration make a clean break with past failures. Trump can’t continue with the status quo of the past four years and Biden can’t merely reprise his eight years under Obama.

America needs a new foreign policy construct that is aligned with a realistic and sober recognition of the world as it is, warts and all, and uses the full range of American power—in intelligent and creative ways—to produce outcomes beneficial to our country. If, however, the next Administration continues the establishment foreign policy status quo that has drifted unchecked for decades, we risk international obsolescence at best—or we’ll fumble our way into an entirely unnecessary and pointless war at worst.

My great fear, however, is that next month’s winner won’t make those necessary changes.

What I expect is that the inertia of Washington’s foreign policy status quo of the past few decades will continue to squash any attempt at reform; that we’ll continue to pay a steep price for avoidable failure, that we’ll continue most or all of our on-going forever-wars, and that eventually, we’ll stumble into a real war that severely gashes our ability to defend the country and damages the foundation of our ability to prosper.

Fortunately, nothing bad has happened yet. There is still time. As of this writing, we are not at war with China, Russia, North Korea, or Iran. We have the strongest military and an unequaled ability to project power globally. The dollar is still the dominant global currency and we still have the most powerful economy on the planet.

From this position of strength and power, we can change course on our foreign policy, slowly work off the negative consequences, and over time build an even stronger foundation for prosperity and national security. It remains to be seen whether we’ll seize this opportunity or condemn ourselves to plunging blindly forward into an avoidable disaster. This essay is written to expose how our foreign policy has failed the country, why it has bombed, and explains how it can be successful well into the future.

American foreign policy since Sept. 11, 2001, has devolved to the point that the face of U.S. diplomacy to the world is a series of forever-wars in which no combat deployments ever end; coercive measures against even major nuclear powers range from muscular military demonstrations to routine use of economic sanctions, even against our own allies.

Our current policies not only fail in their intended purposes, but they deteriorate our security and complicate our ability to prosper. Perhaps even worse, it has had a disastrous effect on the very American service men and women who are charged to execute these policies: thousands of them have been killed, tens of thousands wounded, and hundreds of thousands have suffered traumatic brain injuries and post-traumatic stress disorder. North of $6 trillion of our tax dollars have been utterly wasted.

Our military-first approach to global affairs started on September 11, 2001. The initial wound we suffered on that day proved to be only the tip of the iceberg and set us on a downward path that continues our decline to this day.

Americans were understandably afraid of the unknown and shadowy world of terrorists at that time and the government leapt in to provide security and stability. Bush responded to the attacks in a forceful way that punished those he said were guilty of the attacks in Afghanistan. His initial orders were limited in scope and militarily attainable. By the summer of 2002, Al-Qaeda had been deeply wounded and dispersed into impotent cells around the Middle East.

Bush should have then acknowledged the objectives had been attained and withdrawn our military force, transitioning our Afghan mission to a State Department-led humanitarian and diplomatic enterprise. Instead, he refused to take the win and expanded the conflict in ways that still haunt us today.

Since Bush refused to withdraw from Afghanistan in 2002, every Administration since has tried various strategies, varying troop levels from as low as 8,600 to as many as 100,000 yet never succeeded in winning the war or ending the conflict. In October we began the twentieth consecutive year of war in Afghanistan where we remain, mired in a forever-war with no identifiable objective and no means of ever winning.

Moreover, continuing several bad precedents Bush had set, Obama committed U.S. combat or support troops to operations in Syria, Yemen, and Libya. None of the Obama uses of force accomplished their stated objectives: our troops are still in Syria, the Yemen civil war continues without resolution, and nine years after intervention, Libya remains a festering wound of a civil war.

To his credit, Trump hasn’t started any new wars and has reduced the number of troops fighting abroad. To stop the slide in 2021, however, the winner of November’s election must do more than slow the descent but must make a clean break with the past and embark on a new course.

A careful, comprehensive, and unemotional analysis of the full range of America’s soft and hard power, combined with an equally accurate assessment of any given opponent or geographical region, persuasively argues that there are vastly superior and cost-effective ways to the current foreign policy methods that will keep our country safe and prosperous. The best remedy to the bankrupt concept of fear-based policies is the elevation of a new approach which I call constructive realism.

In its most basic form, constructive realism sees the world as it is and creates policies designed to maximize our government’s ability to keep American citizens safe while simultaneously building the best relations possible with the entire range of states and groups around the world. It does not view the world in simple black-and-white, good-and-evil terms—which don’t exist outside of movie scripts in any case—but bases its policies on an unemotional assessment of how we may best safeguard our interests.

Constructive realism seeks to affirm and build on any good elements a given country may have while encouraging them to modify behavior that is wrong or counterproductive to our interests and values. It will first seek the good of our country and treaty partners by elevating the role of diplomacy in solving problems. Yet it also recognizes there are Hitler-like types in the world that at some point may not respond to reasonable diplomatic overtures and force will have to be used.

That is why the best deterrence our country can have is to maintain an Armed Forces capable of invincible national defense, able to repulse any attack and exact such a terrible price on any foe who dares attack us that none will likely ever try—and in the unexpected case some do try, we will crush them and win.

Trump in either a second term or Joe Biden in a first have the opportunity to make America stronger and more prosperous. The next president can accomplish this by doing the hard work of diplomacy, acknowledging the messy world as it genuinely is, and embracing a mindset that seeks the maximum possible good for our country.

Daniel L. Davis is a former Lt. Col. in the U.S. Army who deployed into combat zones four times, winning the Bronze Star Medal for Valor in Desert Storm (1991) and a Bronze Star Medal for service in Afghanistan (2011). He is the author of “The Eleventh Hour in 2020 America.” Follow him @DanielLDavis1.