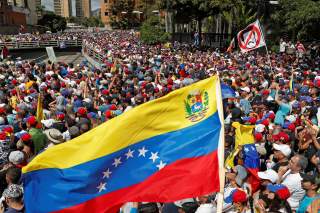 “Today I am officially recognizing the President of the Venezuelan National Assembly, Juan Guaido, as the Interim President of Venezuela,” President Donald Trump said in a statement emailed to reporters Wednesday afternoon.

Gaudio swiftly accepted the mantle thrust upon him by Washington, and addressed supporters in Caracas, taking an oath of office in front of a cheering crowd. The spectacle occurred as the Venezuelan capital was mobbed with protesters opposed to Maduro’s government.

Many Latin American policy hands in Washington, accustomed to taking a backseat to the Middle East and Eurasia, were surprised at the audaciousness of the Trump move.

“Today marks an inflection point in efforts to restore democracy in Venezuela,” Eric Farnsworth, an alumnus of the Clinton administration and vice president at the Council of Americas says. “It's a bold move by the Trump administration, with bipartisan congressional backing.” Such sentiment is consistent with that fact that this is no unilateral action from the president. As of Wednesday afternoon, Canada has joined the call as well—as have regional allies Peru, Brazil, Argentina, Colombia, Paraguay, Ecuador, Costa Rica and Chile. Trump has quietly cultivated allies in the hemisphere since early in his presidency, including dining with the leaders of most of Venezuela’s neighbors the night before his first, fiery address to the U.N. General Assembly.

Farnsworth argued that this maneuver “will need to be followed up with further actions to ensure that momentum toward a democratic restoration continues and does not flag.” A senior official of a major U.S. energy corporation told me he was expecting the United States to sanction Venezuelan crude. The administration has hammered Caracas with sanctions but avoided targeting the petrostate’s chief export.

In Washington, the announcement isn’t wholly surprising. The State Department, under both Mike Pompeo and Rex Tillerson, has pursued a quietly hawkish line on the country. The maneuver has just failed to capture most headlines as the administration also got tough with Iran, China and North Korea.

Secretary Pompeo called for the country’s suspension from the key regional group, the Organization for American States, in the summer, although he stopped short of calling for regime change. Pompeo noted that Maduro “has demonstrated unmistakable bad faith and exhausted options for dialogue under current conditions.” Tillerson, before his ouster, cheered the nineteenth-century Monroe Doctrine that fiats broad U.S. authority in the region. Said Tillerson, the retired oilman, in comments that got him in hot water, the policy was “clearly… a success” and “as relevant today as it was the day it was written.” Doubtless, another factor in the administration’s confidence is the ascension of Brazil’s Jair Bolsonaro, the “Trump of the Tropics.” Guglielmo Picchi, a senior Italian politician and a top ally of populist star Matteo Salvini, was in Washington earlier this month arguing that Italy, under their governance, will seek to become America’s top ally in Europe. Bolsonaro, a trenchant Maduro critic, is angling for a similar role in Latin America.

But Vice President Mike Pence took the matter to the next level Tuesday night, teasing Wednesday’s announcement. “We are with you,” Pence wrote on Twitter in both Spanish and English. “We stand with you, and we will stay with you until Democracy is restored and you reclaim your birthright of Libertad.”

But Wednesday’s development is a coup for one White House influencer, in particular: Senator Marco Rubio. Former White House chief strategist Steve Bannon told me no one was more forceful in advocating for what would become the administration’s hard line.

Rubio messaged in unison with the White House Wednesday, with his official Twitter live streaming Guadio’s remarks. “61 years ago [Venezuela] overthrew a dictatorship. Today, just like January 23, 1958, is a historic day for Venezuelans marching against [Maduro’s] narco-terrorist tyranny and raising their voice in support” of Guadio, Rubio said Wednesday.

Rubio, and his allies in Congress, form the basis of a power center that presses the administration for a fiercer line on not only Venezuela, but Cuba. Their efforts have been decidedly successful, as a sizeable amount of the Obama-era detente has been rolled back. This cohort sees Venezuela as a puppet of Havana.

The importance of the Cuban emigre community in Florida, of course, cannot be overstated in a Republican capture of the White House. Trump, like his now-ally Rand Paul, was originally warmer to the Obama administration’s efforts to make nice with Havana. Paul has still publicly stood by his heterodox position, but Trump largely flipped.

A fiercer line on Caracas divides even some realists. Some, such as Tucker Carlson, have called attention to China’s investment in the country and in Latin America. Unlike the Middle East, this is America’s backyard and involves the United States’ only true geopolitical pier, the thinking goes. China’s investiture in the country includes a recent, much-needed $5 billion credit line and the exportation of the technology behind its deeply controversial social credit system. China watchers note, however, that Beijing has cooled on the flailing Maduro and his late-2018 visit to the country garnered almost no attention.

But other realists fret that an all-but-regime-change policy could be a tragic mistake, another misguided adventure. “It makes sense for the United States to recognize National Assembly President Juan Guaido as Venezuela’s leader—provided his claim to the title is constitutionally-grounded,” Benjamin H. Friedman at Defense Priorities told me. He added, “The United States must be wary of getting pulled into regime change efforts in Venezuela. Using military force to overthrow Maduro would be foolish, not just because of the risks it entails, but because the accusation of being a tool of U.S. imperialism could damage the prospects of real democracy there.”