Understanding the Ukraine War Through the Lens of World War II 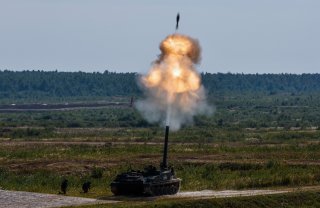 History is not destiny, yet the past can teach us what is or is not possible in the future. Despite drones, cruise missiles, precision weapons, and special operations forces, the Russo-Ukrainian War remains defined by the five main constraints of war: equipment, training, doctrine, morale, and terrain. Much has been said about the first four, yet not as much about the ground over which the fighting is conducted. Geography molds wars like it channels rivers, enabling action and imposing limitations.

Vladimir Putin’s war is a steppe war. Since the Mongol’s Eurasian empire of the thirteenth and fourteenth centuries, steppe wars have consisted of little-constrained seesaw maneuvers where the first encounter rarely decided the outcome. Instead, repeated waves of attack and counterattack see momentum swing between the two sides until one of them losses the ability and/or desire to fight.

Barely eight months old, the current war is already showing this characteristic, with the initiative shifting. The military operations conducted in eastern Ukraine from 1941-43, provide context to understand how this process could drag on. There were no fewer than twelve operations over those two years, highlighting the unstable equilibrium of steppe wars, and providing some understanding of what might come next in Ukraine if the logic of previous steppe wars continues to apply. Unfortunately, a regional or global escalation is still possible and could be caused by a number of factors: political crisis in Russia, economic collapse of Ukraine, or worst of all, the foolish employment of nuclear weapons. However, for now, we can only speculate about what we know. Below is a summary of World War II German and Soviet operations in Ukraine that could elucidate both steppe warfare in the modern context and the combatants’ current predicaments.

The territory of eastern Ukraine over which Moscow and Kyiv are currently fighting was some of the most hotly contested of World War II. From the summer of 1941 through the summer of 1943, vicious and decisive battles seesawed here in swings of hundreds of miles. Villages and towns frequently changed hands, Kharkiv alone did so four times. Ukraine’s second city represented one of the industrial powerhouses of the western Soviet Union, and the region possessed significant amounts of agricultural and mineral resources valued by both sides. Soviets and Germans coveted the coal mines and steel mills in the Donets River basin (Donbas), in particular the industrial city of Stalino (now Donetsk). Both armies sent large, mechanized formations over the landscape, followed by huge marching armies that caused untold destruction in the same locales we now read about every day.

The twelve operations during those two years highlight the pendulum-like movement of operations in steppe geography. Except for the final two Red Army offensives in late 1943, each maneuver ended with only a partial, temporary advantage, usually followed by predictable counterattacks. The first ten maneuvers confronted numerous problems common to all armies in all wars: the enemy, poor plans, weak logistics, exhaustion, overstretch, weather, and of course, terrain, just to name a few. World War II dictators Adolf Hitler and Josef Stalin learned these lessons the hard way when the other grabbed the initiative from him. Of all people on the contemporary scene, Presidents Vladimir Putin, Volodymyr Zelenskyy, and their staffs should know these lessons and be alert to the risks of not respecting them. In other words, attacks that stop should expect a counterattack. Victory today can lead to loss tomorrow. Given this, Ukraine’s recent successes cannot be considered complete victories, much less decisive steps toward a final victory, until the Russians cast their vote.

But let history tell us what clashes by modern armies on this terrain looked like a couple of generations ago. What follows is a chronological list of World War II operations in eastern Ukraine. On the map, blue represents German advances and red is Soviet, while the name and dates are also provided (numbers in parentheses refer to corresponding map in my Atlas of the Eastern Front, 1941-1945, Osprey, 2016). Recall too, that, unlike today, at the time Russia and Ukraine were both republics in the same country, the USSR, so we can correctly refer to Russian and Soviet troops as Ukraine’s liberators. 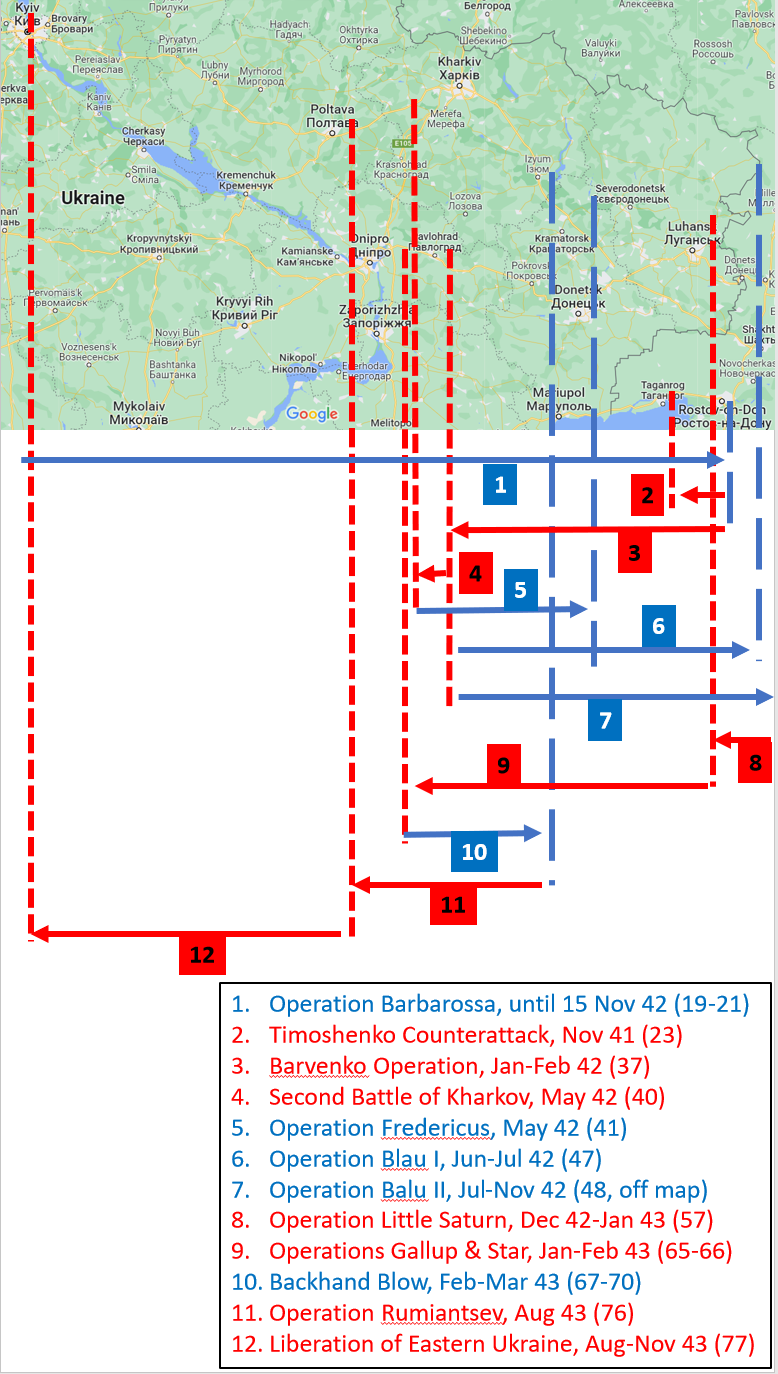 1. On June 22, 1941, Hitler launched Operation Barbarossa, history’s largest invasion with approximately 3 million men plus many thousands of artillery, tanks, and aircraft on each side. The Red Army defended as best it could, but by November, the German Army Group South overran most of Ukraine, captured Rostov, and crossed the Don River. At that point, Hitler’s eastern army ran out of steam, far short of strategic victory.

2. As part of the general Soviet counteroffensives all along the front, in mid-November the Red Army ejected the Germans from Rostov. They pushed the invaders back more than forty miles, reached the Mius River, and the gates of Taganrog before they halted.

3. Sensing overall German weakness in the wake of Soviet autumn counterattacks at Moscow and from the Baltic to the Black Seas, Stalin maintained pressure. During the winter of 1942, his troops moved on either side of Izium and advanced over fifty miles toward Dnepropetrovsk.

4. During the spring of 1942, the Soviets tried to capitalize on their momentum from January-February. In mid-May, they attacked north and east of Kharkiv, but made limited progress (what is known as the Second Battle of Kharkiv did not actually touch the city). To the south, they enjoyed more success, expanded their Izium salient, and pushed an additional thirty miles into German lines. Unbeknownst to them, however, the Red Army had stumbled right into the mass of Wehrmacht forces organizing for their 1942 general offensives.

5. The time and place of the Soviet attacks could hardly have been worse. Army Group South responded quickly with two heavily mechanized armies and considerable air support that had been preparing to attack the Caucasus Mountains and Stalingrad. While debates over what to do next raged in the Kremlin, German Operation Fredericus reached Izium and cut off four Soviet armies. A quarter million Red Army POWs marched off to captivity at a cost of 20,000 German casualties and many weeks delay to the imminent offensive.

6. By late June, the Wehrmacht was ready for Operation Blau, its 1942 offensive to regain the operational momentum, seize the Caucasus oil fields, and cut off the USSR from Allied assistance staged through Iran. On June 28, Phase I began north and east of Kharkov, to maintain the ruse that Hitler’s principal objective was Moscow before it stalled at the Russian city of Voronezh.

7. Phase II of Blau began on July 9, southeast of Kharkiv. In less than two days, the Germans captured Kupansk, Lisichansk, Starobelsk, and Severodonesk, while Luhansk fell a day later. Each of these cities is central to the Russo-Ukrainian War today. The Wehrmacht now occupied all of the country and headed for Stalingrad plus points south and east.

9. Sensing a German collapse on the heels of the disaster at Stalingrad and the Caucasus, from January 29 through mid-February, the Red Army launched Operation Gallup toward Dnepropetrovsk, and in February, Operation Star toward Kharkiv and beyond. The two attacks liberated significant portions of eastern Ukraine. The first attack recorded advances of nearly 140 miles, coming within thirty miles of the Dnieper River. The second liberated Kharkiv, and continued westward an additional 100 miles.

10. The Soviet assaults far exceeded both their ability to plan and logistical support, however. Army Group South carefully husbanded its mechanized forces and counterattacked against the overextended Soviets. Its Backhand Blow maneuver rolled up the salient’s southern flank and recaptured Lozovaya, Barvenko, Izium, and Slavyansk. The Germans then continued north to retake Kharkiv and Achtyrka, and reached Belgorod in Russia (a main base of Putin’s February 2022 invasion).

11. Unlike 1941 and 1942, Hitler’s July 1943 offensive Operation Zitadelle failed to make any meaningful progress. The Red Army took a couple of weeks to recover, then on August 3 launched Operation Rumiantsev. In three weeks they regained all the territory lost in Phase II of the Backhand Blow the previous winter. Rumiantsev also saw the fifth and final Battle of Kharkiv.

12. Starting the last week of August, five Soviet “fronts” (army groups) liberated all of Ukraine east of the Dnieper River. They completely overwhelmed the exhausted Germans who, in the open and flat steppe terrain, could not organize a coherent defense. By the end of September, except for the Wehrmacht enclave in Crimea, the frontline ran from Gomel (Russia) to Kyiv to Dnepropetrovsk to Zaporozhe to Melitopol, all cities in the news today.

In the early weeks of Putin’s war, Russian forces covered more than seventy miles from Belarus to the Kyiv suburbs, and from occupied Crimea to beyond Kherson. They also closed the greater than 225-mile gap along the Sea of Azov coast between Crimea and the Russian frontier. During September, the Ukrainians covered similar seventy-mile distances between Kharkiv and Izium and the Russian border to the northeast. Therefore, today it is still entirely possible to cover World War II-worthy distances.