The U.S. Economy Is Rebounding: Will Trump’s Reelection Prospects Do The Same? 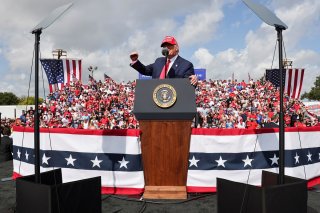 Whether recent good news on the economy will affect the election result remains an open question, but there can be no doubt that the third quarter’s GDP tells the story of a powerful growth rebound. The Commerce Department reports that the economy’s gross domestic product during the third quarter grew at a stupendous 33.1 percent annual rate. This is surely a record and verifies a host of other statistical evidence that the economy has been roaring back from its depressed state of last spring. Through the last few months, various sources have reported rapid gains in retail sales, employment, construction, and business purchases of capital goods and technology. Now this comprehensive review of the entire economy confirms the picture. More, it points to a powerful growth momentum going into the last quarter of the year and 2021, a momentum that will benefit whoever emerges as the victor in the presidential race.

Even this powerful surge has not yet recovered the ground lost last spring. As the still high 7.9 percent rate of unemployment reveals, the economy has a way to go yet to recapture the levels of prosperity it enjoyed as it entered 2020. Real economic activity remains some 3.5 percent below where it closed out 2019 and some 2.9 percent below year-ago levels. Since the pace of the rebound will undoubtedly slow, even if an effective vaccine becomes available, it will likely take until late 2021 or 2022 to return to the high rates of employment, profitability, and rapid wage growth that characterized the closing months of 2019 and this year’s opening months. And if a virus surge evokes renewed lockdowns, that recovery will take longer still.

Other than this unavoidable reality, the figures to date offer nothing but encouragement about the country’s return to economic health. Critically, the growth is organic with little artificial support from Washington. The CARES Act from last spring, after helping the economy through the worst effects of the lockdowns and quarantines, has run its course. With Congress’ recent failure to pass renewed federal support, none of this growth owes its existence to money flows from Washington. Indeed, the recent GDP figures show that real government spending actually fell at a 4.5 percent annual rate during the third quarter, mostly at the federal level but also at state and local levels. To be sure, these GDP figures focus mostly on government purchases and the salaries of government employees and not on transfers for such programs as health and unemployment insurance. And surely, continued high rates of unemployment suggest that money continues to flow for such programs, but with the numbers of unemployed down by over 10 million from April’s highs, even this flow of government money cannot have been much of a factor in the third quarter’s economic advance.

The private economy, where one must look for economic staying power, shows nothing but strides toward renewed strength. Consumer spending rose in real terms 40.7 percent at an annual rate in the third quarter. That is surely a record. Residential construction activity outdid even this remarkable showing. It rose at a 59.3 percent annual rate over its level in the second quarter. Business spending on new productive equipment and structures rose in the third quarter at a 20.3 percent annual rate, a less remarkable showing than the household sector but nonetheless historically strong. It is somewhat disappointing that spending on new technologies, what the Commerce Department refers to as “intellectual property products,” actually fell at a 1.0 percent annual rate during this most recent quarter. That would be more concerning were it not that this kind of spending suffered less in the lockdowns than other aspects of general business spending. It is also encouraging that a sharp rise in business orders for new equipment and systems points to future expansions in productive facilities.

The foreign trade sector might introduce some confusion into this picture of recovery. Because imports outpaced exports, the U.S. trade balance slid further into deficit during the summer quarter. Were it not for this deterioration, overall growth would have been some 3 percentage points higher than it was. But behind this summary figure, the trade situation looks a lot less troubling. U.S. exports of goods and services actually surged strongly during the quarter, rising at a 59.7 percent annual rate. What happened to the balance of trade is that the powerful surge in consumer spending sucked in imports at an even faster rate. They rose at a 91.1 percent annual rate. This imbalance will moderate as the rate of consumer spending growth slows, as it inevitably will from this first blush of re-opening, and the pace of imports growth slows with it, likely disproportionately so. Then the trade balance will tip back toward balance, though for a host of reasons that have no place in a review like this, not to an even balance for the foreseeable future.

Barring a virus spike that brings on new lockdowns and quarantines, this third quarter picture of the economy should dominate the next few quarters. The growth pace will slow, as the initial exuberance of re-opening wanes and pent-up demands from last spring are satisfied. The annualized rate of real growth should slip back into single digits by the first quarter but remain high by historic standards into next spring and maybe summer. After that, the economy’s trajectory will depend on what Washington does about trade, for instance, or taxes, immigration and spending priorities, all the economic questions that pre-date coronavirus and have not disappeared.

Milton Ezrati is a contributing editor at The National Interest, an affiliate of the Center for the Study of Human Capital at the University at Buffalo (SUNY), and chief economist for Vested, the New York based communications firm. His latest book is Thirty Tomorrows: The Next Three Decades of Globalization, Demographics, and How We Will Live.