The U.S. Military's Nuclear Arsenal Is What Keeps Us Safe 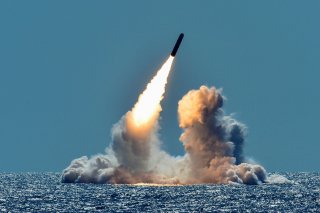 For the past decade, two administrations and twelve annual sessions of Congress have agreed on a strong bipartisan basis to both modernize the nation’s nuclear arsenal and simultaneously continue building such weapons in an arms control framework.

In a nation dangerously divided about public policy, such a consensus is a national treasure the country should not lightly give up.

That is not to say there are not some controversial measures in the nuclear modernization of America’s deterrent. But, in fact, key elements have been widely supported with nearly 98 percent of the funding requested for this past decade being approved by Congress.

Leaders of both parties have sought to have arms control—the New START Treaty of 2010 between the United States and Russia now extended for five years—the framework within which the United States maintains its triad of nuclear forces, but with the former designed to accommodate our deterrent requirements, not the other way around.

To that end, 92 percent of all United States nuclear forces are governed by the New START rules.

But the New START rules assume the United States will build twelve Columbia-class submarines that never have to be re-fueled, saving billions over their expected sixty-year lifetime.

And acquire at least one hundred B-21 stealth bombers which give the United States an extraordinary coverage of adversary targets we need to hold at risk, while at the same time New START special counting rules do nothing to impinge on the conventional bomber force.

As well as buying the Ground-Based Strategic Deterrent, a new intercontinental ballistic missile (ICBM), replacing Minuteman, and which will last through 2075, with a remarkable modular capability that will cut maintenance costs in some areas by fully 70 percent, while meeting the upgraded Strategic Command deterrent requirements. One key House vote in 2019 was a resounding 266–166 in favor of proceeding with the ICBM modernization plan.

Not only are the three triad platforms being fully funded by Congress, but the two additional long poles in the tent have also secured very widespread support. In a world of growing cyber concerns, the nuclear forces need a new nuclear command and control network, known as NC3, and this applies to all elements of the triad whether legacy or modernized systems.

In addition, the National Nuclear Security Administration (NNSA) has been working to stabilize the warhead life extension and nuclear fuel and pit production infrastructure that the country had let deteriorate. Over the past decade, a number of remarkable public servant leaders at NNSA have moved much of the NNSA business to being on schedule and within budget, a not insignificant accomplishment.

Since the United States first fielded a nuclear triad of ICBMs, submarine-launched ballistic missiles (SLBMs), and strategic bombers, twelve administrations, six Republican and six Democrat, have resisted calls to eliminate the ICBM force, cut the number of submarines significantly, or eliminate the cruise missile for the U.S. bomber force.

Policy ideas such as “no first use” have also been rejected, as well as the de-alerting of U.S. missiles, both land- and sea-launched.

Since 1962, when the first Minuteman missile went on alert on the day President John F. Kennedy revealed there were Russian nuclear-armed missiles in Cuba, U.S. missiles have been on alert for some seventy million minutes, and not once has the president ever ordered the missiles to be launched.

As Kennedy revealed after the Cuban missile crisis, “Minuteman was my ace in the hole” that prevented Armageddon.

One particularly important factor in the current decade-long progress in nuclear modernization has been relatively strong and consistent funding. Despite the Budget Control Act, the nuclear forces modernization programs secured strong funding, which allowed marked progress in upgrading the U.S. deterrent.

A critical element in Congressional support was also the consensus understanding that over the long haul, fully 50 percent of America’s nuclear costs are simply to maintain nuclear legacy system that are variously going to be between forty-two to sixty years old prior to replacement. Congress recognizes that the current U.S. nuclear deterrent force is the oldest since the dawn of the nuclear age some seventy-five years ago.

And as such further realizes that the prompt attention to modernization will save considerable resources, as sustainment costs of the to be replaced legacy systems continue to escalate.

This is why America’s defense leaders, especially the vice chairman of the joint chiefs, have urged Congress to move modernization forward at “the speed of relevance.”

Critical to the success so far is that despite some differences, the four previous Nuclear Posture Reviews, or NPRs, going back to just after the end of the Soviet empire, contained widespread agreement on the path forward.

Finally, consensus also exists in how Congress views the threat. It is understood Russia has modernized 92 percent of its long-range nuclear forces while fully 55 percent of its overall nuclear arsenal comes under no formal arms control limits.

And that China while shielding its nuclear forces from scrutiny, is now projected to at least double and probably redouble its nuclear arsenal in the next five years.

Consensus and agreement are hard to achieve in Washington. But with respect to America’s nuclear deterrent, which is the nation’s most important priority and the bedrock upon which all U.S. security rests, a bipartisan agreement remains and must continue to guide us through the next decades.

Peter Huessy is president of Geo-Strategic Analysis of Potomac, Maryland, a guest instructor at the U.S. Naval Academy on nuclear deterrence history, and the creator of a nearly four-decade-long series of Hill nuclear deterrent breakfast seminars.