U.S. Troops are Leaving Afghanistan In a Lurch 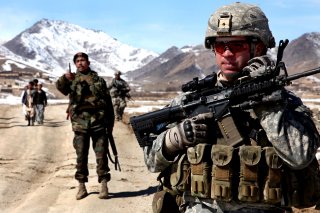 “Beware of entrance to a quarrel, but being in, Bear’t that the opposed may beware of thee.” These words were spoken by Polonius more than four hundred years ago in Shakespeare’s Hamlet, bidding his son, Laertes, farewell.

Notwithstanding this eternal wisdom, President Joe Biden withdraws U.S. troops from Afghanistan after twenty years of commitment. The goal was to uproot Al Qaeda using Afghanistan as a hub. It is and was debatable whether the United States should have dared to move in, but opting for this step, it should certainly never dare to pull out.

Now, wherever they are, terrorists bide their time until the United States loses its persistence. Their tactic is anchored in Chinese strategist Sun Tzu (around 500 BC) teaching to avoid confrontation until a favorable balance exists.

Allies, opponents and potential enemies watch policies, interpreting and scrutinizing them, conceptualizing postures to forming an image of U.S. strategy and tactic. They try to figure out what the withdrawal means for other questions of interest for them, however unrelated they may look on paper.

Not a man to waste time, on July 12, 2021, Russian president Vladimir Putin announced “I am becoming more and more convinced of this: Kyiv simply does not need Donbas.” How will Russia react to a U.S. response if trouble in the Donbas region flares up again? Which lessons will China draw concerning Taiwan and the South China Sea? And will the withdrawal help to get Iran back to negotiate on its nuclear program?

Regrettably, withdrawing also fits into a pattern of morally reprehensible change in policies.

In 1965, the United States sent troops into Vietnam, eventually reaching five hundred thousand, to fight the Viet Cong and the People’s Army of Vietnam (North Vietnam). Ten years later, from the rooftop of the American embassy in Saigon, boarding a helicopter, the last man left the country. Military supplies to the Army of the Republic of Vietnam (South Vietnam), which was trained and equipped to fight a U.S.-style war, stopped, leaving it helpless.

Millions of South Vietnamese, expecting promises to be kept, were left behind to face the North Vietnamese—and if everybody knew quite well what it would mean. Roughly 1.6 million South Vietnamese people were resettled. Either as boat refugees or under the orderly departure program. At least three hundred thousand of them were sent to education camps.

Chances are that something akin to that will happen to the large number of Afghans who believe the United States could be trusted. They will be left to the mercy of the Taliban, surely conducive to human misery.

Twenty-six countries prodded by the U.S. sent troops to Afghanistan. All these countries will feel that they have been let down and implicitly engulfed in U.S. domestic policies, which was not what they signed up to. More than twenty-three thousand U.S. servicemen have been killed or injured and that is only for the U.S. A number of soldiers are known to suffer depression or similar distress taking a normal life away from them and their families. The brunt of the burden was shouldered by the Afghans of whom sixty thousand servicemen and 120,000 civilians are estimated to have been killed. They fought because they wanted another societal system, now likely to be out of sight with no hope for their future. The awkward and painful question to be answered is: Was it worthwhile, to no purpose?

China has been accused of genocide and human rights abuse of Uyghurs and minority groups in Xinjiang. The accusations are rejected by China, but the use of re-education camps over some time conceded. The crackdown in Xinjiang is posited as necessary to prevent terrorism and root out Islamist extremism.

There is a link between Afghanistan and Xinjiang. Allegedly Muslim terrorists in Xinjiang get help from groups using Afghan territory as a hub. There is also a paradox. The U.S. has found it perfectly acceptable to send troops to Afghanistan to combat Muslim terrorism, but reject out of hand Chinese explanations that it is taking on the same enemy inside its own territory.

It is unlikely that Afghanistan will be left as a hub for terrorists. China, Russia, India, Pakistan, Iran—countries that loathe Taliban—plus other nation-states in Central Asia will take steps to prevent this from occurring. They will not send troops but get leverage through other means.

Afghanistan’s neighbors may contemplate driving a wedge between the Taliban and Al Qaeda.   The Taliban wants to roll back Afghan society to pre-2001 and doesn’t owe Al Qaeda anything. Sponsoring terrorism, not among its political objectives, will jeopardize that goal. The quid pro quo for suppressing Al Qaeda might be a pledge of noninterference in its domestic affairs.