Was China the Winner of Taiwan’s Elections? 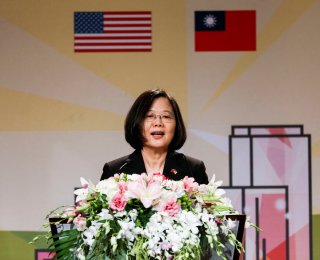 In Taiwan’s November 26 local elections, the China-friendly Kuomintang (KMT) party won thirteen out of the twenty-one open city and county seats. The ruling Democratic Progressive Party (DPP) and President Tsai Ing-wen ran anti-China campaigns, but DPP candidates only won five seats. Immediately after the election, China’s Taiwan Affairs Office claimed that the election result “reflected that people in Taiwan want peace,” adding that Beijing will keep working to “promote peaceful relations and to oppose Taiwan independence,” according to Reuters. Meanwhile, some scholars and commentators in the United States have argued that the election results were a slap in the face to President Joe Biden over his pro-Taiwan stance.

Did the Taiwanese people really embrace China in the recent election? Several factors suggest that the Taiwanese have not switched sides from the United States to China.

First, the KMT received fewer votes than it did in the most recent local election, which was held in 2018. KMT candidates received 6.1 million votes and fifteen seats in 2018, but it only picked up 5.7 million votes and thirteen seats in 2022. Meanwhile, the DPP won 5 million votes and six seats in 2018, compared to 4.8 million votes and five seats in 2022. The KMT’s superstar candidates, including former dictator Chiang Kai-shek’s great-grandson, Wayne Chiang, received fewer votes than they did in 2018. Moreover, all KMT and DPP mayors running for reelection won, and all flipped seats were open. If the total number of KMT votes reflects the percentage of Taiwanese voters who have embraced China, it is clear that little has changed from 2018. In other words, the Taiwanese people are not becoming more China-friendly.

Second, there are two different interpretations of the “ineffectiveness” of the DPP and Tsai’s anti-China campaign. Some hypothesize that the Taiwanese people suddenly became China-friendly. However, this is not the case. Indeed, academic polls indicate that the majority of Taiwanese citizens only identify as Taiwanese and treasure the status quo.

The second hypothesis is more plausible: because anti-China sentiment has become the consensus in Taiwan, parties and candidates cannot differentiate themselves on this issue. Hence, the DPP’s anti-China campaign was not a politically salient issue for voters. For example, the KMT’s mayoral candidate for Taipei City, Wayne Chiang, claimed he would devote his life to defending Taiwan from a Chinese invasion. Ching-Ying Huang, the speaker of the Taiwan People’s Party (TPP), another opposition party, argued that “Anti-China exists in every Taiwanese people’s DNA,” even though she hadn’t espoused anti-China rhetoric until recently.

As all major parties in Taiwan did not oppose, and even publicly supported, the anti-China narrative during the campaign, it is not surprising that the DPP and Tsai failed to use this narrative to their electoral advantage. There was a similar phenomenon in the 2020 U.S. presidential election; because both Democrats and Republicans held negative attitudes toward China, the China issue was not a decisive factor for voters.

In fact, Tsai’s anti-China campaign was ineffective not because the Taiwanese people rejected it but because it has been overwhelmingly accepted. As a result, the Taiwanese people paid more attention to their country’s economic performance and social issues, such as candidates’ integrity and housing prices, and withdrew their support from the DPP due to their dissatisfaction with the party’s handling of these issues. For instance, the DPP lost votes in districts with higher education levels and population density, as the problem of rising housing prices became one of the most salient issues for urban voters. In contrast, the DPP gained votes in the southern districts, which should have been impacted by China’s economic sanctions. This indicates that playing the China card is ineffective, and other economic and domestic factors, such as pandemic policy, explain the DPP’s loss.

Hence, the DPP lost the support of moderate voters not because of China but due to its own domestic performance and other organizational issues, such as its nomination strategies. Immediately after the election, many Taiwanese citizens and politicians, including many KMT and TPP politicians and supporters, changed their social media profile pictures to blank photos to support the “white paper revolution” against China’s “zero-Covid” policy. Clearly, supporting this movement can hardly be seen as an embrace of China. Indeed, the Taiwanese people withdrew their support from the DPP for the same reason they support the ongoing protests in China: they believe in democracy, dignity, and sovereignty. In other words, voters turned against the DPP due to their dissatisfaction with the party’s domestic performance, not because of their love for China.

Nevertheless, the China factor will be relevant in Taiwan’s upcoming 2024 presidential election. The cross-strait relationship has been the dominant issue in all Taiwanese presidential elections since 1996, as the president manages this key issue. Even though most Taiwanese citizens acknowledge the economic benefits they gain from China, they are also worried about China’s economic coercion and the risk of losing their dignity and sovereignty. If the United States and Taiwan can speed up the negotiation of a bilateral trade agreement, future economic pressure from China will be largely mitigated. For now, the China factor will remain the most important consideration for Taiwanese voters in presidential elections.

Austin Horng-En Wang is an assistant professor of political science at the University of Nevada, Las Vegas. Find him on Twitter @wearytolove.

Fang-Yu Chen is an assistant professor of political science at Soochow University, Taiwan. Find him on Twitter @FangYu_80168.

Charles K. S. Wu is an assistant professor of political science at the University of South Alabama. Find him on Twitter @kuanshengtwn.