The West Can’t Afford to Be Dependent on Petrostates 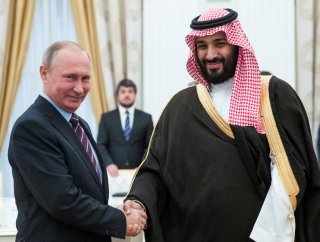 Europe sweats under record-high summer temperatures as it simultaneously braces for the cold months coming. Last week, the Russian gas company Gazprom announced a drastic cut—down to about 20 percent of capacity—in the flow of gas through the pipeline which supplies Germany. This could make for a catastrophic winter. One recent report grimly explored how Germans might revert to heating their homes with wood.

In the United States, the situation is less severe, though Americans certainly feel the pinch of high energy prices. Polls show voters worry about the rising cost of living, and especially driving costs. So, President Joe Biden reversed his campaign position to make Saudi Arabia a “pariah" and gave the kingdom’s crown prince a fist-bump and a boost to his status.

How did we end up here?

In 1938, an American company in Saudi Arabia struck oil. As the world industrialized, the kingdom swiftly became a leading oil producer and remains central to the world energy market today, with extraordinary leverage over its security provider, the United States. But Riyadh is not alone in its ability to bend the will of powerful states. Every “superproducer,” including Russia, is able to exert pressure and resist otherwise strong countries.

Most American and European consumers don’t wish to bankroll autocratic regimes, but their leaders often leave them no choice. Policy decisions in Washington and European capitals have led to this moment. But it’s not just the lack of political will and ingenuity to pivot to more renewable sources of energy: though loath to admit it, Washington has a baffling “need to be needed” by oil-rich countries. And by brokering power struggles in the Persian Gulf, where it otherwise has no compelling interest, Washington gains an excuse to play “globocop.”

America’s relationship with Saudi Arabia, like Europe’s with Russia, resembles a sad cycle of codependency. In personal relationships, codependency occurs when one prioritizes another’s needs above one’s own, losing a sense of independence in the process. This dynamic also occurs when strong countries with admirable democratic traditions enable bullying petrostates, often subordinating their own interests to those of their badly behaved partners.

Washington is complicit in its own exploitation when it sells billions of dollars in military hardware to Saudi Arabia in exchange for dubious promises of reliable access to cheap energy. America’s “allies and client states take the money and use their [American-made] weapons in pursuit of policies inimical to US interests,” the Carnegie Endowment’s Andrew Miller and Richard Sokolsky write, calling Saudi Arabia a “poster child of this phenomenon.” Something similar could be said of Europe and Russia.

One solution, easier said than done in a globally interconnected energy market, is to stop enabling capricious petrostates. A bold step would be for the United States and Europe to announce a plan to wean themselves off of the oil from petrostates who defy their vital interests. Washington should lead the plan to replace Russian energy in the winter.

Given the looming threat of climate change, every country has an interest in ending its reliance on fossil fuels but, in a classic problem of collective action, every country also experiences this threat differently. Droughts in Syria may not seem connected to fires in Spain; erosion in Japan hardly seems to impact flooding in Kentucky.

This is why the United States and Europe should focus foremost on achieving energy independence and disentangle themselves from the values and interests of Riyadh and Moscow.

Some argue that “oil-for-security” deals help advance Western interests. Increased Gulf production could bring down prices at the pump (and boost Biden's party’s prospects in the midterm elections). European imports of Russian oil and gas will create the goodwill of a customer relationship. So, it is argued that we should hold our nose on hypocrisy about liberal values or the wars in Yemen or Ukraine.

But the underlying assumptions here are that America’s Middle East policy needs partnership with Saudi Arabia and that Europeans need Russia to cooperate rather than capitulate. Both are flimsy. Some analysts even suggest prices might go up if Saudi Arabia were to pump more, as investors could get jittery about the lack of spare capacity.

Asking Gulf states to pump more oil as a supposedly quick fix for high gas prices leads Washington to give up far too much for uncertain and temporary results. Over decades, it has caused the United States to become the suppliant guarantor of Gulf security—a role ill-suited for a professed values-first foreign policy. Doing so commits resources to a region the United States needs to draw down from, and it subsumes our national interests under the agendas of autocrats.

Washington could use its leverage as a security guarantor or threaten abandonment instead of pressuring leaders through the Gulf, hat in hand. Berlin can continue to hike its defense spending in response to Russia’s war, but even it admits it has no good alternative to Russian energy.

Western political leaders will have to get relentlessly creative to accelerate the transition to renewable—and independent—sources of energy. They are unlikely to curb the demand for energy, but they could work toward a future where the developed democracies are not pushed around by weaker but resource-rich autocrats. The promotion of U.S. interests—which include the viability and longevity of the planet—demands an end to this codependency.

Mark Hannah is a senior fellow at the Eurasia Group Foundation, and host of its None Of The Above podcast.