What Does Biden Really Want in Ukraine? 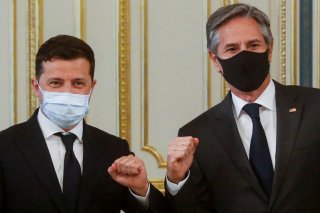 In Kiev, Secretary of State Antony Blinken pledged continued U.S. assistance to Ukraine while stressing the need for further domestic reforms. But, despite its symbolic significance, the visit did little to dispel the cloud of strategic ambiguity looming over the U.S.-Ukraine relationship.

Antony Blinken met with Ukraine’s President Volodymyr Zelensky and other top Ukrainian officials while visiting Kiev earlier this week. “...As the president told you when you spoke, and as I reiterated today, we are committed to Ukraine’s independence, to its sovereignty, to its territorial integrity,” said Blinken during a joint press conference with Zelensky.

Ukrainian observers were hoping that Blinken’s visit would bring with it an ironclad American security guarantee, following years of mixed policy signals and political controversies under the Trump administration. In particular, the Zelensky administration seeks an expedited path to membership in the North Atlantic Treaty Organization (NATO). Blinken offered no such commitment, instead reiterating the established Biden administration policy line on Ukraine. “We’ll continue to strengthen our security partnership in close collaboration with you to make sure that Ukraine can defend itself against aggression,” he said, without explaining the nature of that “security partnership” or the steps being taken to bolster it. When queried on a parallel point during an interview with Radio Free Europe/Radio Liberty’s Olena Removska, Blinken gave a similarly vague answer: “I don’t want to get into hypothetical questions about what we might do in the future. Let me just say simply that when it comes to trying to deter aggression or respond, we will consider every reasonable option. Because as I said, we’re determined that this not – that there will – that it’s clear that there would be consequences in different areas.” Zelensky, for his part, pointed to “increased” military support from Washington, but did not elaborate further. He then referenced “joint action” on unspecified security projects “in the Black Sea and Azov Sea region,” hastening to add that he “cannot discuss it publicly yet.” Blinken addressed the recent buildup and subsequent withdrawal of Russian forces along Ukraine’s eastern border, echoing previous statements from Biden administration officials: “We’re aware that Russia has withdrawn some forces from the border of Ukraine, but we also see that significant forces remain there, significant equipment remains there. We’re monitoring the situation very, very closely.”

Ukrainian politicians, up to and including Zelensky, have signaled their desire to renegotiate key provisions of the Minsk Protocol, a 2014 peace agreement outlining a path for the reintegration of the separatist Donetsk and Luhansk People’s Republics into Ukraine. The Biden administration has not backed Kiev’s intention to revise the agreement, with Blinken taking the opportunity to reiterate Washington’s long-held policy of consistent support for the Minsk format: “We’ve – we also discussed the diplomacy, the Minsk process and commitments that were made, and we’ll always continue to explore ways to see if there are opportunities to help advance the diplomacy,” he said.

Blinken demurred on concrete U.S. steps to support Ukraine militarily against its Russian neighbor, but signaled Washington’s enthusiastic support for a different kind of war: “As I said, when you look at it, really, Ukraine faces twin challenges: aggression from outside coming from Russia, and in effect, aggression from within coming from corruption, oligarchs, and others who are putting their interests ahead of those of the Ukrainian people. And these two things are linked because Russia also plays on that internal aggression, using corruption and using individuals to try to advance its interests as opposed to those of the Ukrainian people.”

A great swathe of Blinken’s remarks touched on the pressing need for further anti-corruption reforms: “And in that context, we talked about the importance of continuing to move forward with corporate governance. That’s tremendously important, including with regard to Naftogaz, we – but beyond Naftogaz, other major institutions,” he elaborated. Whereas Blinken’s foreign policy remarks were ambiguous by design and largely drawn from previous State Department talking points, his prescriptions on domestic reform were pointed, meticulously detailed, and delivered with a sense of palpable urgency. Blinken gave a long list of specific policy steps Washington expects to see from Ukraine, including a “strong, independent anticorruption board,” comprehensive reform of the judiciary and the security services, and measures taken to reign in the influence of Ukrainian oligarchs.

The joint press conference ended with Blinken’s final exhortation to immediate and sweeping domestic reform: “The last thing I’d say is that the laws are very important, but so is their implementation. And I think from what we hear, the Ukrainian people are looking to see that the laws, once passed, are actually implemented, including against corrupt actors.”

Blinken’s meeting with Zelensky was seemingly intended to serve as a reaffirmation of Washington’s ongoing support for Ukraine. As it stands, the visit did little to clarify the difficult strategic questions central not only to the U.S.-Ukrainian relationship, but to Washington’s broader role in the ongoing conflict between Russia and Ukraine. Does Kiev really have a viable short-term pathway to NATO accession? After six years of bloody stalemate, is it still possible to implement the Minsk Protocol and its follow-up provisions as they are currently written? What further punishments is Washington willing to impose on the Kremlin, and what concrete steps will the Biden administration take in the event of a major military conflict between Russia and Ukraine?

So long as these core issues go unaddressed, the Biden administration’s security commitment to Ukraine will continue to be largely symbolic rather than practical. This status quo is not just ineffective, but, as demonstrated by the Russo-Georgian War of 2008, can have real escalatory costs. Washington’s ongoing strategic ambiguity risks sending the wrong signals both to Kiev and Moscow, further distorting what has been an exceedingly difficult peace process to finally end the Donbass conflict and restore Ukraine’s territorial integrity.