Could Ukraine's Military Stop Russia in a War. The Answer Is No. 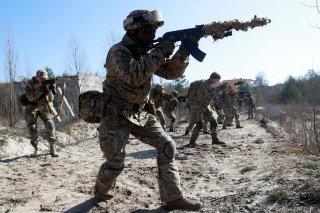 In a recent speech given at Ukraine’s Combat Training Center Yavoriv, U.S. Chargé d'Affaires in Ukraine Kristina Kvien warned against the dangers of further military escalation in the ongoing Donbass conflict. “Let me make crystal clear—my team at the U.S. Embassy and I know first hand—Ukraine was not, and is not, taking provocative actions against Russia. In fact, Ukraine has demonstrated admirable restraint in the face of Russia’s intimidation and aggression,” she said.

But “against the backdrop of Russia’s provocations, it is important to remember that the Ukraine of 2021—and the Ukrainian armed forces of 2021—are vastly different than those of 2014,” added Kvien. “To better address external threats, the Ukrainian armed forces have become a more capable, more professional fighting force, one of the most capable battle-ready forces in Europe today—and the United States is proud that our cooperative security efforts have supported this impressive development,” she said.

Kvien is not alone in her assessment. Western commentators have frequently noted that Ukraine’s armed forces are better equipped for a large-scale conflict with Russia in 2021 than they were at the outset of the Donbass war. But this observation, while popular and partly accurate, lacks crucial context.

In absolute terms, there is little question that Ukraine’s military has substantially improved over the past seven years. In 2014, the military was confronted with two principal challenges: 1) widely demoralized and under-trained personnel, and 2) and a relative lack of modernized military equipment, both in small arms as well as larger hardware like missiles and combat aircraft. Ukraine has made major strides in the first area. With help from western military advisors and a steady stream of defense spending, Kiev has not only reinstilled combat discipline among its troops but erected dozens of fresh brigades. The bulk of the investment has gone into artillery units, which comprise a major plank of Ukraine’s capabilities against the Russian-backed separatist forces of the Donetsk and Luhansk People’s Republics. Though there is much more modernization work to be done, Ukraine has made modest strides in several high-ticket military hardware procurement efforts. Ukraine’s defense sector is developing the advanced Neptune anti-ship cruise missile system, in large part meant to boost the country’s coastal defenses. Kiev is likewise investing in a modern military drone force with an ambitious Bayraktar TB2 procurement deal.

But the underlying problem is that military power is relative, not absolute. Though it is clear that Ukraine’s armed forces are not what they were in 2014, much the same can be said about the Russian troops currently massing on Ukraine’s eastern border and in occupied Crimea. Over the past seven years, the Kremlin has relentlessly invested in a slew of advanced capabilities to which Ukraine still has no clear answer—these include a sophisticated air/missile defense network, some of the world’s most advanced jet fighters, and a raft of modernized infantry fighting vehicles and main battle tanks. Given these trends, it is not at all clear that the balance of relative military power between Russia and Ukraine has meaningfully changed since the start of the Donbass crisis in 2014.

References to Ukraine’s growing military power, if not properly contextualized, risk obscuring the bigger strategic picture: assuming no outside intervention, It is no less the case today than it was in 2014 that Kiev is overwhelmingly likely to lose a full-fledged war with Russia.