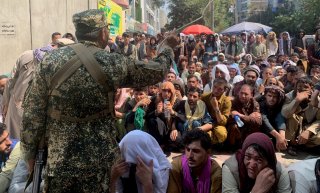 KABUL, Afghanistan – Three months ago, a band-aid was ripped for a bullet wound. President Ashraf Ghani fled the Presidential Palace on the searing Sunday afternoon of August 15, paving the way for the encroaching Taliban to storm right in without a crescendo of bullets. Two weeks later, the last U.S. evacuation aircraft rose into Kabul’s night sky from the Hamid Karzai International Airport (HKIA), dramatically drawing to a close a bitter and bloody twenty-year war.

So what has become of life under the Taliban three months into their iron-clad rule over Afghanistan?

Indeed, it marks a bizarre and brash maneuver from insurgency and into forming a government in charge of 38 million people. Much of the leadership has little experience running formal procedures, a far cry from wielding an AK-47 as a mountain militia. Those in top positions typically prefer to conduct business inside a mosque or away from the confines of an office. If they do show up, it is usually only for a few hours—with ministries and directorates effectively shutting shop after 2 pm.

The Taliban is in over its head—and it is all coming at a time when the nation is on the brink of a harrowing economic collapse.

In the streets—from Kabul to Kandahar to Khost and beyond—life on the surface has resumed; only Afghans are becoming hungrier, poorer, and more desperate and afraid by the day. In less than twelve weeks, the Afghani currency has devalued from around 73 AFG to one U.S. dollar to 92 AFG.

It is expected only to get worse.

“We rely purely on Allah,” Ghaws-u-deen, thirty-five, who sells Afghan fried food on the street, tells me with a brave smile.

Almost every retailer I speak to on the dusty streets tells me that business has dropped from anywhere between 50 to 90 percent since the Taliban takeover. On top of it, the price of staple goods from bread to petrol to meat to cooking oil is ascending.

The latter, one street burger vendor named Amir Mohammad explains, has more than doubled in recent months from the equivalent of $9.80 a container to $22.

Some streets are stuffed with the starving and scared, selling their household items to fill their growling stomachs. At the same time, other areas that once bristled with vibrancy are boarded up skeletons—their owners having fled and left their livelihoods behind.

Sadly, the financial meltdown—driven in large part by Washington immediately freezing $9.5 billion in aid marked for Afghanistan followed by the World Bank and International Monetary Fund (IMF) suspension on funds—has meant much of the budding young generation have had to stop their studies.

Waheed Ullah Wafa, twenty-five, who was studying toward a Bachelor of Computer Science at Kardan University until the Taliban came, took a job as a travel agent two weeks ago.

“It costs too much money to keep studying,” one Afghan, Waheed—who took a job two weeks ago as a travel agent instead—tells me.

Twenty years of war created a somewhat “artificial economy,” meaning that the vast portion of Afghans' employment relied on the foreign footprint through the military, government, contractors, NGO sector, or even just as the primary customer base. Since that bubble abruptly burst, Afghans in overwhelming numbers have been rendered jobless and impoverished. The once middle class has folded into poverty.

The economic downfall has led to a humanitarian disaster of mass proportions. Levels of malnutrition are horrifying, government hospitals are overwhelmed and underpaid, and the few internationally-funded clinics that remain are hurting to keep up with the influx.

The unspoken reality on the ground is also the drastic rise in mental illness. After decades of endless conflict and combat, along with their lives being yanked from beneath them in an instant, girls and women are hardest hit by bouts of extreme depression and anxiety.

Anzoorat Wali, a budding nineteen-year-old martial arts star who was in her final year of high school, has been unable to complete her studies since the Taliban came to power. The outfit has also prohibited the thing she loves most in the world—taekwondo.

“There is nothing left here. Under the government of the Taliban, we cannot do anything for ourselves or our country,” she says softly. “All we can do is stay at home.”

Secondary education for girls in most provinces is still suspended, sports and music are outlawed, many have lost their jobs and fear stepping foot outside the home.

On top of it all is the growing threat of ISIS-K, colloquially termed Daesh. Barely a day goes by that the operatives don’t blow up a building or dispatch shooters to open fire. Yet the Taliban top brass, in a bid to portray a cloak of security and stability, refuse to acknowledge that the terrorist organization even exists on their soil. Instead, the Nangahar-based intelligence director, who goes by Dr. Basheer, assures me that “Daesh is a myth” and that they (the Taliban) don’t even call them by such a term. To the Taliban, they are “Baghyan,” meaning “rebels” in Pashto and grouped in with any anti-government clans.

But there is no one-size-fits-all when it comes to the Taliban, and it is impossible to paint the group with one broad brush. Many speak fluent English, come from affluent and educated backgrounds, and will look me (as a woman) in the eye when speaking. However, just as many are illiterate, took up arms for the outfit after being groomed at a madrassa as a child, and could at any moment switch to the even darker side of Daesh.

Nonetheless, despite much of the hysteria and anxiety puncturing Afghanistan, there is plenty of reason to believe that the Taliban of 2021 progressed significantly compared to its first reign a quarter of a century ago. As a female foreign journalist who has traveled by road to a vast portion of Afghanistan’s thirty-four provinces since August, I am generally treated with respect and considered a “guest” in the blood-spilled nation (which I understand the same politeness is not always applied to local Afghan journalists who report with extreme bravery).

Cases of individuals being targeted and retaliated against by the Taliban exist, but they are by far the exception, not the norm. There are no mass slaughters into the streets or people being dragged en masse in the dead of night, as much of the hype on social media would have you believe.

Afghans are resilient people, and life goes on—even without the buzz of music and foreign cash flow. Cafes and restaurants are still open (and many can be spotted smoking cigarettes or the popular waterpipe known as Hookah), commercial airplanes have resumed transits across the country and to some international destinations such as Islamabad and Abu Dhabi, hotels lure tourists, and cars continue to clog the narrow and ancient Kabul streets.

Yet the doom and gloom of a humanitarian catastrophe cling as the winter winds roll in and snow glazes the serrated mountains of the beautiful, bleeding country. It is a dilemma that the United States and much of the international community will be forced to painfully reconcile with—either recognize the new Taliban regime and release the funds that could stop innocent Afghans from starving to death or pariah the country and hold out for a longer game in the hopes the regime eliminates terrorism and values human rights.

Let’s not be tone-deaf here. Before 2001, there was no government as isolated as the Taliban. Nations refused to recognize them, and refused to give them money. But you know who did provide them with a couple of million to marginally stay afloat? Osama bin Laden.

Holly McKay is the author of “Only Cry for the Living: Memos from Inside the ISIS Battlefield”. McKay is a journalist and war crimes investigator currently based in Afghanistan.