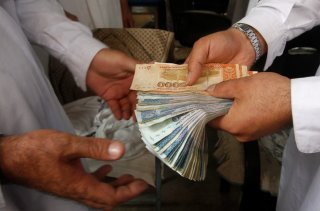 The Taliban announced on Tuesday that it had banned all use of foreign currency within Afghanistan, requiring all transactions to take place using afghanis, the country’s beleaguered currency.

“The Islamic Emirate instructs all citizens, shopkeepers, traders, businessmen, and the public to [...] conduct all transactions in Afghanis and strictly refrain from using foreign currency,” Taliban spokesman Zabihullah Mujahid wrote on Twitter, using the group’s formal name for itself.

Mujahid warned that anyone who violated the order could be subject to legal action, although he did not specify what legal action would be taken.

The Taliban’s order comes as the group has come under increasing pressure to perform the functions of the previous Afghan government, including paying salaries and maintaining public works. Unfortunately, the group lacks the international connections of the previous government, which depended on aid grants for roughly eighty percent of its annual budget. Most countries, particularly the United States, have made clear they will not resume these grants for Afghanistan’s new rulers.

While the group does have some cash inflow—reportedly around $4 million per day—the funds of the previous government are largely out of reach, as much of its treasury was stored in the United States. The Biden administration has refused to release this money to the Taliban, resulting in questions on how it will continue to pay for basic necessities such as food, electricity, and healthcare to the population of roughly forty million.

The UN’s World Food Programme has estimated that more than half of the population will be at risk for acute food insecurity in the coming year, and thousands of Afghans have left the country as refugees, triggering fears of a repetition of the outflow of refugees from Syria and other Middle Eastern states during the mid-2010s.

While the Taliban’s move appears to have been intended to stabilize the afghani’s value, experts have predicted that it will cause increasing disruption to the Afghan economy, which has relied heavily on U.S. dollars during downturns due to their stability. Even after the U.S. withdrawal, dollars were widely traded in the capital.

The currency move came within hours of a suicide attack against the largest military hospital in Kabul, for which the country’s Islamic State branch, known as its “Khorasan Province,” or ISIS-K, has claimed responsibility.