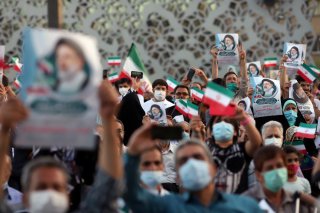 Iran’s 42-year-old Islamic Republic is facing an existential test. Transition looms as Iranians discuss what might occur after the death of 82-year-old Supreme Leader Ali Khamenei, Iran’s dictator for more than three decades.  The importance of hardline Judiciary Chief Ebrahim Raisi’s election to the presidency rests both in Khamenei’s efforts to preserve a revolutionary atmosphere and in the advantage the presidency gives Raisi should a vacuum suddenly occur at the top. Khamenei, after all, was president when Ayatollah Ruhollah Khomeini died and moved quickly to succeed him.

The coming succession may not go as smoothly because Khamenei lacks the religious credentials and charisma that Khomeini enjoyed. Shortly before his 1989 death, Khomeini signaled that Khamenei should follow him as supreme leader. Even those who disliked Khomeini politically respected his religious credentials and revolutionary importance. Nor did they mind Khamenei: The Islamic Republic was already faction-ridden, but most senior Iranian officials saw Khamenei as weak and colorless, a good compromise. The Assembly of Experts, the clerical body charged with selecting a new leader, essentially became a rubber stamp.

Khamenei, however, had greater ambitions. In 1994, Khamenei tried to assert the same religious credentials as Khomeini but faced widespread rejection and ridicule. He never recovered his stature; he based subsequent rule more on force than intellectual persuasion. This means that upon Khamenei’s death, his influence will evaporate; no one need fear him.

Raisi may now seem a likely successor, but much could go wrong. The Islamic Revolutionary Guard Corps could derail his efforts. Other candidates—Mojtaba Khamenei, for example—could throw a wrench into the gears. Compromises might require a council of leadership rather than an individual creating a new dynamic of factionalism at the top. Iranians of all persuasions, meanwhile, could use the temporary vacuum left by Khamenei’s death to demand an end to the Islamic Republic.

Raisi, himself, could prove the catalyst to the Islamic Republic’s undoing. He is a true believer. Those who heard him speak during a February 2021 reception at the Iranian embassy in Baghdad described a firebrand revolutionary reminiscent of a 1920s Lenin. Should he double down on cultural revolution even before Khamenei’s death, he could unleash a spark that could spiral out of control. Regardless, it would be foolish to believe that the Islamic Republic is permanent. What might Iran become should the Islamic Republic fail?

While there is wishful thinking among the Iranian émigré population, there is little likelihood that Iran will become a thriving, pro-Western democracy. Consider the possible scenarios:

- Military Dictatorship: The Revolutionary Guards now control up to 40 percent of Iran’s economy, monopolize weaponry, and are well-positioned to fill any vacuum. A military dictatorship might not make Iran an ally akin to Abdel Fattah el-Sisi’s Egypt, however. To assume the Revolutionary Guards will easily shed their ideology is projection. The Revolutionary Guards have indoctrinated some of their senior leaders from the ages of nine or ten years old when they entered after-school programs sponsored by the paramilitary Basij. Their rhetoric may sound far-fetched and conspiratorial to the West and cosmopolitan Iranians, but no one should underestimate the impact of a generation of brainwashing.

-Civil War: At almost every moment of central government weakness, ethnic and sectarian minorities along Iran’s borders have risen in rebellion. While many Iranian studies scholars accept that Iran, despite its ethnic mosaic, is a cohesive whole because its identity as an entity predates the rise of the ethno-nationalist state, other scholars—most notably Azerbaijan expert Brenda Shaffer—argue that ethnic identities are more pronounced and corrosive to the Iranian whole than many acknowledge. If Shaffer is right, then Iran may face a serious challenge to its integrity upon Khamenei’s death or during a sustained uprising. The Revolutionary Guards may counter this. Remember, Reza Khan—the father of the ousted shah—gained fame and eventually the throne for his role in putting down rebellions in the late 1910s and early 1920s. Add into the mix the reality that neighboring states might seek to stir the pot, as the Saudis allegedly did with Jundallah and the Baluchis, and the result may be several years of insurgency and civil conflict.

-Civilian Transition: When Khomeini led the revolution, he united Iranians against the shah, but was vague about what might come next: He promised an Islamic democracy but never defined it until too late. Many Iranians complain that what emerged was neither. Still, while some realists suggest democracy is unattainable in the Middle East (Tunisia, Israel, and Iraq’s experience aside), Iran could also become an exception. Iranians do not view democracy as some Western imposition, but rather have their own indigenous experience with a constitutional revolution in the first decade of the twentieth century.  The shah’s son, meanwhile, remains a more potent symbol than many outsiders realize; I have seen Iranians from inside the country come across the former crown prince unexpectedly and react with kneels, tears, and hugs. Restoration of the monarchy, however, is unlikely although the crown prince could have an important role as a unifying force chairing a new constitutional convention.

Regardless of the scenario, no Western official should expect post-Revolutionary Iran to be pro-West. The 1953 coup against Mohammed Mosaddegh is a red herring: not only was Mosaddegh constitutionally in the wrong and himself seeking to stage a coup, but also ignoring the U.S. occupation of part of Iran just seven years earlier is bizarre. Still, perception means more than reality, and four decades of anti-Americanism demonization impacts mindset. Anti-Americanism is real for other reasons, especially given the abuses and degradations Iranians suffered in the 1960s and 1970s. Greedy Western politicians tying themselves to the Mujahedin al-Khalq make perceptions of America worse among ordinary Iranians given that organization’s embrace of Saddam and the terrorism in which it engaged inside Iran.

Other history matters. While colonial powers—the United Kingdom and Russia—never formally colonized Iran, they did victimize and humiliate it.  As a result, Iranians are paranoid about the intentions of outside powers, especially in the West. Intellectual history is also important. Khomeini’s revolution succeeded because it tied together not only Islamists but also xenophobes and leftists. In 1962, for example, Jalal Al-e Ahmad penned a hugely influential book Gharbzadegi, often translated into English as Westoxification, in which he argued that Western influence poisoned Iranian culture and eroded its potential. In effect, it claimed that the key to Iranian greatness was extricating the West from Iran, not unlike an Iranian nationalist equivalent of Muslim Brotherhood theoretician Sayyid Qutb’s Milestones. Ali Shariati, meanwhile, successfully melded Islamism with socialism and Third Worldism. Shariati died young and under mysterious circumstances, but his ideas still permeate Iranian political thinking.

The Islamic Republic’s demise should be a U.S. goal—it certainly is an Iranian one. While Iranians do not seek intervention, the goal of any U.S. administration should be to do nothing that would preserve the revolutionary system. Still, it is crucial to approach Iran’s transition with realism rather than a Pollyannaish notion of a pro-Western public waiting to embrace America. Iranians eventually will win their democracy, but it will be a long transition colored by history with a prickliness that will make French and Turkish nationalism seem easy-going.