Where are Turkey-Iraqi Kurdish Relations Headed? 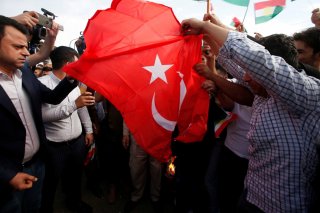 Just over three decades ago, the United States, operating alongside France and the United Kingdom, launched Operation Provide Comfort. The idea was simple: The coalition states would create a safe haven in Iraqi Kurdistan, both to stem the refugee flow into Turkey and to prevent Saddam Hussein from resuming his efforts to slaughter the Kurds.

Tribal leader Masoud Barzani, who years earlier had fled with his wife and sons to Iran after Saddam had slaughtered thousands of their tribesmen, returned with his family with not much more than the beat-up cars they drove in on and the clothes on their backs. Today, they are multibillionaires and live in palaces and mansions originally built by the Iraqi dictator they say they opposed but with whom, when convenient, they allied.

The Barzanis’ wealth is rooted not only in their blurred interpretation of divisions between personal, party, and regional resources, but in a devil’s bargain that Masoud struck with Turkish president Recep Tayyip Erdoğan in which he subverted Kurdish nationalist desires to personal enrichment.

While the Kurdistan Democratic Party’s (KDP) ties to Turkey are today warm, this is historically an exception rather than a rule. Saddam’s Iraq conspired with Iraqi Kurdistan to keep the Barzani- and Jalal Talabani-ruled territory isolated. There was no airport in Iraqi Kurdistan, and Saddam’s government blockaded all passage across the line of control for all foreigners except for UN personnel and the occasional diplomat.

Many NGO workers and journalists would instead travel to Syria and then, if Syrian intelligence permitted, fly from Damascus to the northeastern Syrian city of Qamishli on an old Soviet aircraft and then take a taxi to the small, informal crossing point on the Euphrates River. There, a small motorboat would make the five-minute trip across the river at a point only about a mile north of the Iraqi army’s front line. If the boat engine stalled, passengers would have a stark choice: jump into the river and try to swim to the other bank or drift down into Iraqi territory and a certain prison stint for illegal entry. For Western citizens, Iran was an even less attractive option since Iranian consulates seldom issued Westerners multiple entry visas, necessary to traverse the Islamic Revolutionary Guards-controlled border.

Turkey shared the largest border with Iraqi Kurdistan, but generally opened its border only for Kurds and Turkish truck drivers carrying cheap oil. In September 2000, I was the first non-diplomat, non-local to transit the border, but only after some hardball and a seventeen-day delay in Diyarbakir as the Turkish General Staff and Turkish foreign ministry bickered about my transit. After I got in, the U.S. State Department asked me to distribute invitations to local Kurdish activists for a visitors program in the United States. Passports were hard to come by since most could Kurds could not go to Baghdad to acquire them. After a significant struggle to gain travel documents, the Turkish government simply refused passage.

The decades-long Kurdistan Workers Party (PKK) insurgency heightened tensions further as generations of Turkish politicians believed Kurdish self-government in Iraq could inspire the PKK’s fight to achieve a similar outcome in Turkey. In order to control if not quash Kurdish autonomy, Turkey pursued a number of strategies: It periodically staged incursions into Iraqi territory in order to fight the PKK and often left small forward operating bases behind in order to limit subsequent Iraqi Kurdish development. Likewise, after Barzani and Talabani fought a civil war between 1994 and 1997 over the region’s customs revenues, the Turks inserted “Peace Monitoring Forces” which stayed well beyond their mandate. All the while, Turkey dumped cheap manufactured goods on Iraqi Kurdistan and did everything possible to strangle its economy.

It was against this backdrop that Erdoğan decided that, given new realities, the best path forward was to co-opt the Kurds rather than seek to crush them. In practice, this meant striking a deal with the Barzanis who controlled Iraqi territory across the entirety of the Turkey-Iraq frontier. While he was Iraq’s oil minister, Abil Abdul Mahdi spoke about discrepancies between the quantity of Iraqi and Iraqi Kurdish oil Turkey reported exported from Ceyhan versus meter readings; he suggested the difference was split between Erdoğan and Masoud Barzani. Erdoğan and Barzani also profited, ironically, from the control of oil fields by PKK-affiliated Syrian Kurds, who because of their geographic isolation had to sell oil at steep discounts to Barzani, who in turn sold the same fuel at slightly less discount to Turkey.

The Barzanis also granted companies affiliated with Erdoğan preferential and lucrative construction contracts as the Kurdish leadership sought to create an illusion of progress and development, in effect turning their zone into a region of first-world hotels and third-world hospitals. As Barzani amassed huge profits from deals negotiated personally with Erdoğan with no one but close family members in the room, Barzani also began allowing Turkey’s intelligence services to have free rein inside the territory he controlled. In July 2019, terrorists allegedly linked to the PKK killed a Turkish intelligence agent in Erbil in apparent retaliation for Turkish airstrikes against the PKK and its allies. The episode embarrassed Barzani less because it showed faults in his security state and more because it exposed the close working relationship between his son Masrour and Turkey’s agents. More recently, Turkey’s involvement with the Barzanis extends to manipulation of vote tallies on election day.

As the Barzanis trade nationalism for wealth and power, the question becomes what might happen should Erdoğan disappear from the scene. The deals the two leaders made were between individuals rather than systems, and so it remains unclear if a more Kemalist government in Turkey or one less corrupt that Erdoğan’s would abide by the same agreements. After all, it is not Turkey’s broad society and economy that benefit from the Turkey-Iraqi Kurdish rapprochement but rather just a small circle of companies surrounding Erdoğan.

Certainly, Erdoğan’s political demise may not be imminent. He is a survivor. While Erdoğan is unpopular against the backdrop of currency collapse, he controls the system enough that lack of popularity might not translate into a loss at the ballot box. Still, he is mortal and rumors about ill-health persist.

While Masrour may confuse the status quo with permanence, Erdoğan’s fall would set off both a scramble for power inside Ankara and score-settling in which secret deals with the Barzanis may become fodder to embarrass Erdoğan’s family members and aides.

At the very least, Erdoğan’s downfall will lead to a period of uncertainty inside the Barzanis’ mountaintop headquarters. A new Turkish leadership will play hardball in order to extract concessions or re-order contracts. This will lead Kurdish factions surrounding Masrour to fall while others, perhaps those closer to Iran and surrounding his nephew Nechirvan will rise.

Should Turkey return to the status quo ante and once again isolate Iraqi Kurdistan, the Barzanis would not go down without a fight. Americans seldom maintain broad historical awareness of the areas in which they focus. For many in the Biden administration, the Barzanis have always had cordial relations with Turkey and have been American allies. In reality, just as Masoud embraced Saddam for the sake of preserving his personal power just eight years after the Iraqi government slaughtered his fellow tribesmen, so too do the Barzanis have deep ties with Iran that they might again activate should preservation of power and wealth mandate it.

This then poses a real problem for American assumptions that they can rely on a Barzani dictatorship, even if the rest of Iraq falls sway to Iranian influence. Rather than double down on an increasingly corrupt and autocratic system in Iraq’s north, perhaps the best way forward for Washington would be to prioritize systematic reform in Iraqi Kurdistan to cement a real democracy rather than a family-run kleptocracy.