Who’s Really Paying for Ukrainians to Come to the United States? 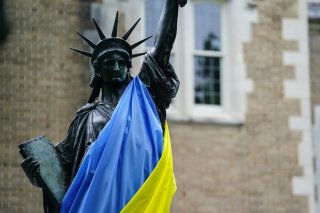 In response to the crisis in Ukraine, the Biden administration has launched a new immigration program called “Uniting for Ukraine.” The program offers Ukrainians (and even non-Ukrainian immediate family members) a chance to come to the United States via supposedly “private,” non-taxpayer-funded sponsorships.

Except that the privately funded program can benefit from taxpayer money.

It does this in two ways: First, public funds can be used to enable private individuals to bring Ukrainians into the United States. Second, Ukrainians would be immediately eligible to receive welfare benefits upon their arrival.

Uniting for Ukraine enables people to travel straight from Europe—where they have already been granted work permits and other benefits by the European Union (EU)—and stay here for an initial period of two years under “humanitarian parole” (which is unrelated to parole in the criminal justice system).

As President Joe Biden announced, the idea is to bring some 100,000 Ukrainians here quickly, with a focus on reuniting families without using federal money. To benefit from this program, Ukrainians will need to be “privately” sponsored by “U.S.-based supporters” who commit to providing them with financial support for the duration of their stay. This sponsor does not have to be a U.S. citizen or even a green card holder. Asylees, refugees, parolees, Temporary Protected Status holders, and beneficiaries of deferred action (including DACA) or Deferred Enforced Departure can also act as supporters under this program.

Even though only one U.S.-based supporter can complete and file online Form I-134 (Declaration of Financial Support) on behalf of one beneficiary, multiple supporters (including representatives from various human rights and refugee advocates organizations) can agree to support one beneficiary to facilitate approval. So, financial support can come from organizations such as refugee resettlement agencies that are, in turn, mostly funded by U.S. government contracts. In the end, U.S. tax dollars that go to resettlement contractors can in turn be used as additional support in the Declaration of Financial Support form submitted to admit a Ukrainian into the United States.

Furthermore, upon arrival, per the Additional Ukraine Supplemental Appropriations Act, 2022 (H.R. 7691) signed by Biden in May, Ukrainian parolees will receive federal assistance and refugee resettlement benefits (recently extended from eight to twelve months), even though they're not actually refugees. Typically, parolees are only eligible for employment authorization and Social Security numbers and, unlike refugees and Special Immigrant Visa holders (SIVs), they are not eligible for refugee resettlement assistance or other federal benefits.

But H.R. 7691 changed this and gives Ukrainian parolees and their family members (current and future) access to resettlement assistance, entitlement programs, and other federal benefits. The new law also provides $900 million for additional “Refugee and Entrant Assistance,” to be used for grants or contracts with qualified organizations, including nonprofit entities. These nonprofits could very well include the nine refugee resettlement agencies funded by the U.S. Department of State, which can pledge to financially support a Ukrainian beneficiary once in the United States.

But it doesn’t end there. Parolees receiving federal assistance and resettlement benefits can use those funds to sponsor additional Ukrainian parolees who in turn will receive the same federal assistance upon arrival. And, just in case these funds are not sufficient, resettlement agencies will be able to provide additional funds (given to them by the American taxpayer) to get the process in order, potentially creating a cycle of migration.

In sum, this “private” sponsorship program seems more linked to federal money than to individual contributions. But, unlike the official refugee resettlement program which has a ceiling set each year, it flies under the radar when it comes to accountability and numerical ceilings. An unlimited number of Ukrainian beneficiaries can use this “private,” streamlined pathway to come to the United States. Meanwhile, in fiscal year 2022 refugee resettlement admissions remain low. Only a total of 15,100 refugees were admitted so far this fiscal year under a 125,000 ceiling. Of the 15,100 only 1,028 were Ukrainians.

The Biden administration designed this fast-track admission for Ukrainians already in the EU who wish to come to the United States to join family members and/or pursue better opportunities at no cost to the American taxpayer. The reality could be quite different as federal funds will likely be used to facilitate their admission and life in the United States. But who’s counting?

Nayla Rush is a Senior Researcher at the Center for Immigration Studies.