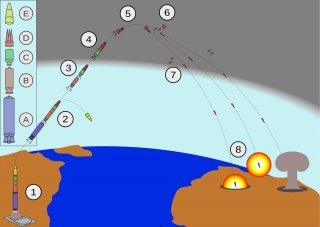 The critics of intercontinental ballistic missiles continue their attack on America’s nuclear deterrent while pushing forward a series of completely false narratives to make their points. In particular, on April 21 former Secretary of Defense William Perry and Tom Collina of Ploughshares noted in an op-ed published by Defense One that the United States must eliminate the new ground-based strategic deterrent or ground based strategic deterrent. Their alternative would eventually require the United States to rely solely on at-sea-submarines and whatever bombers might be on alert, a sharply diminished deterrent the United States has not relied upon for the entirety of the nuclear age.

Their false narrative is made up of four connected misconceptions.

The first assumes since America’s 450 ICBM silos are in known locations, the Russians will in a crisis be tempted to pre-emptively launch enough missile warheads to destroy the U.S. silos and their associated launch control centers (495 in all).

The second assumes during any crisis a Russian launch to be imminent, and thus a U.S. president would launch America’s ICBMs quickly during a crisis to “shoot first.”

Third, this instability or temptation to go first leads to assuming American ICBMs have no deterrent role. Perry now argues the U.S. ICBM force would never be fired at an adversary and destroy any targets of substance. To do so they would have to be fired first, and the United States must keep to a pledge of no first use of any nuclear weapons so obviously, America’s ICBMs aren’t useful.

Except, however, and this is the fourth point, the ICBM’s newfound role is thus actually only to act as a “sponge” to absorb upwards of one thousand attacking Russian warheads. And since that is the case, the United States can keep the fifty-year-old Minuteman III ICBM force rather than acquiring a new more capable GBSD.

This is a big switch for Perry and Collina. Their previous anti-ICBM arguments had obviously run out of intellectual gas. They finally acknowledged what nearly every professional assessment of this matter had concluded, including the nation’s Nuclear Posture Reviews done by the past four administrations. Given any such Russian attack on America’s ICBM force would have to involve some nine hundred or more attacking warheads, [using two warheads for every U.S. ICBM related target], the U.S. response from submarines at sea, bombers on alert and surviving ICBMs, would be overwhelming, and as such would make any initial Russian attack suicidal.

This admission that such an attack would indeed be suicidal logically wipes out the entire underpinning of their false anti-ICBM argument—such a feared massive Russian attack is not going to happen, crisis or no crisis.

Having finally admitted that this decades-long fight to kill ICBMs had no logical basis, you would think the ICBM critics would admit intellectual defeat. But that is not the case. Perry and Collina invent another false idea. They admit the Russians would never logically launch such an all-out attack against America’s ICBMs, but a false alarm might make the United States think such an attack is coming, and the U.S. president could still prematurely launch America’s ICBMs and thus inadvertently trigger Armageddon.

It is true that in 1980 a training tape was accidentally inserted into the U.S. warning system that made it appear a major Soviet attack was underway. That type of problem was fixed, permanently, and has not of course happened since.

In any case, U.S. policy for decades has been to confirm the detonation of an enemy nuclear warhead on U.S. or allied soil before we would respond. America does not have a policy of launch on warning and as the national security council’s former top nuclear specialist Robert Bell explained in some detail in 1997: the United States has never had such a policy.

This is why the United States has since at least 1962 maintained a robust nuclear triad of forces, ensuring that a credible number of U.S. forces would survive even the most massive of Soviet and now Russian attacks, and being able to retaliate with overwhelming force that would make any such adversary attack suicidal, a point Perry and Collina accept.

But still obsessed with killing U.S. land-based missiles, Perry and Collina now claim that far from any danger of the U.S. ICBMs being launched prematurely in a crisis, the Minuteman III is actually designed never to be used!

Alternatively, all America’s ICBMs do is to attract nearly one thousand Russian warheads as a nuclear “sponge,”  diverting those warheads toward the country’s ICBM silos spread out over sparsely populated rural states and not on top of America’s biggest cities.

This “sponge invention” by ICBM and nuclear critics is just that—a complete invention.

Now it is true, an adversary such as Russia would find it technically impossible to carry out a successful disarming attack against all U.S. ICBMS. This has been detailed by multiple U.S. military and civilian nuclear leaders over the decades. This is especially true since the end of the Cold War and the implementation since 1991 of four key nuclear reduction agreements which have cut deployed and accountable U.S. and Russian strategic nuclear warheads some 90 percent.

The previous Soviet missile threats during the height of the Cold War opened up what President Ronald Reagan described as  a serious “window of vulnerability.” Through arms modernization, and peace through strength, that Soviet threat was ended. That window has now been closed. Thus, in the absence of an all-out Armageddon-type Russian launch of missiles against the United States, the country is able to hold at risk key Russian reserve ICBM forces should it have to retaliate with nuclear forces, including America’s highly capable but aging ICBM force.

In fact, U.S. ICBMs and the future GBSD are and will be the most cost-effective, most responsive, and most accurate deterrent in the United States’ possession. To keep those characteristics the United States has to replace the fifty-year-old Minuteman III force as scheduled from 2029–2036. The annual investment needed would be some $1.2 billion more on average for the lifetime of the new GBSD force than what the Air Force is now spending for ICBMs, hardly a budget buster. In fact, it is a great deal.

President John F. Kennedy explained the Cuban missile crisis of 1962 ended peacefully because as he said at the time, the newly installed Minuteman I ICBM force “was my ace in the hole” that enabled the president to make the first secretary of the Communist Party of the Soviet Union, Nikita Khrushchev, stand down and avoid Armageddon.

Since Minuteman I went on alert the day that Kennedy announced the Soviets had placed missiles in Cuba in October 1962, America’s ICBM force has been on alert nearly forty million minutes and not once has a U.S. president ordered the missiles to be launched. Why? The ICBMs are stabilizing.

In fact, through the deployment of the Minuteman II, Minuteman III, Peacekeeper and an upgraded Minuteman III, the United States through twelve administrations, has kept numerous crises from breaking out into open conflict, won the Cold War and ended the Soviet empire, and continued to keep the nuclear-armed superpowers from direct armed conflict with each other in the Pacific, the Middle East and in NATO.

In short, America’s ICBMs and its nuclear triad are a key stabilizing factor in U.S. deterrent policy.

As the motto of the American Strategic Air Command says: “Peace is our profession.”

Peter Huessy is the president of Geo-Strategic Analysis, a consulting firm based in Potomac, Maryland he founded in 1981.