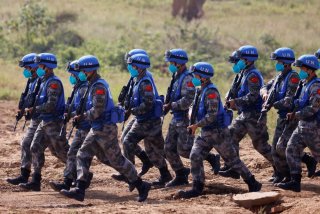 During the 2000 U.S. presidential campaign, former U.S. secretary of state Condoleezza Rice, then adviser to the George W. Bush campaign, stated that “extended peacekeeping detracts from our readiness.” She was alluding to preparedness in terms of what she viewed as the U.S. military’s global priorities: combat and deterrence. Although her comments were in reference to NATO missions, they might as well have been directed at United Nations peacekeeping. Small wonder that during the Bush administration the United States stopped providing military forces for UN peacekeeping, as it instead waged war on multiple fronts.

Ever since their inception in 1948, UN peacekeeping operations have helped prevent conflict between states as well as stabilized countries emerging from war. Unfortunately, the need for such operations is likely to grow in the coming years as climate change, economic inequality, overpopulation, resource scarcity, extremist ideologies, and mass migration fuel conflict around the world. Naturally, as a consequence, the demand for peacekeeping soldiers, commonly known as “blue helmets” for their emblematic headgear, will also increase.

As peacekeeping operations are primarily cobbled together from tactical units, such as battalions and brigades, that countries provide on a voluntary basis, the functioning of these operations will depend on the willingness of countries to provide these contingents. The United States did provide such units to the UN until 1999—the last such deployment being in Macedonia. Yet ever since the George W. Bush administration, any consideration of such troop deployments was shelved in light of America’s war commitments in Afghanistan and Iraq. Any forces that it may have contributed to UN peacekeeping operations were diverted to those two frontlines.

Now, with the U.S. withdrawal from Afghanistan and the announcement of the end of the U.S. combat mission in Iraq, the Biden administration has the opportunity to restart such military contributions. In doing so, it would help stabilize fragile states, strengthen UN peacekeeping, build U.S. peacekeeping capacity, counter-balance Chinese influence, as well as demonstrate America’s commitment to the rules-based order and multilateralism.

Although its experiences in Iraq and Afghanistan have understandably soured the United States to the notion of state-building, the need to bolster fragile states and to give warring sides the breathing room to advance peace processes is not going away. In fact, neglecting such a need will lead to greater international instability, along with the likelihood of increased mass migration and ideological extremism.

Moreover, UN peacekeeping operations are fundamentally different from American-led military interventions. Peacekeeping operations possess widespread international legitimacy and require less use of force as they are deployed in environments in which there is presumably a budding or fragile peace. Not surprisingly, they are less dangerous for soldiers than serving in active combat environments, such as Afghanistan or Iraq. There have been approximately 3,000 military fatalities in over seventy UN peacekeeping operations since 1948. In comparison, more than twice that many American soldiers have died in just Iraq and Afghanistan, and nearly 95,000 American soldiers lost their lives during the Vietnam and Korean Wars.

By enabling countries to share political, military, and financial responsibilities, peacekeeping operations are also cost-effective, and altogether have an annual budget that is less than 1 percent of U.S. defense spending.

Admittedly, UN peacekeeping operations are not without flaws. The recurrent scandals involving abusive and negligent behavior by a small subset of peacekeepers has been shameful. In such matters, the UN and troop-contributing countries must ensure vigilance, prevention, and accountability. Despite these problems, when appropriately deployed, UN peacekeeping operations have reduced violence, as well as prevented the relapse and spread of conflicts. They have markedly advanced peace in several countries, such as Timor-Leste, Liberia, Namibia, and Sierra Leone.

As a permanent member of the Security Council, the UN’s executive organ charged with managing peace and security issues, the United States plays a decisive role in planning and authorizing these operations. Although it is in arrears in its payments, the United States is the biggest financial donor to UN peacekeeping, and is expected to pay almost 28 percent of the nearly $6.4 billion annual peacekeeping budget.  However, neither its financial contributions nor its encouragement and support of other countries’ troop contributions are a substitute for having its own forces deployed in peacekeeping operations.

Even though American civilians, police advisors, as well as military staff officers, observers, and experts work in these operations, their numbers are small, especially when compared to the number of troops deployed in tactical units. Of the roughly 86,000 personnel from around the world serving in twelve operations, over 70 percent are contingent troops. They form the backbone of most UN peacekeeping operations.

Other permanent members of the Security Council, such as China, France, and the UK, already provide such forces, as do European countries, such as Germany, Ireland, Italy, Spain, and Sweden. However, the majority of troop units come from developing countries, such as Bangladesh, Ethiopia, India, Nepal, and Rwanda, which can benefit financially from UN funding.

Consequently, it is not surprising that there often exists an expectations gap between the countries that fund and authorize these operations and the vast majority of countries that provide troops and execute the peacekeeping mandates on the ground. Often espousing universal values, the former tend to take a muscular approach. For the sake of political and financial expediency, it is not unheard of for them to authorize UN peacekeeping deployments into situations necessitating a more robust military intervention, and where the path to peace is tenuous. On the other hand, unless their troops are deployed in an area that they see as vital to their respective national interests, many troop contributors take a more cautious approach because of the operational risks their soldiers face. They sometimes justify their hesitancy to act in terms of their wariness of foreign meddling in the affairs of another country, especially given their own histories of being colonized.

This divergence of approach between policymakers and troop contributors has led to some operational problems in recent years. For instance, in Mali, UN peacekeepers face substantial challenges in fulfilling the Security Council’s mandate in an ever-changing political and security environment that is exceptionally dangerous for them.

While the peacekeeping disasters of the 1990s, such as in Bosnia, Rwanda, and Somalia, can partly be attributed to the unrealistic expectations regarding UN peacekeeping in the buoyant period immediately after the Cold War, the differences in perspective between policymakers and troop contributors did not help either.

By deploying forces, the United States will gain a more palpable appreciation of the challenges on the ground, enabling it to bridge some of the differences between policymakers and troop contributors. This would improve Security Council decisionmaking and peacekeeping effectiveness. The UN would also gain from having well-equipped and trained American troops augmenting its peacekeeping ranks.

American troops would also benefit by further developing their diplomatic skills and engendering goodwill by collaborating with soldiers and civilians from other countries, as well as with local populations. They would also be able to hone their peacekeeping competence, distinguished from warfighting by its intrinsic restraint.

Furthermore, once it provides units for an operation, the United States would be in a position to credibly lobby the UN to secure the position of that operation’s Force Commander, the top military post in UN operations. Not only would this give senior American military officers the opportunity to lead a multi-national UN force, it would preempt any concerns about having American troops serving under foreign command.

From a broader geostrategic perspective, American troop contributions would also help neutralize China’s growing influence at the UN. Given that China is not only the second-largest financial donor but also the top troop contributor among the permanent members of the Security Council, it is possible that, if unchecked, in the near future it will wield greater influence than America on UN peacekeeping. The emerging bipartisan consensus in Washington regarding the challenge posed by Beijing may help overcome any resistance from traditionally UN-skeptic U.S. politicians to provide troops. In fact, if both countries’ forces are deployed in the same UN peacekeeping operations, new avenues of cooperation may even emerge between the two powers.

Regardless of these potential benefits, the harrowing events surrounding the 1993 Battle of Mogadishu are sometimes cited as the reason behind America’s reluctance to contribute forces to UN peacekeeping missions. During that battle, eighteen U.S. servicemen, who were not part of the UN peacekeeping operation in Somalia, but were working alongside it, were killed. The fact is that the United States went on to contribute UN peacekeeping forces elsewhere in the years following that tragedy. Nevertheless, one lesson that can be gleaned from the debacle in Somalia is that American forces should not be deployed in UN peacekeeping operations in environments where there is a tangible terror threat, as they are likely to be targets, even more so now given the U.S. War on Terror.

Coincidentally, the War on Terror was launched just a few years after America stopped contributing forces for UN peacekeeping. Providing troops now would go far in signaling a change in the U.S. approach to the world from the era of the presidency of George W. Bush, an epoch that continues to cast a shadow on American foreign policy. It would prove that the Biden administration is genuine in its avowed commitment to the rules-based order and multilateralism, not just paying lip service to these ideals.