The Withdrawal from Afghanistan Deserves to be Celebrated 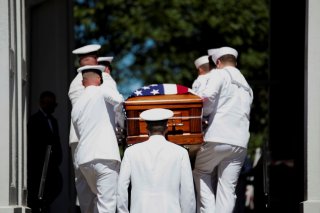 The U.S. withdrawal from Afghanistan deserves to be celebrated. This may seem jarring if one has followed the news coverage bemoaning it as disastrous. Tragedy, of course, accompanied the withdrawal, but that is what happens when one loses a war. But when one has been fighting a war that did not deserve to be fought, its loss is nothing to mourn.

For the vast majority of Americans, it will seem unnatural, even antithetical, to argue that losing a war could be celebrated. The war’s loss, and the potential impact it will have on Afghans, has prompted extensive heart-wringing in the United Kingdom and Europe as well, as the potential for Taliban’s rule, so offensive to Western values and sensibilities, comes into sharp focus.

The West’s involvement in Afghanistan may not grind to a complete halt. The Biden administration is right to pledge retaliation against the local Islamic State affiliate that claimed the attack that killed thirteen American soldiers. Meanwhile, many a would-be-Flashman such as Bernard Henri Levi have taken up the cause of the Panjshir Valley and the potential for Ahmad Massoud, son of the famous anti-Taliban leader Ahmad Shah Massoud, to lead a new resistance movement in the spirit of his father’s Northern Alliance. But there is no reason for the United States to get involved again unless the Taliban break their pledge not to support international terrorist groups.

As President Joe Biden said on 16 August “Our only vital national interest in Afghanistan remains today what it has always been: preventing a terrorist attack on American homeland.” The withdrawal decreases the risk of such an attack. The Taliban may be a bloody medieval extremist movement, but the past twenty years have made clear that hosting international terrorist organizations will bring them far more pain than gain. The Taliban had pledged not to do so in the February 2020 peace agreement reiterating this after the fall of Kabul.

While there is little reason to trust the Taliban’s words rather than their actions, the reality is they have in fact been fighting the United States’ primary Islamist extremist terror threat. Given the dearth of media coverage of Afghanistan prior to August, it is little surprise that many are unaware that the Taliban has been fighting the Islamic State for some time. They have not repudiated Biden’s comments to retaliate against the Islamic State. Furthermore, drone warfare has enabled counterterror efforts against Al Qaeda in the Arabian Peninsula and other affiliates without a permanent ground presence. The Taliban may be antithetical to so much of what the West rightfully holds dear, but there are plenty of governments, dictators, kleptocracies, military states, and monarchs who the United States does not invade.

The idea of a U.S.-led world order in which a “responsibility-to-protect” is invoked whenever injustices are meted out against helpless people sounded nice in the 1990s amid talk of “the end of history” and with the United States’ emergence as a global hegemon. But it has been nearly thirty years since the concept was shattered by the United States’ failed intervention in Somalia, and twenty years since Hollywood memorialized this concept in the film Black Hawk Down (incidentally, released two weeks after the Taliban surrendered).

Beyond Afghanistan, one need not look far for evidence of the limitations in eradicating bad actors, or the occasional need to partner with them. It has been more than a decade since the terrorist who infamously made Afghanistan his pre-9/11 redoubt, Osama bin Laden, was killed by U.S. special forces—in Pakistan‘s Abbottabad. The location of bin Laden’s rather lavish hideout, where he was accompanied by much of his nuclear family, is particularly significant.  As CNN’s Tim Lister noted at the time “Abbottabad is home to Pakistan’s equivalent of West Point.”

If all the Cassandras bemoaning the Afghan withdrawal truly believed the U.S. withdrawal was going to reignite Al Qaeda, then they would do well to begin by questioning U.S. military funding to Pakistan—at least US$22.8 billion since 9/11. And while such funding has fallen considerably, it is not as if there have been any actual costs for Islamabad over its hosting of bin Laden or the Taliban, whose leadership operated out of Pakistan for much of the war. Pakistan has done little to obfuscate its celebrations of the Taliban victory.

While Islamabad’s own human rights violations occasionally generate widespread condemnation, calls to action against its ruling military-intelligence clique and their terrorist connections are almost unheard of. Even former National Security Advisor John Bolton—of “bomb Iran,” “bomb Venezuela” fame—in condemning Pakistan recently for The Washington Post merely said it justified extending the U.S. mission in Afghanistan, not taking the battle over the Durand Line to Pakistan.

More jarring grandstanding has come from Tony Blair and Prince Turki Bin Faisal whose claims the withdrawal will inflame the terrorist risk contrast with the lack of introspection over how the Iraq War and Saudi Arabia’s pre-9/11 links to Al Qaeda may have aggravated the terror threat.

War with Pakistan—a country with nuclear arms—is, of course, all-but-unimaginable compared to the scale of the Afghan conflict, but admonishes that a small Western force could have kept the Taliban at bay are misleading, at best. Ex-Minister of Parliament Rory Stewart and Tom Tugendhat, Chair of House of Commons’ Foreign Affairs Committee, have argued that a small force—roughly around the 2,500 U.S. soldiers who have been in the country in recent months—could be sustained in Afghanistan at minimal risk to their own lives, invoking the U.S. forces’ presence in South Korea.

The low risk to U.S. forces of late has only been due to their effective retreat from any rural outposts and the Taliban’s agreement not to target Western forces in exchange for peace talks and ultimately last February’s peace deal. And while U.S. forces have suffered on average below fifteen fatalities annually over the last five years, hundreds of Afghans, many civilians, have been killed each month. While Taliban attacks have often been to blame, U.S. allies have been accused of atrocities and terrorizing civilians.

Anyone with an appreciation for basic human rights will bemoan their likely unwinding by the Taliban and in particular the threats to women and religious minorities such as the Hazara. Yet it is impossible to weigh these violations, the lost opportunities, and violence that result, with the thousands of Afghan civilians and soldiers who risked losing their lives without withdrawal.

While there is a very real risk of further Taliban atrocities, the U.S. presence in Afghanistan for some time served to pour fuel on the country’s fires. The counterproductive nature of the U.S. role, via its support for a corrupt puppet government filled with warlords (with little more respect for human rights or accountability for their violations thereof than the Taliban), saw swathes of northern Afghanistan—where ethnic Uzbeks and Tajiks who historically opposed the Taliban far outnumber the Pashtuns from which the Taliban emerged—ally with the group for the first time.

The failure to withdraw over the last decade only made it more likely the Taliban would win. An extension of the occupation may well have risked passing the advantage from the Taliban to the Islamic State. Nevertheless, delaying the reality of the United States’ loss—and the cruel images that accompanied it—appears to have been the only motivating factor for the U.S. presence in Afghanistan in recent years.

Biden’s steadfast defense of the withdrawal is more than an acknowledgment that Washington should not be fighting wars that do not promote U.S. strategic interests. It is a recognition that war—in that famous Shibboleth, “the continuation of politics by other means”—prohibits the advancement of politics by non-military means.

As Biden said following its completion, the withdrawal “is not just about Afghanistan. It’s about ending an era of major military operations to remake other countries.”

Recognizing the Taliban’s victory decreases the risk Afghanistan will again become a launching pad for terror against the West. It may be too much to hope it will alleviate Afghanistan’s internal divides and the violence that so often accompanies them, but there too the war had long failed.

To invoke Benjamin Disraeli “War is never a solution; it is an aggravation.”

Maximilian Hess is a Central Asia Fellow in the Eurasia Program at the Foreign Policy Research Institute. Max is also the Head of Political Risk at Hawthorn Advisors, a London-based strategic communications and consultancy firm. He is a graduate of Franklin & Marshall College and SOAS, University of London.