Why America Is Signaling Its Willingness to Talk to Iran 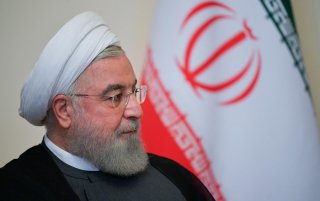 If a person listens to what both sides say, then the United States and Iran are at loggerheads, each striking the opposite position of the other. Iran’s Supreme Leader Ayatollah Ali Khamenei stated that the United States “must lift all sanctions in practice” before Iran will return to the commitments it made as part of the nuclear deal. President Joe Biden holds that the United States will not eliminate the sanctions against Iran unless Iran ceases enriching uranium. Actually, both are very interested in the same thing: in first talking about talks, and then negotiating some more.

The United States is committed to not letting Iran develop a nuclear weapon. However, if sanctions do not work and Iran continues to enrich more and more uranium, making a material that can be used in a nuclear weapon, then the United States would have to use force to put a stop to it. There are few things the Biden administration is less inclined to do than to engage in another war in the Middle East. As it is, the administration faces a very long list of challenges, including dealing with the pandemic and reviving the economy, addressing climate change, and responding to demands for social justice. Dedicating resources to a war in the Middle East will reduce the resources that are available for domestic purposes. The wars in Afghanistan and Iraq cost trillions. Recent armed interventions carried out by the United States have resulted in immense bloodshed and the United States has extremely little to show for these drives. In effect, they demonstrated that the United States is weak, in alliance with corrupt governments, ones that make short shrift of individual rights and that are increasingly leaning toward Iran. In short, the Biden administration has strong reasons to seek to avoid war with Iran.

How to square the circle, how to avoid facing the harsh choice between war and ignoring Iran’s looming nukes? Let’s negotiate and report progress and talk some more.

The Biden administration, in its first weeks, took several steps that Iran will view as an indication that Biden is very keen to avoid a confrontation and to talk instead. It stopped helping the Saudis in the fight against the Houthis, a force supported by Iran and widely considered its “proxy.” It removed the Houthis from the list of terrorist organizations. It appointed Robert Malley as the envoy for Iran. Malley is widely known as an “advocate for engaging with groups and governments,” including those that are enemies of the United States and its allies. Critics contend, however, that he is “overly sympathetic to foreign actors including Iran.” (Last year, he floated the idea that the United States might coax Iran to the negotiating table by removing its objection to Iran getting a coronavirus-related loan from the IMF.) The United States removed the aircraft carrier Nimitz from the region. The Biden administration did not respond to a report that Iran has engaged in undeclared nuclear activities or to attacks by Iran-backed militias in Iraq. When Biden made his first major foreign policy speech since taking office, he “pledg[ed] to confront human rights abuses, tyranny and intolerance in China, Russia, Myanmar and elsewhere while seeking cooperation with competitors where possible.” However, Iran escaped the list. The Biden administration has announced that it is reviewing arms deals with the United Arab Emirates (UAE). The UAE is allied with Iran’s opponents. Each of these moves is motivated by complicated reasons, however, together they are likely to be read by Iran that the Biden administration is very keen to avoid a confrontation and hence make at least some concessions and surely be keen to talk and talk.

Preparing the public for what is to come, the new secretary of state, Antony Blinken, stated, “Iran is out of compliance on a number of fronts. And it would take some time, should it make the decision to do so, for it to come back into compliance and time for us then to assess whether it was meeting its obligations.” The Biden administration’s commitment to coordinate with the EU and Russia also will slow things down and moderate the U.S. position, because these parties are keen to do business with Iran and are not keen to confront it. Fareed Zakaria put it simply, holding that the Biden administration’s position that Iran must be back in compliance with the agreements of the Joint Comprehensive Plan of Action (JCPOA) before the US can rejoin the deal is “largely a tactic to avoid confronting the issue.”

Iran saw what happened to Libya after it gave up its nascent program to develop weapons of mass destruction, as well as what happened to Ukraine after it gave up its nukes and was invaded by Russia, neither of which compares favorably to the treatment North Korea receives on the world stage. No wonder Iran seeks to develop nukes—but without incurring the risk of a war.

Iran is eager to have the sanctions lifted. It can hope that some promises it may make during the negotiations will get the Biden administration to ease off on some of the sanctions that harm its economy. Above all, Iran is keen to negotiate in order to buy time. Some hold that Iran is mere months away from being able to put together a nuclear bomb (although a recent Israeli intelligence report argues that it will take two years). Nobody can make such predictions with any assurance. However, whatever the timeline, for Iran, any month that passes while “negotiating” allows it to move closer to developing nukes. Iran already has demonstrated that it has very reliable delivery systems. In September 2019, its drones and missiles hit very specific and valuable equipment and storage tanks at Abqaiq and Khurais, crucial petroleum processing sites and oil fields in Saudi Arabia. Iran is free to develop its missiles so that they will be able to carry nuclear weapons because missiles are not covered by the JCPOA and they are not on the agenda for the upcoming negotiations.

Predictions are a very hazardous business. How many people predicted that Trump would win the 2016 elections? That said, I predict that America and Iran shall see prolonged negotiations, with many ups and downs, that will not resolve the issue. Both countries, each for its own reasons, has a strong interest in talking. One to cover up its inaction, the other to cover up its action.