Why the Coronavirus Can’t Kill the American Spirit 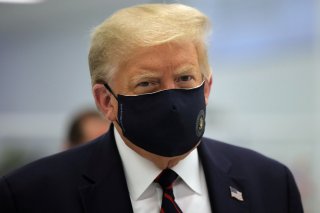 Like many around the world, I awoke to the news of President Donald Trump’s infection and hospitalization with coronavirus with shock and dismay. I was shocked that no amount of medical access or expertise could shield the president from this terrible pestilence. I was dismayed that the pull of political partisanship has led so many Americans, on social media and elsewhere, to wish an ill fate on their head of state.

One could be forgiven for calling to mind the words of another president, spoken in another hour of darkness and strife: “though passion may have strained, it must not break our bonds of affection. The mystic chords of memory will swell when again touched, as surely they will be, by the better angels of our nature.”

And indeed, as if to vindicate Abraham Lincoln’s noble assessment of his fellow Americans, several leading Democrats rushed to offer Trump fulsome wishes for his health and recovery. As he has often done, former President Barack Obama led the way, saying: “Although we are in the midst of a big political fight, and we take that very seriously, we also want to extend our best wishes to the president of the United States [and] the first lady.” Obama encouraged his followers to “remember that even when we’re in the midst of big political battles with issues that have a lot at stake, that we’re all Americans and we're all human beings—and we want to make sure everybody is healthy.”

Likewise, Vice President Joe Biden exhorted Democrats that “This cannot be a partisan moment. It must be an American moment,” and going to send “my prayers for the health and safety of the first lady and the president of the United States . . . My wife Jill and I pray that they'll make a quick and full recovery.” I do not know if Obama and Biden see themselves in Lincoln’s summons to the better angels of America’s nature. But as someone who has always counted himself as one of America’s friends and admirers, I am grateful to them for echoing a call that has never been more needed.

I hail from the Arab world, wide swathes of which have been torn apart over the past decade. While historians will debate the causes of the Arab Spring’s rise and fall, few would contest that the tragedies which befell Syria, Libya, Yemen, and elsewhere could not have come to pass but for the exclusionary, zero-sum political culture—in which rival factions relentlessly demonized and dehumanized one another—which had taken root in many Arab lands. We Arabs know all too well what costs a nation must bear when her people forget a simple truth: that all citizens are partners; they rise and fall together.

America is not just one country among many. It is the world’s leading economic and military power. The liberal democratic world still largely looks to it for leadership. And today’s world is rocked by challenges that call for leadership. The coronavirus pandemic, and the attendant humanitarian and economic catastrophes that have come in its wake, is only the most salient of these.

The rising power of an authoritarian China is likewise a challenge of the first order. Though China is a nation with rich and storied traditions, its recent behavior on the world stage should give all those who claim to seek a post-American future pause. From the harsh suppression of the Uyghur Muslim people to the costly dissembling over the release and spread of the coronavirus, it is clear that storm clouds are gathering on the horizon. While many nations are uneasy about Beijing’s recent behavior, only America can organize a coalition to meet and contain the danger.

For all these reasons and more, I wish Trump and America a speedy recovery from the scourge of the coronavirus. It is my prayer that this nation, buoyed by the warm wishes of countless friends abroad, will recall the better angels of its nature and pull together to meet the challenges of today, just as it always has in the past. It is my expectation that it will surely do so.