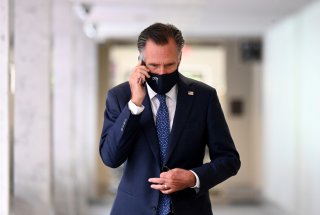 Former President George W. Bush has decided that the recently concluded presidential election went well. In a statement announcing a cordial phone call he had with Joe Biden, he asserted: “The American people can have confidence that this election was fundamentally fair, its integrity will be upheld, and its outcome is clear.”

But tens of millions of Americans believe the election was anything but “fundamentally fair.” Bush’s words bring to mind George Orwell’s observation that modern political language “is designed to make lies sound truthful and murder respectable, and to give an appearance of solidity to pure wind.”

Bush, who left office as one of America’s least popular presidents, heads the political family whose chief expertise is losing with dignity. He’s not the only establishment Republican who is eager to pretend Joe Biden was legitimately elected and assume that normalcy will return under his reign.

Sen. Mitt Romney (R-Utah) scolded President Donald Trump for not instantly accepting defeat, which was reported by the media. He said Trump’s concerns about voter fraud, “damages the cause of freedom here and around the world, weakens institutions that lie at the foundation of the Republic, and recklessly inflames destructive and dangerous passions.”

Let me get this straight. We just had a campaign during which progressives again labeled Trump and all who voted for him as racist and therefore illegitimate. Biden’s supporters are compiling blacklists of Trump supporters whom they believe should face scorn and poverty for their sins. The media and pollsters appear to have been turned into brazen lapdogs for the one political party. Big tech assures us that it cancels people to augment our “safety,” but somehow only censors conservatives—including the president of the United States and one of America’s oldest newspapers.

Romney is not the only one engaged in preemptive capitulation. Sen. Lindsey Graham (R-S.C.), promised reporters that, “When it comes to finding common ground, I will do that. The [former] vice president deserves a cabinet.” The implication is that even if Republicans still control the Senate by winning Georgia’s two upcoming runoff elections, Biden and his fellow Democrats have nothing to fear when it comes to confirming their nominees and implementing their takeover of the executive branch.

Where has Graham been for the last four years? On their way out the door in 2016, Biden, as vice president, and President Barack Obama tried to frame the incoming president and his top aides for offenses they knew to be false. Most Democrats opposed every single important Trump nominee to his cabinet. Senate Democrats forced Majority Leader Mitch McConnell to waste hours of floor time on many of the twelve hundred Senate-confirmed political appointments needed to fill an administration—meaning that many were never filled.

Character assassination, a Beltway special previously reserved for conservative Supreme Court nominees and the occasional cabinet nominee, was extended far and wide. House Democrats impeached President Trump for alleged corruption in a phone call with a Ukrainian leader, even though the transcript of that call proved him innocent. And a special prosecutor tried his best to take down Trump, failed, but managed to destroy plenty of careers and distract Washington for more than two years.

Further slights to democracy have included Democrat proposals to pack the Supreme Court by adding justices, pack the Senate by adding states, and pack voter rolls by giving citizenship to millions of illegal aliens.

Surely Graham saw this. His nearly nightly appearances on cable news place him in Washington during this time. Wikipedia indicates he even ran the Judiciary Committee for part of this period. What in this museum of treachery against the duly elected president of the United States makes him think that Democrats now deserve comity or will interpret it as anything other than weakness and surrender?

I have a better idea if these people actually want to do what is best for democracy and the Republic: treat Biden as an illegitimate president. First, Republicans need to get to the bottom of what went wrong in the election. They need to highlight how political machines in Democrat cities like Philadelphia have a history of stuffing ballot boxes and propose a new voting rights act to end this practice.

They must also demonstrate how mass mailing of ballots to deeply flawed voter rolls lent itself to fraud—preferably before the same technique allows Democrats to steal the two Senate seats from Georgia. Then they need to scrutinize and delay Biden nominees, highlighting for America that they are part of an elite that cares for itself more than the country. Biden family corruption should be spotlighted right along with media and big-tech corruption—starting with demands to indict Hunter Biden for illegal lobbying of the “Big Guy” and Twitter’s Jack Dorsey for lying to Congress when he said they don’t target conservatives.

Put simply, now is a time for Republicans to fight, not surrender. Their supporters expect them to defend their rights if nothing else, and to try to achieve something rather than going along to get along.

Christian Whiton was a senior advisor in the Trump and George W. Bush administrations.