The Donald Trump Tragedy Is Nearly Over 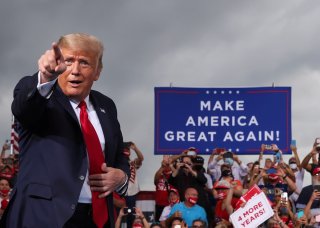 Joe Biden has won. The Republicans appear likely to retain control of the Senate; they also have eaten into the Democratic majority in the House of Representatives. For Americans who desperately seek stability, there could not be a better outcome.

Biden is not a socialist, as Donald Trump alleges. Nor does he favor, or is a favorite of, the extreme left-wing of the Democratic Party. Were the Democrats to pull off a miracle and take over the Senate, for example, if they were to take both Georgia seats should both be contested in that state’s January 11 run-off election, which together with the vice president’s tiebreaker vote would give them a majority, Biden would be unable to prevent a sharp lurch to the Left. He would become a hostage to “the squad” and other extreme progressives in the House and have to cope with Bernie Sanders as chairman of the Senate Budget Committee. It is an unenticing prospect for the vast majority of Americans, and probably for Biden too.

On the other hand, a Republican majority Senate, with Kentucky’s Mitch McConnell returning as majority leader, would serve as a backstop against the more wild-eyed, high-cost proposals that Bernie Sanders, “the squad” and their fellow travelers might offer. Biden could tell his more progressive supporters that he could not do more than extort a compromise from McConnell.

The majority leader could pitch the same message to those elements of his own party who hanker after unvarnished Trumpism, be it border walls, further restrictions on immigration, or legislation to undermine the Affordable Care Act. The result of the separate posturing by Biden and McConnell could be deadlock. On the other hand, it could also lead to compromises that might include dealing with the pandemic; responses to China’s theft of intellectual property; immigration reform including writing DACA into law; infrastructure modernization; and the renaming of military facilities currently bearing the names of Confederate officers. To anticipate compromise is not a drug-infused hallucination. After all, Biden and McConnell were colleagues in the Senate for over three decades and both are not strangers to reaching across the political aisle. Moreover, and importantly, and there is little evidence of any personal animosity between them. Indeed, they co-sponsored several bills in the Senate and in 2012 negotiated the extension of most of the 2000 tax cuts that were due to expire, a deal that exasperated the Democratic progressives.

Donald Trump continues to refuse to concede defeat; he claims the election is rigged and points to Biden’s margins in what he terms “corrupt” democratic cities. He clings desperately to the safety that the White House affords him. Once he leaves office, he will be vulnerable to certain indictment in New York for tax fraud and other criminal violations.

Trump will rail against his enemies and against standard election procedures. He will pursue a scorched earth policy to the very end. He will press lawsuits as far up the judicial chain as he possibly can. He will issue a flurry of executive orders that reflect the most extreme position that his supporters can conjure up. He will veto any legislation that is put before him. And he will refuse to permit anyone to cooperate with the incoming transition team.

His four years in office have exhausted the nation. Even Republican legislators are already beginning to back away from him. Hopefully, sooner rather than later, the country will as well.