Why Justin Trudeau’s Canada Is So Soft on China 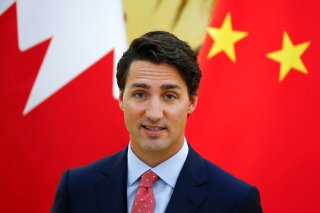 Despite repeated calls from the Biden administration, the Canadian government of Prime Minister Justin Trudeau has yet to formulate a public foreign policy strategy to deal with China. Canada has the world’s ninth-largest economy, a population of nearly forty million, a major Pacific Ocean coastline, and fully benefits from the U.S. missile defense architecture, to which it makes no contribution. Yet it is a disappointingly meek U.S. ally. Ottawa has been pursuing a virtually neutralist strategy of avoiding committing to any U.S. effort to harness the coalition of democracies to confront the Chinese threat to Taiwan. Washington needs to be aware that any Canadian foreign policy on China will be heavily influenced by domestic electoral politics.

The strategic polarization in Asia between communist China and the world’s democracies on the issues of maritime sovereignty, human rights, and the integrity of Taiwan is complicated by the diversity of interests typical of immigrant societies in democracies. There are 1.8 million Chinese-Canadians (5.13 percent of the population), of which about 72 percent are foreign-born, with diverse histories and origins, participating across every political platform. By comparison, there are 5.4 million Chinese-Americans (1.5 percent of the population), of which 3 million are Chinese-born and 100,000 Taiwanese-born. Consequently, Ottawa is at least three times more sensitive to the foreign policy preferences of recent Chinese immigrants than Washington. The current Liberal Party government of Justin Trudeau is torn between immediate U.S. pressure to articulate a coherent China policy (meaning anti-China) and electoral imperatives.

The Chinese Canadian community is predictably divided over the issue of the rights crackdown in Hong Kong, with opinion largely based on whether an individual descended from Hong Kong or mainland China. In a survey, 53 percent of Chinese-Canadians said that the Chinese government could not be trusted, while 40 percent of respondents disagreed with that statement. Obviously, this puts a large proportion of the Chinese community in disagreement with the majority Canadian view that Beijing is not trustworthy. 73 percent of Canadians see China unfavorably after Beijing’s state kidnapping of Canadian citizens. In the 2021 elections, reacting against Party Leader O’Toole’s anti-Beijing policy, the traditionally Conservative-voting Chinese urban electorate shifted to 43 percent support for the left-centrist Liberals and 24 percent support for the leftist New Democratic Party. Even among Cantonese, there was a concern that a tougher stance would imperil business links and the safety of families back on the mainland. The Conservatives also learned that, because of cultural nationalism among the Chinese community, election slogans that attempted to distinguish between Chinese-Canadians and the Chinese government failed. Slogans of defending democracy by coming to the aid of Taiwan are unpopular in large segments of the Chinese-Canadian community. There is a genuine feeling in the community that there is a coordinated Western effort to undermine China’s rise by leveraging human rights, and that China shares this fate with Russia and Iran.

These foreign policy divisions within the Chinese-Canadian community are evident in the university campus disruptions at McMaster University, the University of Toronto, and elsewhere over the issues of the treatment of the Uighurs, Hong Kong, and Taiwan. While these events demonstrate incontrovertible evidence of some coordination and encouragement of Chinese foreign students (of which there were 150,000 in Canada in 2019) by Chinese consular staff, they also exhibit sentiments typical among recent Chinese immigrants. An Amnesty International report has wrongly attributed these pro-Beijing sentiments almost entirely to foreign students. Similarly, Canada’s internal security services have voiced their concern that China has infiltrated different levels of government and is in a position to influence public opinion, public policy, and elections. There have been calls to investigate Chinese government interference in some ridings of the 2021 elections. There are of course no arrests or convictions, as all three sets of accusations have failed to appreciate the shifting foreign policy preferences of Canada’s recent Chinese immigrant community, which is the principal driver.

83 percent of ethnic Chinese-Canadians in Toronto and Vancouver are immigrants and live in communities—Richmond Hill, Markham, and Richmond—with sufficient critical mass that Chinese is the daily language of business. This isolation, and the fact that only half of Chinese immigrants are fluent in English, may foster identification with policies closer to Beijing than Ottawa. Canada’s multicultural approach to immigrant integration has created a predictable mosaic of incompatible foreign policies. Even if all immigrants to Canada were assessed on values (they are not), it would not solve the problem of loyalties to countries of origin, which typically take at least three generations to fade. In the field of foreign policy studies, it is well known that there is no deductive way to determine a country’s natural national interest. The bigger issue is that since all foreign policies are to some extent ethnically determined and have to do with sympathies to countries of origin, Canada’s different immigration patterns will naturally shift its foreign policy. A concern is that Ottawa will need to navigate this shift in order not to compromise its current alliance relationships.

Chinese nationalism is complex. Much of it has to do with the sense of vulnerability instilled by the Japanese invasions at the beginning of the twentieth century. Mainland Chinese textbooks only started to emphasize nationalism and Japanese war atrocities after the June 4 Incident (the Tiananmen Square massacre), which decidedly undermined the legitimacy of formal Communist ideology. The “century of humiliation,” as taught in Chinese textbooks, focuses on the unequal treaties imposed by the Europeans, but there is also a sense of submerged humiliation that has to do with the Manchu domination of China until 1911. Even had Mao Zedong and the Communists been defeated in 1949, a victorious Kuomintang government in Beijing would have occupied Tibet, sought to neutralize Korea, demanded a return of the Amur region held by Russia, grappled with Uighur secessionism in Xinjiang, insisted on the possession of Taiwan and the South China Sea, demanded a return of the Ryukyu archipelago from Japan, built nuclear weapons and a blue water fleet, established a predatorial trade system, and preferred an authoritarian, or at least an illiberal democratic, system of governance. Perhaps there would not have been a military intervention in Korea in 1950, the 1954 and 1958 crises in the Taiwan Straits, or the 1969 border war with the Soviet Union, but there would still likely have been the 1962 attack on India and the 1974 and 1979 invasions of Vietnamese territory. So a collapse of the Communist government in Beijing, and even a popular revolt that sees China becoming democratic, will not lead to a lessening of these territorial claims. Many in Hong Kong support these demands, despite their separate dispute over liberal self-governance. Taiwan does not, as approximately half of the mainland Kuomintang Chinese have returned to China, many settling in cities like Suzhou.

Proportionally, Australia has an even larger Chinese community than Canada (numbering 1.4 million), at 5.5 percent of the total population, of which half were born in mainland China. Yet Australia has taken a principled and determined stand against Communist Chinese aggression in the Pacific littoral. The key difference is the amorphous impact of the absence of political will in Ottawa. Traditional anti-American sentiment in the Canadian Liberal party, combined with the incentives of alienating Canada’s Chinese community from voting for the Conservative Party, is just enough incentive to sap courage out of Justin Trudeau’s China policy. Washington policymakers need to remind Ottawa of its place in North America and within the community of democratic trading states, especially its legal and moral obligations to that community.

Dr. Julian Spencer-Churchill is associate professor of international relations at Concordia University, author of Militarization and War (2007) and of Strategic Nuclear Sharing (2014), and a former operations officer, 3 Field Engineer Regiment. He has published extensively on security issues and arms control and completed research contracts at the Office of Treaty Verification at the Office of the Secretary of the Navy, and the then Ballistic Missile Defense Office (BMDO).