Why Russia Is Turning the Arctic Region into an Economic Catastrophe 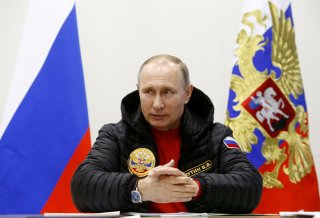 Last week’s spill of twenty thousand tons of diesel fuel from the Arctic Russian town of Norilsk is only the most recent in a series of environmental, humanitarian, and economic catastrophes that Russia will not be able to handle on its own. The calamity is twofold since it was thawing permafrost—a separate problem—which caused one of the fuel tank’s pillars to collapse. The diesel leaked seven miles from the site, turning a local river blood red. While the spill doesn’t reach the thirty-seven-million-ton level of the 1989 Exxon Valdez disaster with which it has been compared, its insidious underlying cause is more worrying. And because it touches on far-reaching environmental problems across the Arctic region, it becomes a transnational political problem too.

To be sure, Russian president Vladimir Putin declared a state of emergency, detained the plant manager, and expressed sufficient outrage. It is harder to muster surprise though. Environmental catastrophes in Russia’s Arctic are longstanding, and an earlier spill in 2016 from an overflowing filtration dam at the same plant polluted another river. Norilsk is the worst of a bad lot, officially acknowledged as Russia’s most polluted city. Its Soviet-era industrial plants spew two million tons of gas into the atmosphere each year, and NASA says this city, with its relatively small population of 180,000, is responsible for one percent of the world’s sulfur-dioxide emissions. The surrounding moonscape, twice the size of Rhode Island, is devoid of trees because of unremitting acid rain and smog. Life expectancy is ten years lower than in Moscow; the cancer rate is twice as high as the rest of Russia. Norilsk was an environmental disaster zone long before the ground under it began to thaw.

Norilsk is just one of Russia’s Arctic cities on the front lines of climate change. Others, such as Vorkuta, Tiksi, Magadan, and Murmansk, have also suffered infrastructure damage, severe population decline, pollution, lack of infrastructure investment, and isolation from what inhabits call “mainland” Russia, along with a lack of hope that Soviet-era thinking about so-called “mono-cities” will ever change.

Norilsk is a good example of all that’s wrong with Russia’s Arctic. It lies in a valuable region with the world’s largest deposits of nickel and palladium, along with sizeable deposits of copper, cobalt, platinum, and coal. But it is burdened with a gulag legacy, built in the 1930s with prison labor. Norilsk is also a “closed” city, a carryover from Soviet days when dozens of cities were deemed strategic because of military bases or industrial assets. The closure is hard to justify in modern times given that the town’s only company, Norilsk Nickel, was privatized back in 1997.

Norilsk, like many other cities in the Arctic, was built on permafrost. As many as 60 percent of the buildings in Norilsk are collapsing atop softening permafrost, and 10 percent have been declared uninhabitable. Norilsk is not alone. Across Arctic Russia, the economic loss of structures lost to thawing permafrost is estimated at more than $2 billion a year. Long after the diesel fuel is contained, the greater threat from thawing permafrost, which present problems far more difficult to solve, will continue.

Europeans are used to coping with Russia’s environmental problems. Norway has been quietly helping Russia to safely dispose of Soviet-era submarine nuclear waste since the 1990s, using its own technology to devise a plan to reach twenty-two thousand spent nuclear fuel elements along with thousands of meters of solid and liquid radioactive waste, some of which is stored outdoors in rusty containers. Italy paid for a purpose-designed ship. This year, when Russia cried poor, Norway began footing the bill, rationalizing that it gave it more insight into the ultimate disposition of the waste, which moves by rail to a reprocessing plant east of the Urals.

Russia may prefer to cheer itself with the prospects of the economic benefits of a melting Arctic Ocean as it develops its Northern Sea Route and LNG terminals, largely financed by China. Likewise, it casts its Arctic military build-up in a triumphal patriotic light. Why deal with hard-to-solve environmental problems with you can put out a “Russia is Back” narrative? And why help a country that seems truculent and bellicose?

The answer lies in the tendency for environmental problems to cross borders, and the solution lies in the Arctic community of nations, a group that includes the United States. There is precedent for collaborating. The 1986 Chernobyl disaster prompted the international community to create a forum in which to work cooperatively through Arctic environmental crises. Finland, alarmed by the damage to its northern forests from Soviet smelters, took the lead. That forum gradually evolved into the Arctic Council, a unique body that includes all eight Arctic states, including Russia, which is due to assume the rotating two-year chair in 2021.

The Arctic Council is one of the very few places not bound by sanctions following Russia’s invasion of Crimea and eastern Ukraine in 2014. There are smaller and more specialized Arctic groups as well, and this new disaster proves the necessity for keeping lines of communication open even during difficult times. The next spill might touch shores that are not Russian. Putting mechanisms in place before the next crisis is obviously preferable.

The largest lessons, of course, are for Russia. The Norilsk diesel spill will be difficult to manage. The river involved is shallow and there are no roads to help workers in and out of the region, partly because of the sparse population and partly because of Norilsk’s longstanding stature as a closed city. The world (and Putin) learned about the spill through social-media posts after plant operators tried to cope with it on their own. Russian transparency, corporate accountability, and consideration for the Arctic’s fragile ecosystems are all long overdue.

Melting ice in the Arctic Ocean and thawing permafrost in Arctic lands have created shared problems among all Arctic states. That said, Russia has by far the largest Arctic population, the worst infrastructure, and the most to lose from warming temperatures. Nearly half of its oil and gas fields lie in regions where thawing permafrost will continue to cause severe damage to buildings, roads and industry. One thing is clear: this will not be the last of Russia’s Arctic accidents.

Mary Thompson-Jones is a professor and chair of Women in National Security and Diplomacy at the U.S. Naval War College. The views here are her own.