Why Taiwan Continues to Fear a Chinese Invasion 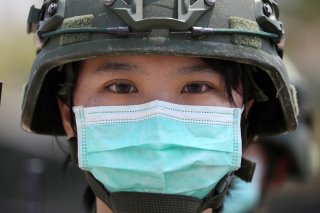 Recently, Taiwan has been under the spotlight in international media for three main events: passing a same-sex marriage act in May 2019, Tsai winning a reelection in January 2020, and the outstanding performance in fighting the coronavirus pandemic. The statehood of Taiwan, however, is not as clear as the above achievements. While numerous international media outlets tend to Taiwan as a self-ruled island-state, others often avoid using the term “country” to describe Taiwan due to the chagrin of Beijing. The duality of reporting exemplifies the dilemma of Taiwan’s statehood.

While journalists worldwide often associate the sitting president of Taiwan, Tsai Ing-Wen, with political stances that advocate for Taiwan’s de jure independence, that tendency is problematic. For starters, the goal of the Tsai administration has always been maintaining the status quo across the Strait. Second, Tsai’s pro-status-quo attitudes are clear when compared to other political parties and political groups in Taiwan that take on more extreme positions such as holding an independence referendum immediately, or supporting and promoting Beijing’s unification and one-country-two-system rhetoric in Taiwan.

As a result, compared to Ma, Tsai is hardly pro-status-quo, as she does not insist on the name, “Republic of China” during her presidency. For example, in an op-ed published by Time magazine, she used the title “the President of Taiwan” when sharing the country’s experience of combating the coronavirus. Similarly, in December 2018, all Taiwan’s embassies in other countries added “Taiwan” to their names on Facebook. These incidents suggest that Tsai is not precisely a pro-status figure.

Thus, it might be more accurate to label Tsai and DPP as “pro-sovereignty” stance.

You might ask, does Taiwan not already obtain sovereignty? The answer to this question can be yes and no.

It is true that Taiwan has hit some of the marks of state sovereignty, those are territory, population, authority, and recognition. Taiwan has a population of about twenty-four million and maintained effective control of the defined territory of Taiwan, Penghu, Kinmen, and Matsu with the recognition of fifteen diplomatic allies. These areas are controlled by the government in Taiwan that has an independent legislature, military, and taxation systems.

Taiwan as an independent state entity, however, is not immune from threats of external intervention from China. Attempts of changing Taiwan’s constitution, for example, would often guarantee interventions through non-peaceful means by China. Taiwan’s situation stands in sharp contrast with other countries unencumbered by such worries. Dutch government rebranding itself as Netherland; the Philippines advocating to change its name to Maharlika, and Northern Macedonia changing its name despite of Greek’s pressure are all cases in point. A complete autonomy of constitutional amendments in Taiwan is simply constrained by Beijing’s One China Doctrine.

The time when both sides agree on the status quo as the modus operandi of cross-Strait relations has passed. In recent years, China has actively been altering the status quo on its end with actions such as poaching Taiwan’s allies, infringing on Taiwan’s airspace during the global pandemic, and isolating Taiwan from the international community. Moreover, PRC chairman Xi openly equates One Country Two Systems with the 1992 Consensus in early 2019, eliminating any room for the hope of “different interpretations” embraced by KMT and other such supporters in Taiwan.

The status quo is an ambiguous concept, and by far, China’s goals has been to change the status quo unilaterally without taking the will of Taiwanese people into consideration, Tsai devotes her presidency to prevent Taiwan’s sovereignty from sliding. In doing so, she implemented several substantial policies including building of a domestic submarine since 2017, improving the welfare of the military, and purchasing F16V fighter jets from the United States. Tsai’s latest effort is implementing the Anti-infiltration Act to block Chinese infiltration into the Taiwanese society.

Whereas observers of Taiwan’s politics might find it difficult to distinguish the stances between pro-sovereignty and pro-status quo, citizens in Taiwan often have no difficulties grasping the nuance. China’s aggressive tactics at thwarting Taiwan’s sovereignty has backfired⁠—as more citizens in Taiwan realize that when the stance of the status quo is untenable, more have shifted their position to supporting independence. A long-term trend of public attitudes toward unification-independence showed that the position of “moving toward independence in the future” hit its all-time-high in 2019, reaching 21 percent.

However, Taiwan’s citizens are acutely aware that moving toward independence swiftly might invite a Chinese military invasion. As a result, even when support for the independence movement is highest in history now, “maintaining the status quo forever” and “decide later” still has over 50 percent of the support among the public. Another survey results also showed that the public understands that the status quo is a choice of convenience, in which more than 60.3 percent of the respondents opposed Taiwan's independence if it is followed by China’s military invasion. The number drops to 26.6 percent if China will not use armed force to attack in a hypothetical scenario.

In short, people who live in Taiwan support the status quo because they are afraid of a military invasion from China. But they are likely to switch their stance to supporting independence when China no longer poses a threat. The public understands Tsai’s efforts at defending Taiwan’s sovereignty (even when the public is more likely to choose status-quo in a survey), which is reflected in her approval⁠—for the first time in DPP history, more people in Taiwan think that Tsai was handling the cross-Strait relations well compared to those who disagreed (46 percent vs. 36 percent, NCCU telephone survey, one month before the 2020 presidential election). Her stance of defending Taiwan’s sovereignty against Beijing’s coercion was publicized in the 2020 Taiwan’s presidential election, and led to the record-high votes approved by the people of Taiwan.

Thus, it is incorrect to describe Tsai as either pro-status quo or pro-independence. Some scholars argue that Tsai’s pro-sovereignty mindset and policies, which have been seen as a direction of seeking independence by China, should be described as a form of “anti-annexation.” This is by far the best and most accurate approach to describe Tsai’s stance on cross-Strait relations.