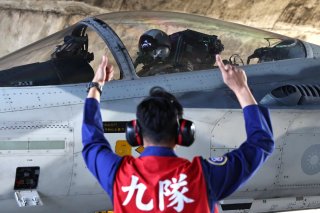 Despite President Volodymyr Zelenskyy’s plea for calm, a Russian invasion of Ukraine may still occur. However, while Russian president Vladimir Putin has upped the ante by massing troops on the country’s eastern and northern fronts, many commentators argue that, if the United States does not react forcefully to Russian aggression, what happens in eastern Ukraine could be a harbinger of what Taiwan faces in the future.

A Russian invasion of Ukraine actually has little to say about Taiwan’s future because the Ukraine-Taiwan analogy rests on several assumptions that do not hold up under scrutiny. First and foremost, the comparison assumes that Chinese president Xi Jinping would interpret U.S. inaction in Ukraine as reflective of a broader American unwillingness to commit to any foreign intervention.

Certainly, much like other world leaders have learned from international events, China too could take lessons from a Russian invasion of Ukraine. Consider Libya’s relinquishment of its nuclear program as an example. Both North Korea and Iran learned from Libya’s case that disarmament in exchange for economic concessions is not worth it. There are not many alternative lessons for leaders in other rogue states to understand other than that giving up nuclear weapons undermines their own security and survival.

Analyzing the United States’ relative passivity in dealing with the threat posed to Ukraine is much more complex and there are more lessons for Xi to learn. For example, is the U.S. decision to not commit to Ukraine’s defense simply because Ukraine is not a NATO member, and if so, does that also mean that the United States will not defend Taiwan because it is not a formal treaty ally? However, this reasoning assumes that the strategic importance of Ukraine and Taiwan are the same, which is debatable given the U.S. strategic focus in the Indo-Pacific to contain China.

Or does the United States want to use the threat to Ukraine as an opportunity to test NATO’s resolve, and perhaps it will still intervene in the end if  Russia invades? Or, could the Biden administration’s experience of withdrawing from Afghanistan have removed any appetite for foreign interventions? Any of these interpretations could result in dramatically different lessons for Xi. As of now, the world has not settled on what the most convincing explanation is. Certainly, Xi could learn from the ongoing crisis over Ukraine, but it is unclear how he will make sense of it, and a miscalculation will cause irreversible consequences.

Subsequently, what happens if a leader learns lessons that run counter to their previous knowledge? Would that leader now be constrained by motivated reasoning, or would a new decision trump prior beliefs? The answer is clearer when the leader is, for instance, trying to develop nuclear weapons for the first time. This is not the case for Xi when it comes to thinking about Taiwan. Historically, the United States has intervened in cross-Strait wars three times, once by sailing an aircraft carrier battle group through the Taiwan Strait. If Xi learns from the Ukraine crisis that a U.S. intervention is unlikely, it is unclear how he could reconcile the differences between this incident and all the other historical precedents related to Taiwan.

We are not suggesting that a Chinese invasion of Taiwan could never happen. A leader does not make foreign policy decisions in a vacuum, even in authoritarian regimes. There is a slew of variables that could influence Xi’s decisionmaking, ranging from domestic politics and divisions in the Chinese Communist Party (CCP) to economic expectations and even his personality. World events are notoriously unpredictable. What we are suggesting here is that believing China could invade Taiwan because the United States does not react to Ukraine is premature and unproductive war-mongering. A simple analogy is insufficient, and additional factors need to be considered in weighing this particular consideration. There is no denying the strategic importance of Taiwan given its favorable strategic location for U.S. naval power projection, leadership in global semiconductor manufacturing, and central role in the emerging new Cold War between the United States and China.

Charles K. S. Wu is an Assistant Professor of Political Science at the University of South Alabama.

Yao-Yuan Yeh is Chair and Associate Professor in the Department of International Studies & Modern Languages at the University of St Thomas, Houston.

Fang-Yu Chen is an Assistant Professor of Political Science at Soochow University, Taiwan.

Austin Horng-En Wang is an Assistant Professor of Political Science at the University of Nevada, Las Vegas.