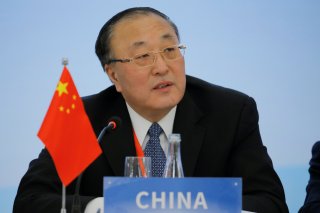 At a May 7 virtual meeting of the UN Security Council that addressed the theme of “upholding multilateralism,” Secretary of State Antony Blinken, Chinese Foreign Minister Wang Yi, and Russian Foreign Minister Sergei Lavrov all delivered speeches that dutifully and eloquently invoked the UN Charter and its emphasis on international law, human rights, and the “sovereign equality” of all member states. All three men embraced the vital importance of multilateralism in addressing global challenges.

Their agreement largely ended there, as it soon became apparent that those words mean different things to Washington than they do to Beijing and Moscow.  Much of the divergence became apparent when Blinken asserted that “attacks against the rules-based order are intensifying” and reaffirmed that a core foreign policy objective of the Biden administration is to “defend, uphold, and revitalize that [rules-based] order.”

Wang’s remarks on this subject could have been summarized as “What rules? Whose rules?” He observed that “international rules must be based on international law, and must be written by all.” This echoed comments by Chinese Politburo member—and Beijing’s top diplomat—Yang Jiechi during the meeting he and Wang had in Anchorage in March with Blinken and U.S. National Security Advisor Jake Sullivan, when Yang declared that “most countries of the world do not recognize that the rules formulated by a few countries represent international rules.”

At the May 7 council meeting, Lavrov reiterated Wang’s point even more emphatically.  He accused Washington of generating “the concept of the rules-based order . . . as a substitute for international law”—which, according to Lavrov, already exists as “a body of rules” that has been forged “at universal platforms and reflecting consensus or broad agreement.”  The United States and its Western allies, however, are trying to supplant that with “other rules developed in closed, non-inclusive formats” that bypassed the UN. Neither Wang nor Lavrov offered many specifics, but they clearly were alluding to such “non-inclusive formats” as the G7 Summit and NATO. In short, Lavrov said, the West has abandoned the truly multilateral norms of international law and “now requires everyone to follow its rules and observe its order.”

The logic behind Beijing’s and Moscow’s resistance to Washington’s “rule-based order” is further illuminated by their comments at the council meeting on the principle of “sovereign equality” among states. In thinly-veiled criticism of both China and Russia, Blinken explained this principle as one that is violated when a state “purports to redraw the borders of another [read Ukraine], or seeks to resolve territorial disputes by using or threatening force [read Taiwan and the East and South China Seas]”; claims “a sphere of influence to dictate or coerce the choices or decisions of another country”; deploys “disinformation or weaponized corruption”; or “undermines other countries’ free and fair elections and democratic institutions.”

Beijing and Moscow, of course, deny doing any of these things, based in part on what they define as their own sovereign territory. Also, they cling to claims that Washington itself is often coercive and interventionist and covets a sphere of influence; or outright disavowal of influence operations. Instead, the notion of “sovereign equality” gives Beijing and Moscow the opportunity to talk about what Wang called “democracy in international relations.” This expression essentially describes giving an equal voice to all countries in the world, especially those that were not party to the establishment of what the United States refers to as the “rules-based order.” Dozens of those countries were still colonies rather than independent states when the UN was chartered in 1945. Wang said the UN “needs to pay more attention to the difficulties facing developing nations, make their voices heard, address their concerns, and protect their rights and interests.” This is necessary to “make the global governance system more just and equitable.” Moreover, “we should respect diversity” because “every country has its unique history and culture, and needs to take a path of development suited to its own realities.” Lavrov reinforced this idea by noting that “new centers of economic growth [and] financial and political influence are gaining strength,” thus “forming an international multipolar system.” He warned, however, that “Western countries have tried to reverse the process of forming a polycentric world,” which he criticized as an attempt to “slow down the course of history.”

These themes are central to a core element of Beijing’s global agenda, which to a large extent, Moscow shares. These themes include capitalizing on the plurality of developing countries that Chinese (and Russian) leaders calculate are well-disposed toward the principles of non-interference in the internal affairs of other countries and the peaceful coexistence between different governing systems. Wang describes this as “paths of development.” This is what Beijing is talking about when it advocates “reform of global governance.” It means making multilateral organizations more representative of the developing world and East Asia, neither of which in China’s view is adequately represented in the structure of the “rules-based order” that the United States and its Western allies took the lead in creating after World War II. Beijing and Moscow calculate that many if not most of these countries will join them in resisting Washington’s “values” diplomacy—its emphasis on democracy promotion.

This is evidence of what the Biden administration has referred to as the competition between democracy and autocracy. Beijing’s goal is not to impose autocracy on other countries but to secure their tacit endorsement of it as a legitimate way to govern. And Chinese leaders anticipate a large global constituency for this idea among countries that—like China and Russia—do not welcome American advice or pressure on how they should govern themselves.  When Beijing invokes the UN Charter, no doubt one of its favorite clauses is in Article 2, Section 7. This section states that “nothing contained in the present Charter shall authorize the United Nations to intervene in matters which are essentially within the domestic jurisdiction of any state.”

In his speech, however, Blinken refuted Beijing’s interpretation. “Some argue that what governments do within their own borders is their own business . . . But the Universal Declaration of Human Rights begins with the word ‘universal’ because our nations agreed that there are certain rights to which every person, everywhere, is entitled,” he said. In effect, Washington’s position is that the imperative to protect human rights transcends the principle of nonintervention. But Wang sidestepped this by highlighting what amounts to Beijing’s alternative definition of human rights. Noting that 2021 is the centenary of the founding of the Chinese Communist Party, he stressed that Beijing under the party’s leadership has “successfully eradicated extreme poverty” in China. This reflects Beijing’s long-standing view that meeting the economic needs of over a billion people has fulfilled their most basic human right, and the one they are most interested in.

Paradoxically, both Wang and Lavrov turned the American position on its head by accusing the United States of being the power that is injecting ideology into geopolitics by trying to impose its definition of democracy on other countries. This, according to Wang, “conflicts with the spirit of multilateralism” and with the promotion of “democracy in international relations [emphasis added].”  Lavrov went further, attacking the Biden administration’s proposal for a “Democracy Summit” as “establishment of a new club . . . with a clearly ideological nature”; he even accused Washington of trying “to impose totalitarianism in global affairs” by forcing other countries to adopt the Western model.

Given these diverging interpretations of “international law,” “sovereignty,” “human rights,” and the “rules-based order,” it is difficult to foresee near-term progress in American, Chinese, and Russian cooperation in the multilateral realm. This is not for lack of rhetorical support for such cooperation. Blinken asserted that the United States will “work with any country on these issues [global challenges like climate change and COVID-19]—including those with whom we have serious differences.” Lavrov said he agreed with Blinken “that no country can overcome such global threats to the lives of our citizens alone.”  Wang recommended that they “firmly commit to the path of cooperation, mutual benefit, and win-win . . . on the basis of equality and mutual respect.”

But the level of strategic mistrust and willful misunderstanding, and the apparent emphasis among the parties on competition over cooperation, suggest that any such collaboration will be incremental at best. Wang’s recommendation echoed Beijing’s longstanding proposal for a “new type of great power relations,” which Washington has dismissed as a Chinese attempt to dictate the terms of the bilateral relationship.  Blinken told the UNSC that the United States “will spare no effort to find and stand on common ground with any country that upholds its commitments to the order which we founded together.” But Beijing and Moscow do not subscribe to Washington’s vision of that order, and they have their own interpretation of their commitments to that order—however, it is defined. It is hard to start a game without agreement on either the playing field or the rules.