Why the U.S. Military Is Devoted to Cultivating Ideological Hygiene 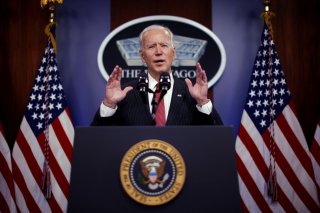 In the aftermath of Nidal Malik Hasan’s shooting spree at Fort Hood, Texas, the Pentagon mourned not the scores wounded or the thirteen killed—including an unborn child—by a self-professed jihadist, but the near-death of a sacred cow.

“As horrific as this tragedy was, if our diversity becomes a casualty, I think that's worse,” said Gen. George Casey, the Army’s chief of staff at the time.

As far as the Pentagon is concerned, and despite evidence that Hasan was in communication with Al Qaeda leader Anwar al-Awlaki before the attack, the incident was merely a case of “workplace violence.” Thus, the victims of the shooting were denied Purple Hearts and full benefits for six years.

U.S. military leadership’s domestic threat priorities have struck many as strange for the last few years. The Defense Department is now more devoted than ever to ferreting out troops swimming against left-wing currents surging beneath the gale of “diversity and inclusion.”

In late January, the New York Times reported that the recently approved National Defense Authorization Act for fiscal 2021, “which sets annual Pentagon policy and spending priorities, contained measures meant to help the department address the issue, including a new position in the Defense Department inspector general’s office: a deputy inspector general for diversity and inclusion and supremacist, extremism and criminal gang activity.”

“Congress also charged the inspector general with establishing a 'mechanism to track and report' extremist or gang activity in the military,” the New York Times noted. However, it appears these efforts are more about cultivating ideological hygiene than rooting out threats.

Internal Defense Department documents reviewed by The Intercept show that “the Pentagon plans to launch a pilot program for screening social media content for extremist material.” One senior Pentagon official told The Intercept that the department would rely on a private surveillance firm “to circumvent First Amendment restrictions on government monitoring.” In other words, the government thinks that private corporations have more leeway to tread on citizens’ rights—and not a few conservative and libertarian think tanks might agree.

During a Pentagon briefing in late March, Bishop Garrison, a senior adviser to the secretary of defense, led an extremism steering committee about designing a pilot program to trawl through social media to “continuously” monitor military personnel for “concerning behaviors.” He now helms the new Countering Extremism Working Group at the forefront of this effort. Some people see Garrison as a “racial extremist.”

In a 2019 article for Inkstick, Garrison painted an apocalyptic picture of all-pervading white malevolence. “We will continue to face the nation-ending threat of white supremacy and white nationalist extremism unless we invest in Combating Violent Extremism (CVE) programs, which [the Trump] administration has cut, and find the courage to have honest-to-God difficult, uncomfortable conversations in our homes and communities about our history of race and privilege in America and how it has shaped our lives today,” he said.

A leaked DARPA memo from March 2021 titled Extremism and Insider Threat in the DoD shows that a whole new world of forbidden associations, thoughts, and opinions will be patrolled under Garrison’s watch. Judging by his prolific and public statements, which range from condemning the Trump administration as a white supremacist enterprise to demanding unflinching support for Black Lives Matter from veteran service organizations, it’s not hard to guess how this will go. The Pentagon is already claiming the scalps of dissenters.

The military recently relieved Lt. Col. Matthew Lohmeier, a Space Force commander, of his responsibilities at Buckley Air Force Base, Colorado, after he claimed in an interview that queer strains of Marxism had infected the bloodstream of the military. “The diversity, inclusion and equity industry and the trainings we are receiving in the military . . . is rooted in critical race theory, which is rooted in Marxism,” Lohmeier said.

Space Force said in a statement to the Washington Examiner that he was dismissed “due to loss of trust and confidence in his ability to lead.”

The Pentagon, he said in another interview, distributes videos to military personnel that portrays America as “evil, that it was founded in 1619 and not 1776, and that whites are inherently evil.” Garrison, who explicitly links his support to the 1619 Project with his ideological anti-extremism efforts, would agree—and so would West Point Cadet Spenser Rapone.

Rapone graduated from West Point in May 2016. He served as a second lieutenant with the 2nd Brigade Combat Team, 10th Mountain Division, based in Fort Drum, New York. He started but did not complete Ranger training at Fort Benning, Georgia. And in 2018, he separated from the military after scandalous photos of him surfaced, including one in which he raised a fist and wrote inside his cap: Communism will win.

Between 2015 and 2017, Rapone’s social media posts consisted of identifying himself as an “official socialist organizer” of the Democratic Socialists of America, criticizing “white privilege,” supporting the abolishment of West Point, and advocating for a socialist revolution. The military was aware of Rapone’s radicalism but seemed to have dragged its feet dealing with him. Rapone’s activities were reported on in the summer of 2017 by MilitaryCorruption.com before going viral that fall. He was initially disciplined at West Point but still allowed to graduate. Lohmeier, who held a position of authority, was not given the same courtesy. After finally separating from the military, Rapone told the Associated Press that there “are a lot of veterans both active duty and not that feel like I do.”

In February 2020, American defense firm Honeywell received a fifteen-year contract from the Department of Defense with a potential value of up to $3.5 billion. Amid the Black Lives Matter riots in June, Honeywell charitably issued a statement about how “racism continues to persist in our society,” and pledged its commitment to the “principles of Inclusion and Diversity.”

A year later, the State Department announced it reached a $13 million settlement with Honeywell. The firm had shared information related to weapons technology—such as technical drawings of parts for F-35 stealth fighter jets—with other countries, including China, between 2011 and 2015.

Honeywell’s actions “harmed U.S. national security,” according to the Bureau of Political-Military Affairs. So, why is the company still doing business with the government? Because, the State Department said in a statement, Honeywell “acknowledged the serious nature of the alleged violations, cooperated with the Department's review, and instituted a number of compliance program improvements during the course of the Department's review.” Put simply, the government didn’t debar Honeywell because the firm apologized.

Under the mantra of diversity and inclusion, then, state apparatuses are overseeing a program of ideological conformity helmed by radicals while defense contractors co-opt the rhetoric of social justice to mask misdeeds. The military is increasingly turning its eye on domestic affairs, starting with monitoring the private lives of its personnel. Indeed, the Pentagon is aware that it is wading into new waters by partnering with corporations for domestic surveillance operations “to circumvent First Amendment restrictions.” And as long as this advances behind Garrison’s bugaboo of “nation-ending threat of white supremacy,” few people seem willing to speak up about it as Lohmeier did.

Pedro L. Gonzalez is a Senior Writer for American Greatness.