Will the Afghanistan Withdrawal Lead to Middle East Peace? 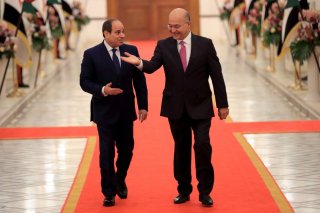 The recent Baghdad Summit in August 2021 highlighted Iraq’s determination to promote stability and peace in the Middle East by facilitating greater dialogue among the countries of western Asia. Disappointingly, though perhaps unsurprisingly, the summit itself was not a great success; Though it may have lowered the regional temperature, it brought no new “breakthrough” moments in the relationship between Iran and Saudi Arabia, the two nations that sought to gain the most from the meeting. However, the conference was still important: for the first time in recent history, it brought many sets of rivals—Saudi Arabia and Iran, Turkey and the United Arab Emirates, and Qatar and Egypt—to the same table for talks about peacefully resolving the challenging issues facing the region.

The Baghdad Summit’s participants included the heads of state of Egypt, France, Jordan, and Qatar, as well as the UAE’s vice president and prime minister and Iran, Saudi Arabia, and Turkey’s chief diplomats. Not all in the region had representation at this conference—no officials from Bahrain, Oman, or Syria were present—but it was nonetheless the most significant and wide-ranging peace conference the Middle East had seen since the onset of the Arab Spring in 2011, and emblematic of a wider shift away from regional confrontation.

Indeed, the Iraqis hosted the summit at a time when many governments in the Middle East are backing down from their more maximalist foreign policy positions from the Trump era and embracing new approaches to regional affairs. While ideological friction continues to fuel tensions between various states in the region, most sets of rivals in the Middle East are increasingly seeing it as serving their interests to open more dialogue. Diplomatic engagement and accommodation are slowly but surely replacing hawkishness and bellicosity, as witnessed throughout the region this year.

This trend is primarily driven by political factors in the United States. The Trump presidency has ended, and the actions of President Joe Biden, who has appeared less supportive and more critical of authoritarian regimes in the region—and, as the events of the previous month in Afghanistan have shown, far less willing to risk the lives of American soldiers to defend them. The classic bargain underpinning the U.S. presence in the Middle East—namely, security guarantees in exchange for a cheap and reliable supply of oil—appears to have come to an abrupt halt, and its absence has left some states in the Middle East seriously concerned about their relations with the United States. In marked contrast to the Trump era, when the United States firmly committed itself (at least in rhetoric) to the old bargain, leaders of countries like Saudi Arabia no longer believe that Washington “has their back” politically. This in turn has pushed Riyadh and other Middle Eastern capitals to invest in efforts to improve ties with their neighbors. Moreover, the new economic realities created by Covid-19 have caused more states in the region to desire less costly foreign policies and to seek new opportunities for economic cooperation with more countries, including those on opposite sides of geopolitical and ideological divides.

Throughout 2021, there have been varying degrees of tension eased in the region’s many complicated and interwoven rivalries. That all these states had representatives at the Baghdad Summit bodes well for a continuation of efforts aimed at lowering temperatures in the Middle East.

In April, the Saudis and Iranians quietly began to engage each other in a series of low-level talks—initially conducted in Baghdad, but later expanding to Qatar and Oman. When these talks commenced earlier this year, it was the first time that any real diplomatic engagement had taken place between the two countries since they severed diplomatic ties in January 2016, dramatically escalating geopolitical and sectarian tensions in the Middle East.

Experts have pointed to the attacks on Saudi Aramco in September 2019, which Iran was widely assumed to bear responsibility for despite its denials, as an important event that drove Riyadh to conclude that talking to Iran would suit Saudi interests better than isolation would. Those attacks targeted the engine of the Saudi economy, and the Trump administration’s lack of a substantive response left the Saudi leadership with a clearer understanding of the extent to which the kingdom is vulnerable to Iran’s conduct. Crucially, the high-tech and advanced weaponry sold to Riyadh by the United States did not prevent the attack, underscoring the limitations of military hardware as a substitute for engagement.

Although the Saudis and Iranians have yet to reach a major breakthrough that produces any new understanding between Riyadh and Tehran, the fact that the two sides have been talking since April is a positive sign. Of course, high levels of distrust have built up between the two countries, which will make it difficult for talks to quickly lead to fundamental changes in how the two regimes view the other. Ultimately, diplomacy can only take Saudi Arabia and Iran so far: there are countless issues in the region that pit the two against each other, and to expect a total détente is not realistic. Nonetheless, 2021 has been a year in which Riyadh and Tehran, to their credit, have taken steps to manage, rather than escalate, their problems.

Turkey and the UAE

Since the Arab Spring erupted in 2011, and particularly since the failed Turkish coup attempt of 2016, relations between Turkey and the UAE have suffered greatly. It is safe to say that Turkey’s foreign policy has clashed with no Gulf Cooperation Council (GCC) member state more than the UAE. In recent years, officials and commentators in Ankara and Abu Dhabi have harshly criticized each other.

Nonetheless, both sides have taken steps to “inch towards reconciliation” in recent months. In January, Anwar Gargash, who currently serves as a diplomatic adviser to the UAE’s President Sheikh Khalifa bin Zayed Al Nahyan, stated that his country has no problems with Ankara. Two months later, Turkey’s top diplomat, Mevlut Cavusoglu, declared that Turkey had “no reason” to not work to mend relations with Abu Dhabi if the UAE would commit to taking a “positive step.” It was important for the Emirati-Turkish thaw when the UAE’s national security advisor, Sheikh Tahnoun Bin Zayed Al Nahyan (TbZ), visited President Recep Tayyip Erdogan in Ankara last month.

Turkey and the UAE are both facing economic challenges during this period, which are key variables in this equation. The Turks want to capitalize on the outcome of the January 2021 Al-Ula summit to deepen economic relations with the Gulf states that were on the opposite side of the GCC’s Qatar rift. In practice, this means bringing more Saudi and Emirati investment into the Turkish economy at a time in which it suffers from many problems. The UAE is forced to contend with what might become a new geopolitical order in the Gulf region, in which the United States is far less committed to Gulf security than it has been in past decades. Within this context, as the Emiratis prepare for the “post-U.S. period,” officials in Abu Dhabi seem to believe that easing the UAE’s tensions with Turkey, as well as with Qatar and Iran, serves the Emirates’ long-term interests.

At the end of the day, it is difficult to imagine the Turkey-UAE relationship becoming friendly any time soon. The governments in Ankara and Abu Dhabi view the Middle East very differently, particularly with respect to fundamental questions about the role of political Islam in the Arab and Muslim world. The UAE has a rigid view of the Muslim Brotherhood, which Turkey supports ideologically and financially, as a terrorist group. These differences are unlikely to be rectified simply through bilateral visits. But in a new era of reconciliation across the region, there is perhaps good reason to hope for the Turks and Emiratis to take advantage of more opportunities to pursue a rapprochement throughout the remainder of 2021.

On August 31, Erdogan and Crown Prince of Abu Dhabi Mohammed bin Zayed had a phone call that is being hailed as the start of a “new phase” in bilateral affairs. According to Gargash, the UAE is about to make “serious investments” in Turkey, which could help facilitate a better chapter in Turkey-UAE relations that seems to have started in the post-Trump era. Nonetheless, the extent to which Ankara and Abu Dhabi can accommodate the other in regional hotspots such as Libya, Syria, and the Horn of Africa remains to be seen.

Like its close GCC allies, Egypt has had to come to terms with the Biden administration as well as the dire economic consequences of Covid-19. As a result, Cairo has recalibrated its foreign policy. The extent to which Egypt has improved its relationship with Qatar is a case in point.

As the first of the blockading states to restore official diplomatic relations with Doha at the beginning of 2021, Egypt has appeared keen to let bygones be bygones and move past the four-year siege of Qatar. Worried about the implications of Biden’s presidency for U.S.-Egypt relations, President Abdel Fattah el-Sisi is adopting a pragmatic approach to its relationship with Washington in the post-Trump era. Cairo’s rapprochement with Doha, and Egypt’s work with the Qataris to mediate a Hamas-Israel ceasefire in May 2021, have both served to improve Sisi’s reputation with Biden.