Will Germany Be the Next Nuclear Weapons State? 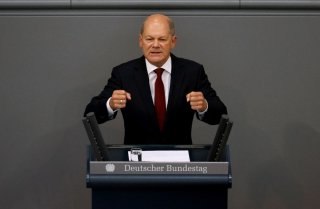 One major consequence of Germany’s strategic reorientation, or Zeitenwende, will be a reinvigorated debate about the development of a nuclear deterrent. This is an issue that no one in Germany wants to discuss given its history and aversion to all things nuclear. However, this will become an unavoidable question facing German policymakers in the medium term. Russian leader Vladimir Putin’s reckless war in Ukraine and his threat to use nuclear weapons have made it clear that the issue of nuclear deterrence is now very much front and center in European security policy.

The Russian invasion of Ukraine marks the end of the post-Cold War security arrangement reached with German unification in 1990. All of the assumptions and policies shaped around that settlement are now dead, including Germany’s commitment to not produce or possess weapons of mass destruction. A recent speech by German president Frank-Walter Steinmeier, who was a proponent of close relations with Moscow for many years, makes it clear that Berlin now views Russia as a threat for the foreseeable future. Accordingly, this reopens Berlin’s commitment to the Non-Proliferation Treaty (NPT) and its reliance on the U.S. nuclear deterrent as the bedrock of its security policy.

The major factors inhibiting the development of a German nuclear force are now much weaker. These include arms control agreements, the credibility of the U.S. deterrent, Germany’s retreat from its civilian nuclear power program, domestic resistance to a nuclear force, and the fear that a nuclear-armed Germany would revive the “German question” with its European partners.

On the strategic level, there has been a clear role reversal from the Cold War when NATO was concerned about the conventional superiority of the Soviet Union. Today, it is abundantly clear that the main threat to German and European security does not come from Russian conventional forces but from nuclear blackmail and hybrid war. The Russian military’s failure in the conventional area has pushed Moscow to rely on nuclear blackmail in Ukraine. However, this is not a new development. Russia announced a first-use policy years ago on the rationale that nuclear weapons would prevent the escalation of a conventional conflict. The rationale for the U.S. deployment of intermediate nuclear forces on German soil in the 1980s was seen as a way of preventing Russia from using nuclear blackmail.

The implications of these developments are already being drawn out in Washington and Paris. The 2022 Nuclear Posture Review allows for the possibility of nuclear first use in American doctrine and President Emmanuel Macron recently made it clear that the French deterrent is there to protect and defend French territory, and does not extend to its European partners. Additionally, Germany cannot rely anymore on the United States to be a stable partner given the dysfunction of American democracy and increasingly isolationist trends within the Republican Party, as well as the strategic shift in U.S. policy towards China.

Germany had a discussion in the late 1960s about whether it should have a nuclear force, something that Defense Minister Franz Josef Strauss advocated for. This was averted by the proposal of a so-called multilateral force (MLF) which was proposed by NATO as an alternative to an independent German nuclear force. MLF never saw the light of day and Germany was given a role in the nuclear planning group of NATO as compensation. It agreed to sign the NPT and renounced the production of atomic, biological, and chemical weapons.

During the presidency of Donald Trump, this discussion was revived given the loss of confidence in U.S. policy. In 2018, the distinguished political scientist Christian Hacke published an op-ed in Welt am Sonntag arguing that “Germany’s new role as enemy number one of the American President forces Germany to a radical rethinking of its security policy.” He explained that “Germany is for the first time since 1949 without the nuclear umbrella of the United States. Germany is defenseless in case of an extreme crisis.” Hacke was not alone in raising this point. The leading defense expert of the Christian Democrats in the Bundestag, Roderich Kiesewetter, made this case as well. Alexander Graf Lambsdorff, the vice chair of the Free Democrats and its leading foreign policy expert, agreed that German policymakers must openly discuss this issue. “The end of the Cold War did in no way end the era of atomic weapons—one can lament this but that is the reality.”

Another key factor limiting Germany’s nuclear options relates to the shutdown of its civilian nuclear power facilities, which was first announced by Chancellor Angela Merkel in 2011 and is scheduled to be completed this year. As Ulrich Kuehne, Tristan Volpe, and Bert Thompson have contended, the planned phase-out of nuclear power makes it more difficult and costly to start a military nuclear program. While Japan and Iran could go nuclear quite quickly, this would not be the case for Germany. However, Berlin’s decision to shut down its nuclear power plants has been delayed by Putin’s war in Ukraine and the resulting energy cut-off. Therefore, Germany will soon have the ability to utilize its civilian nuclear expertise for military purposes on short notice.

Of course, this would be a very difficult policy to sell at home. Not only is there an empowered Green Party which has been anti-nuclear since its founding but also a strong pacifist strain on the Left, particularly in the Social Democratic Party (SPD) and the Greens. But Germany is being forced to reconsider its nuclear stance given the geostrategic environment. Already the Greens and the SPD have been forced to modify their views on military and climate policy. A further deterioration of the European geostrategic environment will lead to more changes in future governing coalitions.

Finally, there is the concern that a nuclear force would reopen the German question and incentivize the organization of countervailing European coalitions. Yet, the Ukraine crisis has made it clear that Europe is more concerned about a lack of German leadership in defense and not with strengthening its deterrence. As Steinmeier observed, Germany is now faced with some very difficult choices. A nuclear North Korea, a nuclear curious Iran, and the prospect of Japan and South Korea becoming nuclear powers begs the question: Why should Germany stay behind given its power and centrality to European security? The Russian military is so degraded that there is no reason why Europe and Germany can’t provide an alternative conventional and nuclear deterrent. Putin may have been surprised by the reactions in Finland and Sweden to his invasion but he may be even more surprised by the long-term reaction in Germany to his brutal policies.

Stephen F. Szabo is an Adjunct Professor at the BMW Center for German and European Studies, Georgetown University, and author of Germany, Russia and the Rise of Geo-economics.