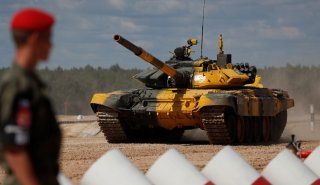 We may soon learn whether the Monroe Doctrine silently endures as a core principle of U.S. foreign policy and grand strategy. Russian deputy foreign minister Sergei Ryabkov hinted rather pointedly last week that Moscow is prepared to deploy troops and missiles to Cuba and Venezuela. Ryabkov’s remarks came in the context of Russia’s much-discussed military buildup near its border with Ukraine. Meanwhile, Moscow has demanded a rollback of NATO force deployments in the former Soviet sphere. All of these events have fanned frantic Western efforts to forestall aggression against Ukraine.

U.S. national security adviser Jake Sullivan called Ryabkov’s words “bluster.” However, there is precedent for Moscow to make mischief in the Western Hemisphere in response to American actions in the Russian near abroad. In 1962, the Soviet Union dispatched nuclear forces to Cuba after the United States stationed nuclear weapons in Turkey, a NATO ally near Soviet frontiers. The U.S. Navy mounted a quarantine of the waters around Cuba—a blockade by any other name—to keep cargo ships bearing Soviet weaponry from reaching the island. The two superpowers careened toward war—perhaps atomic war.

To avert nuclear Armageddon, the John F. Kennedy administration and Soviet premier Nikita Khruschev’s government struck a compromise. Moscow withdrew its weapons-laden ships from the Caribbean while Washington removed its missiles from Turkey and pledged not to invade Cuba. Shifting the pattern of Soviet-American power politics paid off for Moscow in the 1960s; it’s far from unthinkable that Russia might try something similar today.

And there may be sound strategic logic to such a countermove. Moscow may believe that it could siphon disproportionate U.S. military and diplomatic resources away from eastern Europe by staging a token deployment in the United States’ geographic environs. In that case, it might well make sense for Putin and company to do so. What if they do?

If there’s a historical precedent for Russian troublemaking, there is also a precedent that illuminates how the United States responds to external challenges in the Americas. President James Monroe and his secretary of state, John Quincy Adams, enunciated Monroe’s namesake foreign policy doctrine in 1823 in hopes of preventing European empires from restoring their rule in Latin America after being evicted during a spate of revolutions.

The doctrine appeared in two separate passages from Monroe’s 1823 message to Congress, the forerunner to today’s State of the Union address. Interestingly, Monroe and Adams framed it in response to an entreaty from Russia. The imperial government in St. Petersburg wanted to negotiate the “respective rights and interests” of the United States and Russia “on the northwest coast” of North America. Russia, a resident power in the Western Hemisphere at the time, held Alaska as well as parcels of land as far south as California. The “principle” of the Monroe Doctrine is that “the American continents, by the free and independent condition which they have assumed and maintain, are henceforth not to be considered as subjects for future colonization by any European powers.” The key word was “future.” U.S. statesmen forbade new colonization and, by implication, a restoration of imperial rule by proxy. They did not vow to expel European empires from their colonies as they stood in 1823.

The status quo message came through even more resoundingly in the second passage:

“We should consider any attempt on [European great powers’] part to extend their system to any portion of this hemisphere as dangerous to our peace and safety. With the existing colonies or dependencies of any European power we have not interfered and shall not interfere. But with the governments who have declared their independence and maintain it, and whose independence we have . . . acknowledged, we could not view any interposition for the purpose of oppressing them, or controlling in any other manner their destiny . . . in any other light than as the manifestation of an unfriendly disposition toward the United States.”

Now, it’s important to note that the Monroe Doctrine remained a lodestar of U.S. foreign policy and strategy until the U.S. government disavowed it in the 1920s. More precisely, the United States disavowed Theodore Roosevelt’s “corollary” to the doctrine, covered below, after Roosevelt’s successors abused it during the 1910s and 1920s—and deeply affronted Latin Americans. But few invoked the parent doctrine after the repeal of its corollary. That being the case, the doctrine underwent several permutations as time, circumstances, and politics warranted. In effect, there were several Monroe Doctrines under the same hands-off principle. Each offers a potential future for U.S. strategy vis-à-vis Russian or Chinese encroachment in the Western Hemisphere.

The original version of the Monroe Doctrine has little bearing on current circumstances. The United States had no navy or army to enforce the doctrine for most of the nineteenth century. In fact, it depended on the British Royal Navy as a silent enforcer. Great Britain had reasons to keep European rivals from establishing or re-establishing colonies in the Americas. This convergence of interests let the United States freeride on maritime security provided by the erstwhile mother country. Washington got to stand on principle without power. There is no analog to Great Britain to keep order in the Western Hemisphere today. Either the United States and its partners in the inter-American system do it, or no one will.

Fast-forward to the second incarnation of the Monroe Doctrine. In 1883, Congress saw fit to fund the U.S. Navy’s first heavyweight battle fleet. Now Washington could put steel behind the Monroe Doctrine rather than trust outsiders to do it. This was a happy coincidence. By the end of the century, London started withdrawing its North American squadron to run a naval arms race with imperial Germany. From then on, the United States had to back up its hemispheric policies with its own national resources.

By 1895, U.S. leaders felt strong enough to demand the right to mediate a border dispute between Britain and Venezuela that threatened to ignite a war in the Caribbean. In a tart exchange with British leaders, President Grover Cleveland’s secretary of state, Richard Olney, declared that “today the United States is practically sovereign on this continent and its fiat is law upon the subjects to which it confines its interposition . . . its infinite resources combined with its isolated position render it master of the situation and practically invulnerable as against any or all other powers.”

Sovereignty derives from a monopoly on physical force within the borders where the sovereign reigns. Olney seemed to anoint the United States as the sovereign over half of the globe, with the right to determine what outsiders could do there and enforce its will. The Monroe Doctrine, as reinterpreted by Olney and Cleveland, was a strongman doctrine that matched principle with overbearing power. If America was prepared to exert itself to fend off a war between two foreign powers back then, it might well be prepared to do so today to fend off a direct threat. The proprietary instinct may persist. America might renew its strongman doctrine without invoking the name of James Monroe.

As noted above, Theodore Roosevelt had his own take on the Monroe Doctrine, grafting an “international police power” onto it. The basic idea underlying the Roosevelt Corollary was that the United States claimed the right to intervene in Latin American affairs when a Caribbean country’s indebtedness to some European bank raised the prospect of a great power seizing territory in the New World. When a government defaulted on its loans, the standard practice for the day was for bankers to appeal to their government. If unable to resolve the matter through diplomacy, government overseers sent the fleet to wrest the customhouse from the debtor country and collect tariff revenue sufficient to repay the bank. In 1904, a crisis of this type afflicted the Dominican Republic, prompting Roosevelt to articulate his corollary.

Roosevelt believed that governments must honor their international obligations, but he also deplored forcible European debt collection. He reasoned that once a great power navy occupied American ground, it might keep that ground rather than give it back. Such a great power might even construct a naval base on the site, threatening Western Hemisphere shipping lanes. So, if a Caribbean government proved unable or unwilling to fulfill its obligations, Roosevelt reserved the right to do the intervening—and deny European empires any pretext to establish colonies. This was a constabulary doctrine. However, it’s hard to see how it would apply today. Presumably, Russia has no intention of grabbing territory from Cuba or Venezuela. Thus, Washington will have little cause to intervene on constabulary grounds.

The last model of the Monroe Doctrine was the Cuban Missile Crisis itself. In that case, a dominant United States mounted a naval blockade to ward off a missile threat close to home while compromising in Eurasia to preserve the integrity of the Americas. This was a Monroe Doctrine for an American world power navigating the nuclear age. Doubtless, this is the sort of reciprocity Moscow craves today. Moscow could offer to stay out of the Caribbean basin in exchange for autonomy in the former Soviet empire. We can call it the Kennedy-Khruschev model for managing relations between peer superpowers.