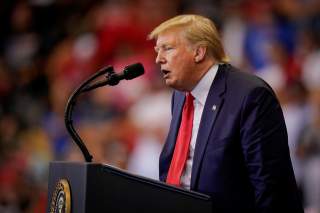 After the second round of Democratic debates earlier this week, President Donald Trump hosted a rally in Cincinnati, Ohio, that provides a window into his reelection strategy. “But there never has been a movement like this. This is a movement the likes of which they’ve never seen before, maybe anywhere, but certainly in this country,” Trump said, embracing his designation as leader of a populist movement. “You came from the mountains, and the valleys, and the rivers, and you came, I mean look, from wherever you came from, there were a lot of you.”

It was non-urban areas that elected Trump in 2016, and it will likely have to be what wins him reelection in 2020. Despite losing the popular vote by three million, Trump won a solid margin in the electoral college by marginally increasing vote tallies in Michigan, Wisconsin, and Pennsylvania.

“I was watching the so-called debate last night. And I also watched the night before. That was long, long television. And the Democrats spent more time attacking Barack Obama than they did attacking me, practically,” said Trump.

The Trump campaign hopes to run against a progressive Democrat that they can paint as too far left for American voters. Trump’s approval ratings have hovered in the low forties since his inauguration, and his safest bet at reelection is facing off against a candidate whose ideas are even less popular.

“The Democrat Party is now being led by four left-wing extremists who reject everything that we hold dear,” Trump told his supporters, referring to “the Squad” of freshman congresswomen who have quickly become the faces the political progressivism. “No matter what label they use, a vote for any Democrat in 2020 is a vote for the rise of radical socialism and the destruction of our great, our beautiful, our wonderful American dream. We’re not going to let our country ever go down the route of socialism.”

A progressive nominee would turn the ballot from being about Trump to being about how leftwing the Democrats have become. And it would allow Trump to campaign on his favorite issue, immigration.

“The greatest betrayal committed by the Democrats is their support for open borders. And these open borders would overwhelm schools and hospitals, drain public services, and flood communities with poisonous drugs,” Trump said. “Democrat lawmakers care more about illegal aliens than they care about their own constituents. They put foreign citizens before American citizens. We’re not going to do that.”

Trump would be able to campaign both on the border crisis, and the actions he’s taken to stem it. “I’m starting to like Mexico a lot. They do a lot more for us than the Democrats do,” Trump joked, referencing the thousands of soldiers Mexico has deployed to the border after Trump threatened punitive tariffs.

The cog in this strategy is former Vice President Joe Biden, the Democratic frontrunner who currently has a fifteen-point lead over his competitors. Biden has stuck to a moderate tact and opposes eliminating private health insurance and decriminalizing illegal entry at the U.S.-Mexico border.

It will be hard to characterize the affable, familiar face of Joe Biden as “rage-filled,” which is how Trump described the Democrats-at-large. Even Trump’s nickname for his would-be opponent, “Sleepy Joe,” does not invoke images of socialist radicalism.

Trump won Ohio, the site of his rally, by over eight points in 2016. Recent polling gives Biden an eight-point advantage in the Buckeye State. In fact, the three-time presidential candidate has promised to win back the entire Midwest.

Trump’s personality and campaign strategy have always favored offense over defense, putting opponents back on their heels through a barrage of attacks. It’s harder to promise to “Keep America Great” than it was to “Make America Great Again.”