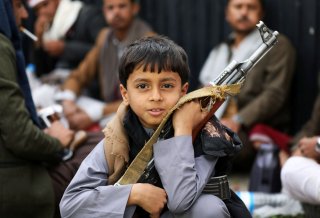 For the coming administration of presumptive President-elect Joe Biden, assuming a leadership role in diplomatic efforts to resolve Yemen’s civil war could offer a “new beginning” for U.S. relations in the Middle East.

Yemen stands at a crossroads. A nation rent in two by a six-year civil war, Yemen is well on its way to becoming one of the world’s preeminent breeding grounds for violent extremism and a safe haven for transnational terrorist groups. The conflict has become a proxy war between Iran and Saudi Arabia, two countries that have aided and abetted the war’s antagonists for their own ends. The war has killed more than one-quarter million Yemenis. Additionally, 150,000 children have died from starvation and left Yemen on the brink of collapse. The situation is frighteningly reminiscent of conditions in 1990s Afghanistan that gave rise to the Taliban and enabled Al Qaeda.

But there is another potential pathway forward for Yemen. While the United Nations-led peace talks have struggled to make progress towards national reconciliation, there could be a more gradual and long-term pathway toward peace that offers promise. It is a pathway that may require the type of international leadership and vision that only the United States can offer.

Like it or not, U.S. interests in the Middle East crucially depend on stability in the Arabian Gulf. Yemen’s geostrategic location—neighboring key U.S. allies and waterways critical to global commerce—along with the presence of violent non-state actors, both Iranian-backed Shia militias and Sunni jihadists, makes for a volatile mix that could threaten U.S. interests. Resolving the civil war in Yemen may not serve just these interests, but also could help end the world’s worst humanitarian crisis.

While the foundations of peace must be Yemeni-led, there is much that the new administration could do to support this process. The first and most important choice is simple, though fraught with risk: does the United States continue with the current policy focused on national reconciliation, or consider an alternative path?

Given the prevailing political and military conditions on the ground, the prospects for national reconciliation appear dim. Despite the efforts of UN Special Envoy Martin Griffiths, peace talks have stalled between the Iranian-backed Houthis and the internationally-recognized government of Abdrabbuh Mansur Hadi. Both sides have become increasingly entrenched in their positions over time, and there now appears to be little appetite for national reconciliation.

Rather than push for national reconciliation, the incoming administration could look to quickly and decisively defuse the conflict by brokering a durable ceasefire between the Saudis and Houthis. By focusing on more limited objectives, like border security and eliminating Iranian influence, rather than the broader national reconciliation project that is the focus of current UN efforts, the administration could build an interim agreement that ends the violence and opens up the country to immediate humanitarian relief.

The international community might then focus its efforts on rebuilding the south of the country, where a dangerous power vacuum has emerged. Infighting among the Saudi-led coalition has undermined national peace talks and created the conditions ripe for exploitation by Al Qaeda, the Islamic State, and other groups. By contributing to an end to the fighting, the Biden-Harris administration could help prevent this potential terror threat from proliferating. First resolving the challenges in the restive south might ultimately lead to national reconciliation.

Achieving a peaceful resolution to Yemen’s civil war would not necessarily require direct U.S. involvement. The United States cannot be expected to manage the day-to-day demands of the peace process or conduct shuttle diplomacy among the parties. This job is best left to the UN and its Special Envoy to Yemen.

But the UN process has suffered from a lack of coherent and persistent support from the United States. Without committing forces or substantial funds, the United States still could have much to offer, providing leadership, vision, and a clear strategy for ending the conflict. The United States also has unique tools that could be deployed to coerce, persuade, and influence Yemen’s regional partners that have perpetuated the conflict.

A peaceful resolution to the conflict in Yemen is possible, though it may not happen without leadership and commitment from the United States. Success could benefit the Yemeni people and offer an opportunity for the United States to reset its relationships with partners in the Arabian Gulf and across the greater Middle East.

This is the world’s problem, and a peaceful resolution to the conflict could offer a powerful beacon of hope for nations around the world.

Daniel Egel is an economist and Trevor Johnston is a political scientist at the nonprofit, nonpartisan RAND Corporation.