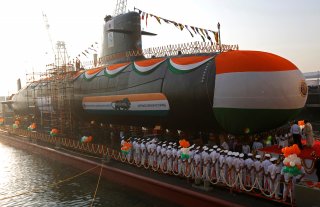 Last month, the Indian government released its list of 101 military systems that would be progressively banned for importation beginning this coming December. As Forbes reported this isn’t the result of a sudden outbreak of pacifism in the subcontinent, but rather New Delhi is seeking to grow its own domestic arms industry. Since 2015, India has spent more on arms imports than any other country in the world after Saudi Arabia.

Now India’s military will increasingly look to indigenous firms for everything from sniper rifles to aircraft to warships. So far the results have been mixed—with the domestically-made Tejas fighter jet as an example.

However, as tensions between New Delhi and Beijing continue, India is now seeking to expand its navy and this includes the construction of the first domestically-built aircraft carrier. This could be necessary for New Delhi to properly defend and control the Indian Ocean—otherwise, it could face invasion overland as well as from the sea.

To counter such an incursion into its waters, and to close the gap with China’s growing naval capabilities, the Indian Navy will start the bidding process next month for an ambitious project to build six indigenous submarines. Those boats would be built in India under its Navy’s P75I submarine program and would be guided by the Ministry of Defence’s (MoD) Strategic Partnership model, which would aim to build indigenous capabilities in order to reduce import dependence.

The Request For Proposal (RFP) for the project has already been billed as one of the largest “Make in India” ventures to date, Navy Recognition reported. The RFP will be issued by October while the Indian MoD has already reportedly shortlisted two Indian shipyards including the L&T Group and the state-owned Mazagaon Docks Ltd (MDL), as well as five foreign defense partners to aid in the project including Germany’s ThyssenKrupp Marine Systems, Spain’s Navantia and France’s Naval Group.

The Project 75I submarines are a follow-on of the Project 75 Kalvari-class submarines, and development for the six boats is expected to be completed by 2022. The Indian Navy could deploy the submarines in a variety of missions including surveillance, intelligence gathering, anti-submarine warfare (ASW), anti-surface warfare (ASuW) and mine laying operations.

The submarines are armed with six torpedo launching tubes, eighteen heavy weapons, tube-launched MBDA SM-39 Exocet anti-ship missiles and precision-guided weapons. All the weapons are carried in weapon launching tubes, which can be easily reloaded at sea. The P751 Scorpene-class also features a pressure hull and superior stealth capabilities. It can accommodate between twenty-five and thirty-one crew members as well as fourteen combat divers.

It would be an ideal submarine that could be used to sneak into the South China Sea and allow the Indian Navy to operate in the region undetected—yet still, make its presence known much like the frontline warship that sailed into the region earlier this week.